Last week as the Matterform guys kicked off ahead of what sounds like a great CES experience for them, they were kind enough to host an AMA on Reddit. If you’re not familiar with Reddit, it is essentially a link aggregator of massive proportions, to the tune of about two billion pageviews a month. Yes, I said billion. The Matterform AMA may not have hit the front page, but based on the traffic in the post, it got their scanner in front of a lot of interested eyes.

The AMA covered a pretty wide range of topics, mostly related to the scanner and its capabilities, but surprisingly several highly upvoted questions tended to focus on the Matterform guys thoughts on the future legalities of being able to scan and reproduce everything in existence. But the AMA also had a surprising variety of interesting and occasionally amusing questions. I’ve rounded up the best, and not so best, of the questions and answers including some of the pictures and scans posted during the informative, albeit brief, AMA. 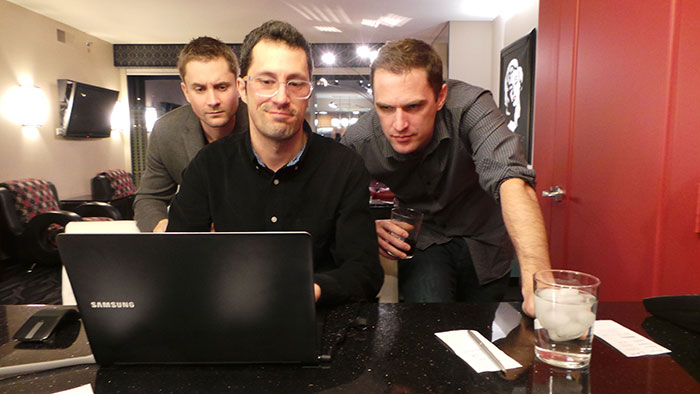 Uzorglemon: “[D]o you think that the 3D printables industry will be hit with the level of legal challenges that has been seen in the music and software industries with regards to intellectual property disputes?”

Matterform3DGuys: “I think that there is a lot of interest in this exact area. We have a lawyer friend who is particularly interested in how this is going to develop. I couldn’t say if there will be a level of legal challenge similar to what’s happened with movies and music, because there isn’t quite the level of consumer buy-in and purpose that movies and music have. I think the moment someone starts replicating patented objects there will be an outcry and legal dispute.”

halestorm23: “What legal limits do you believe will be created concerning what will be allowed to be printed using 3D printers?”

Matterform3DGuys: “I really don’t know. It’s untested, but I hope it doesn’t follow the same path that movies and particularly music have taken. That would just be a huge hassle and headache for everyone. This technology is happening, it’s here right now, and it’s getting better every month. The wisest course of action in my opinion would be for companies like Matterform to reach out to companies who have easily replicable objects and try to find routes of co-operation to ensure everyone can transition into the new technology period.”

indy3dp: “Can you let folks know approx what the resolution of their scans will look like?”

MutantPixel: “I’m wondering about the longevity/flexibility of the units design, do you think it will be possible to increase scan resolution/quality down the road with something like a software update, or have you squeezed every available bit of resolution that is possible into the first generation?”

Matterform3DGuys: “We’ve put a lot into the first revision to get it as high a resolution with the design as possible, but I wouldn’t rule out further improvements in future software revisions. The physical design is important and affords a lot of area coverage during the scan, but the real “magic” is in the math in the software and in the algorithms we’ve developed for laser line and noise removal. We’ve done some really excellent stuff, if I do say so myself. There’s always room for improvement and as we develop more we discover more which can lead to improvement.”

deeeep: “How far is the software side of this? Can you do multiple scans at different angles and merge? Mac?”

Matterform3DGuys: “Thank you! Since April we’ve done a lot of experimenting and research to try to make the scanner as foolproof and easy to use as possible, and all that has been done in Windows. The plan was to develop the technology in Windows and understand exactly how it needs to work, and then do a port to Mac. The R&D for the Windows software is 95% complete and we’re close to the final UI as well. The Mac software is under development but will go much faster than the windows because we already know exactly what each class needs to do and how.

We are going to explore using PCL (Point Cloud Library – which is awesome, by the way) to combine multiple scans into one. This is a feature we really want to include, but it may not make it into the first software revision.”

FM-96: “Will the price of the scanner go up after the pre-order time?”

Matterform3DGuys: “We’re doing everything we can to make sure it doesn’t, but we’re learning a lot as we go and discovering a lot of hidden costs to running a technology business which we hadn’t considered when designing the scanner. And, as we grow there will be more costs. Regardless, our goal is to keep it affordable. Affordability is one of the fundamental parts of what we want Matterform to be.”

letthewookiesin: “[S]ince your product is priced for the consumer market, what are some of the most common uses you predict from your customers?”

Matterform3DGuys: “We know that the scanner will be used by engineers, designers of video games, artists, archeologists and people with 3D printers because those people have pre-ordered. I’d say that at the moment the non-specific consumer demographic is mostly in the 3D printing enthusiast area. In all honesty, there hasn’t yet been a “killer application” for 3D scanning in the consumer space, but we’re definitely in the right place to help people find it.”

Tax_Ninja: “I want a 3D printer, but i have no tech skills. When will [people] like me be able to design and print stuff easily? Also, how long until I can print big items, like a car.”

Matterform3DGuys: “Well, there’s a learning curve to it still, but if you use a service like Shapeways you can get an awesome print which they’ll do and send to you. That said, Afinia set up in the booth across from us and they had a couple of printers running. We haven’t spoken with them yet, but they printed a bolt and nut set and it came out perfectly. We were really impressed – amazing printer. I’m not sure how easy their software is to use, but their printer works well which is a major accomplishment in the consumer 3D printer space.

I suppose you could print a car if you had a big enough printer that printed metal, but I think it’ll be a few years before we see anyone do that, and many years before it becomes common. We may not see even see it become common. Frankly I wouldn’t bet on it.”

Mings: “Do you have any industry specific slang that you use when talking about 3D printing or scanning?” 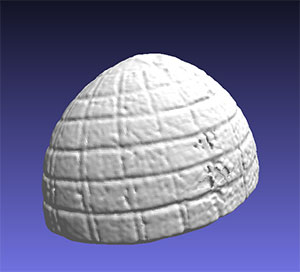 Matterform3DGuys: “Well, maybe not slang, but certainly lots of 3D terms like point cloud, meshing, line detection. Lots of math and programming terms – matrix multiplication, vectors, design patterns, algorithms. And of course, a fair sprinkling of swear words for which no one needs examples. ”

jimmcnugget: ”What’s the weirdest thing you guys have scanned at your office? Even if it was just as a test…”

Yes, they posted the scan of the ham.

Matterform3DGuys: “here it is! keep in mind it’s also one of the earliest scans we ever took with our scanner. We’ll scan whatever people want us to, providing it’s on hand. We are in a hotel while we attend CES. We do have a nice looking bagel.”

As a Reddit user myself, it’s always nice when people of interest open themselves up to the Reddit community and personally I’d like to thank Trevor Townsend and the rest of the Matterform guys for taking time out of what must have been quite a hectic CES2014 set-up to answer questions and scan bagels. Although, there were a few questions that were left needing answers.

Talking_Baby: “Would you rather scan 100 duck-sized horses or 1 horse-sized duck?”