Ahead of the Rapid 2013 event in Pittsburgh this week, Belgian-based 3D Printing pioneer Materialise sponsored and hosted the opening event at the Andy Warhol Museum, also in Pittsburgh, PA. Marking one of the first times that works by Andy Warhol have been reinterpreted by 3D Printing technologies, the event featured both “Factory 2.0”, a series of Warhol-inspired installations spread about the museum, as well as the five finalists of the “i.materialise Andy Warhol Contest”. The event was a resounding success, opened by Materialise’s CEO, Fried Van Craen, with hundreds of awestruck visitors seeing firsthand how 3D Printing is changing the way that art is conceived and made. 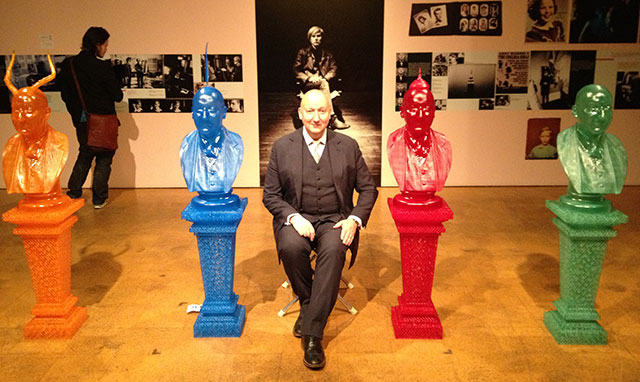 Organized by Materialise‟s on-line 3D Printing service i.materialise, the i.materialise Andy Warhol Contest challenged designers and artists worldwide to submit 3D printable designs inspired by the pop art movement. Also on display were the 3D printed works of the five finalists, chosen for their inventiveness and originality. The winner was announced by i.materialise and 1st prize went to “Tomato Paint Soup” by Emanuele Niri. The artwork was 3D printed using the accurate process and subsequently painted. Commenting on the winning entry, Curator and co-judge  Murray Moss said: “Warhol’s use of mass commercialization of food products as a subject for art has since his time, exploded, as this work metaphorically expresses; the potential power of a mass brand knows no boundaries and can no longer be ‘contained’.” 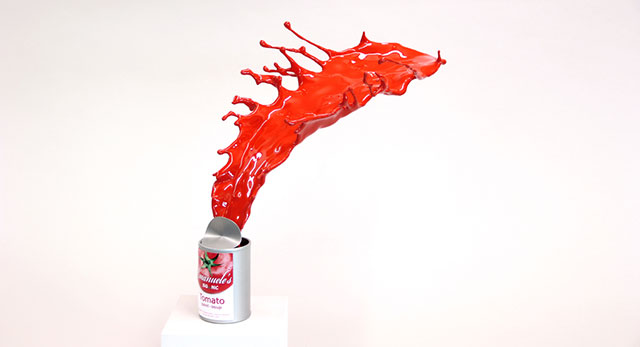 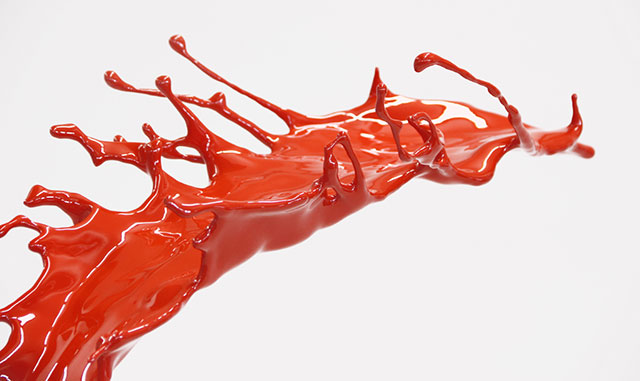 The other four finalist 3D printed pieces of art on display were:

“Speaking into the Microphone” candle holders by Luigi Vaghi 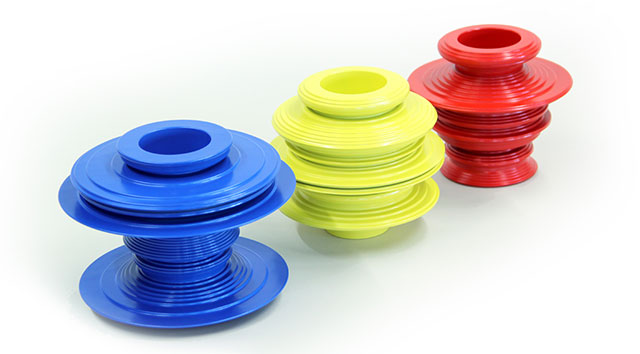 Comments by Curator Murray Moss: “The artist here creates a ‘continuous profile’ – this time, that of the infamous Andy Warhol. But in this case, registering the name ‘Andy Warhol’ with a microphone in a computer, a curve was created which was isolated and then used to generate the 3D printed model. Different people speaking the same two words, ‘Andy Warhol’, would create different curves, and therefore unique, one-of-a-kind ‘profiles’.” 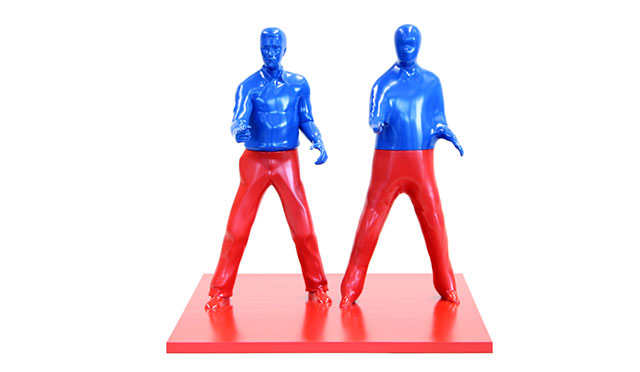 Comments by Curator Murray Moss:“Playing with Warhol’s obsession with fame, this work imposes a modern sensibility to this classic Pop Art icon, applying today’s fashionable ‘reductive’ approach to art and design and thereby stripping the figure of Elvis of his more recognizable and distinguishing features. This famous ‘Elvis’, rendered today, could represent anybody brandishing a gun (or in this case, a banana – a concession to today’s political correctness, even still in art).” 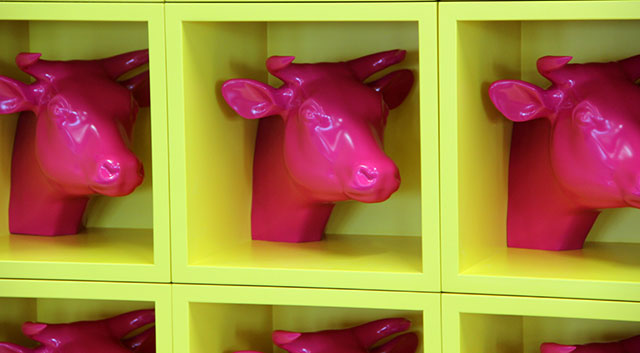 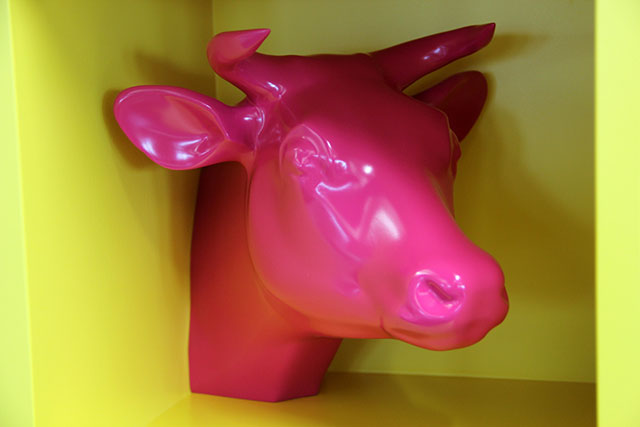 Comments by Curator Murray Moss: “In the words of the artist: ‘3D printing is something that Andy would have loved. In his factory years he mass produced artworks using his famous silkscreen technique. He tried to eliminate the artist’s ‘craftsmanship’ and ‘personality’ during the process. I can imagine Warhol’s Factory, today, packed with 3- D printers, printing his objects.”

“Trash Can” by Cathrien Orie 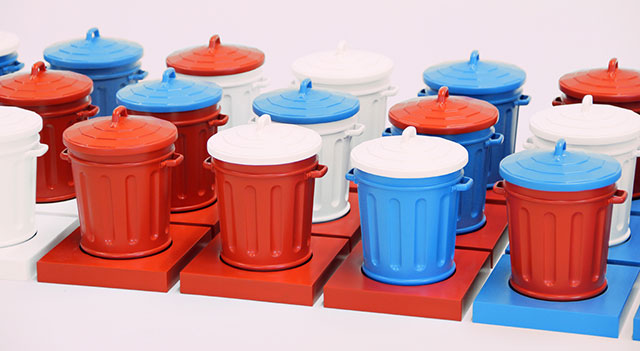 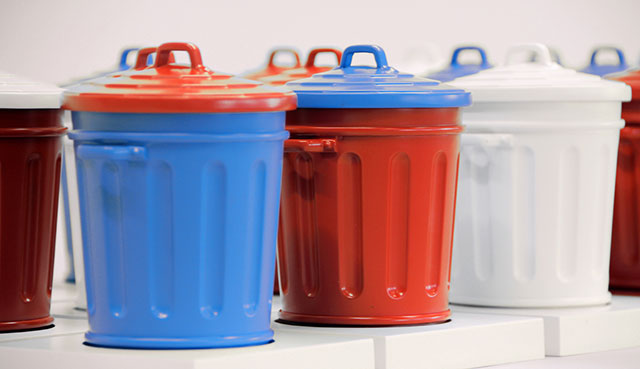 Comments by Curator Murray Moss: “This artist proposes that, like the Campbell soup can of 1962 or the Brillo Box of 1963, today’s most celebrated, ubiquitous, mass-produced consumer object might very well be the trash can, born of our waste and overproduction. Composed of 3 elemental shapes: the base, the can, and the lid. If one introduces the possibility of 3 colors in 3D printing this object, it becomes possible to make 27 ‘different’ yet ‘mass’ items.”

Congratulations to the winners from all at 3DPI — a riveting and inspiring design and 3D printing challenge all round.