At IIT in Mumbai, India, the country’s first 3D printed plastic robot MANAV, was featured on the third day of the country’s annual Tech Fest 2015.  MANAV, which means “human” or “man” in Hindi, is a creation of New Delhi’s A-SET Training & Research Institute. 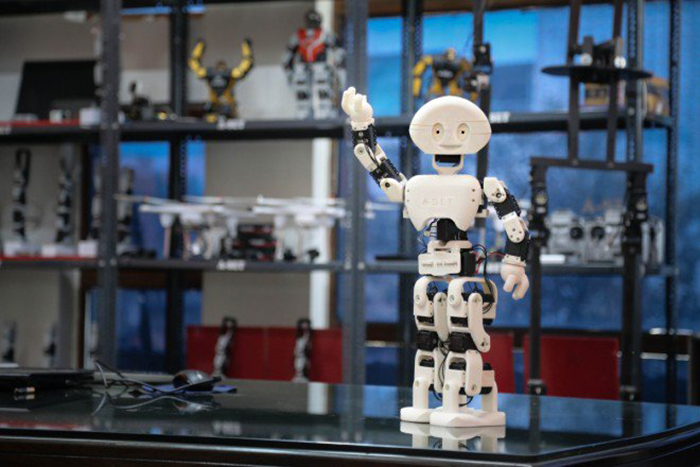 The 2-foot tall robot, with an entirely 3D printed body, weighs around 2kg and is powered by 21 servos.  Two cameras are fixed in his eye and his ears carry two microphones to detect and respond to the direction of sound stimuli.  Translating visual cues and aural commands allows MANAV wherein to supposedly execute a variety of animations and actions, such as playing football, exercising, and dancing.  Diwakar Vaish, the head of the Robotics & Research at A-SET Training & Research Institute in New Delhi programmed MANAV, said that it took two months to complete.

In the video, MANAV looks a bit like a chlid’s toy, doing some nice jerky dance moves to a nonplussed crowd. 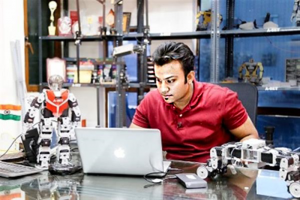 As a robotics platform for teaching, MANAV is perfect.  Most of the training courses available at the Institute are geared towards computer repair, but I could see them expanding into robotics using the MANAV robot as a teaching tool. If it’s not used as a teaching tool, there won’t really be that many people in India that could afford such an item, given the fact that India has about 20% of Earth’s most poverty stricken human beings.  Nevertheless, MANAV was a big hit at Techfest and, as one of the last projects to be featured, ensures that it will be remembered for the rest of the year.

It would be fun to have MANAV, Jimmy, Poppy, Darwin, and InMoov all get together and do the robot together.  Then of course, battle to the death.