In looking over the manufacturers of some small, consumer 3D printers, my wife, Danielle, and I came across many now defunct websites: startups excited to bring their machines to the market, but couldn’t keep pace with other firms and were washed away in the tide.  Makible is the latest company to suffer from the desktop 3D printing hangover.  Makible, in 2012, promised a $200 3D printer, the MakiBox, to make the technology more accessible, raking in a good deal of enthusiasm and investor dollars, but, soon there were delays and, by 2014, the company’s CEO, Jonathan Buford, had gone silent and Makible’s customers were enraged.

In July, Rachel wrote that one informant had let her know that “Makibox is now under investigation for fraud by Paypal, due to their continued pretense of building and shipping new orders within 6-10 weeks from time of order.” Another told her that an employee left the company after not being paid for months. There’s still no definitive word from Buford, but there may still be a silver lining for those who’d expected a MakiBox 3D printer. 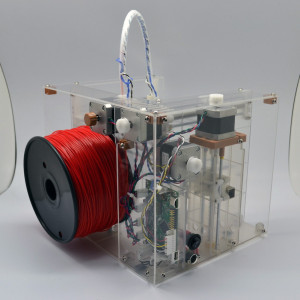 China European e-Commerce Limited has opened up a site called MakiBoxClearance, described on their homepage as “a Clearance site, the prices are low but the stock is limited and when it’s gone, it is gone forever.” This may represent 3D printing’s first “Everything Must Go” sale.  They write on their site:

[W]e were part of the group that provided warehousing and delivery services to Makible for the MakiBox products. When Makible collapsed owing us a seven figure sum for our services we ended up with the stock held in our warehouse to help pay off their debts – that is the stock that we are selling on this site. It is all brand new and unused, but it is ‘sold as seen’ and there is a limited amount available, when its gone its gone.

They add, in the same breath, “Makible was one of the most innovative companies in the 3D printer market selling a very high quality open source kit based on the proven REPRAP design with a few enhancements that you can use to make a brilliant 3D printer.”

The company is now in the process of getting rid of 450 units of Makibox 3D printer kits and 2,000 rolls of filament, not providing technical support.  So, while supplies last, you can purchase a MakiBox 3D printer kit, with one roll of filament included, for just £299 and some rolls of filament for pretty great prices: £12.99 for 1 kg and £9.99 for 500 g of ABS and PLA filament.  The site has all of the assembly and set-up videos needed to get the printer up and running, but, other than that, buy your crap and get the hell out.

0 0 0 0
More on this topicGrowing in Stature and Range: Sketchfab Launches a Download Option & Tips 200k 3D Files
More on this topicThe White House Celebrates the Holidays with an Instructables 3D Printing Contest