Embodying the philosophy of substance and openness for innovation and growth, Jennifer Lawton, President of MakerBot, a subsidiary of Stratasys, spoke about her life’s journey under “many hats” and how it prepared her for success and her current view on 3D printing technology. As a recent keynote speaker at the Women Technology Council’s Women in Tech awards in Salt Lake City she projected practicality over chic style and self-referential humor that compliments her business acumen and awareness of 3D printing’s myriad of possibilities. Lawton, like many others, views 3D printing as the next wave of industrial revolution and relishes her position at the forefront of movers and shakers within the industry. Her eclectic background from a nascent internet company to modern-family mother to a decade running bookstores as well as her spectrum of experiences as a woman in the corporate world have expanded her visions and allowed for a liberal acceptance of what is possible. The past journey and recent 3D printing news are not all rainbows and sunshine, but the potential is there and it sets the optimistic tone for Lawton and MakerBot. 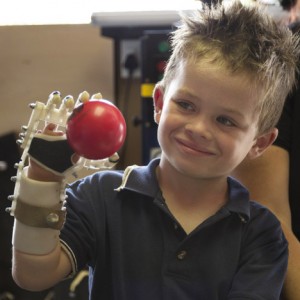 Stratasys acquired MakerBot for a reported $604 million in June 2013. The acquisition model is familiar to Lawton from a previous business venture and she explained the utility of the process: ”We were looking to be on track for an IPO and were actually in the fundraising process when the offer from Stratasys came up. It turned out to be a quick way to become public. As everyone knows, an IPO is a lot of work and pain. The acquisition route was quick and relatively painless. It presented a faster opportunity to take our message to the rest of the world.” As any surfer knows, you have to paddle fast and strong to catch the wave, reading it before it crowns with foam so that you can ride it instead of being tossed under the swell or miss the wave altogether. Reading the nature of 3D printing, MakerBot recognizes that the technology is not driven in a traditional business model, but as Lawton confirms, more akin to an ecosystem, ”turn chaos into something with a purpose.” The ecosystem model’s aptness blooms out of the use and innovation by the 3D printing industry. Even the industry itself finds new users and applications in fields transcending a typical technological form. It has become commonplace to hear of 3D printed models in medicine, sculpture, engineering and fashion as well as hybrids of these and other fields. That is what makes 3D printing an ecosystem, it harbors these already established domains and fosters growth and innovation within them and connecting them. The vision and leadership of Lawton promises to establish MakerBot as standard in the industry.

As mentioned before, critics have cropped up with one source citing Dr. Oz warning users of potential toxic effects due to proximity and exposure to 3D printing. I am a hobbyist painter, and the oil paints I use have toxic potential as well, but common sense can prevail and using a ventilated space alleviates any slight chemical dispersion. It is a silly concern. The real obstacles are ones like those faced by Lawton as she culled her business models and proficiency. In many ways the corporate world is still an old-boy’s club with cobb-webbed paradigms and glass ceilings for innovative minds such as Lawton’s. Her anecdotes of male coworkers’ daily harrassment are examples of idiotic mindsets still prevalent in the business, yet she has transcended such feeble people and will continue to leave her imprint on a growing industry. Already a $2 billion market, there are predictions that within the next five years it could exceed $6 billion. Some analysts believe there needs to be a wider accessibility to 3D printing bluring the distinction between professional use and hobbyist. MakerBot plans to be part of that process. As Lawton says, ”At MakerBot we want to change the world. We’re leading the next industrial revolution, and there’s a lot of work left to be done.”