The Dutch are known for innovation, having brought us windmills, the legalization of drugs, Van Gogh and tulips (see how much I know about the Netherlands?). In all sincerity, the Dutch have invented a lot of things that make the modern world what it is, from Wi-Fi to compound microscopes and even the stock market. They’re also up there in the European pack when it comes to 3D printing. So, for LUXeXcel to win awards for Dutch innovation, it must really say something about their technology. 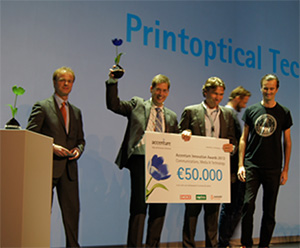 We’ve covered LUXeXcel before for their 3D printed optics. Though the company is known mostly for additively manufacturing the lens components for LED lights, they’ve branched out at times into 3D printed eyewear and have plans to use their 3D printed lenses for other applications. Because of its distinct Printoptical process, the company won the Dutch Accenture Innovation Award for Best New Technology and the Most Innovative Dutch Technology of 2013, with the chairperson of the judges’ panel saying: “the jury was convinced that LUXeXceL’s Printoptical Technology has an enormous potential to disrupt many different markets and products and can create a digital manufacturing revolution in the optical space.”

These aren’t the first awards that the company has received. In addition to the 2012 Enabling Technology Award from Frost & Sullivan, previously covered by 3DPI, LUXeXcel has been honored with the Gazellen Award 2012, the Rapid Pro 3D Printing Award 2013, the Deloitte Fast-50 ‘Most-Disruptive Innovator Award 2013’.