In the Loving Arms of WREX, Hannah’s 3D Printed Exoskeleton

Only a few years ago, the simple act of feeding herself or hugging her mother would have eluded a child born like Hannah. But in the age of 3D printing one little girl has discovered that anything is possible. Hannah was born with a condition called arthrogryposis, a disorder characterized by severe joint and muscle weakness, and she has had little to no ability to move or interact with the world around her without help.

Five months into her pregnancy, doctors informed Hannah’s mother, Jennifer Mohn, that the future would be a difficult one. “They told us to make arrangements for her,” said Jennifer grimly. Thankfully, Hannah survived, but with several serious health conditions.

“She was just really unable to move,” Jennifer said.

But, four years later, she’s found herself able to interact with her world, thanks to the Wilmington Robotic Exoskeleton, or WREX for short. Developed by Senior Research Engineer at duPont Hospital for Children, Tariq Rahman, each WREX is constructed of lightweight plastic and rubber bands and can be custom made overnight using the latest 3D printing technology.

“If you do the geometry right and you put the bands in the correct place, you can get this floating sensation for a kid,” said Rahman. 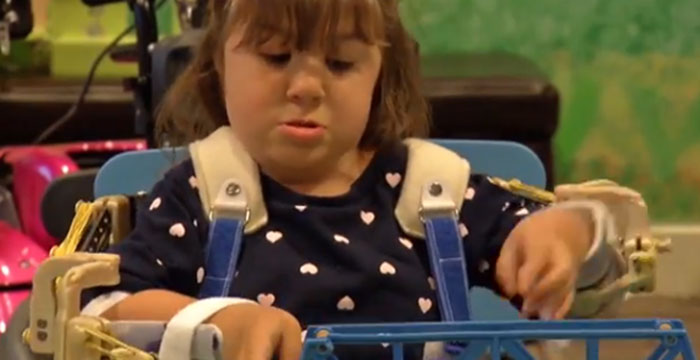 If WREX looks familiar, that’s because it made headlines in 2012 when it helped another little girl born with arthrogryposis, named Emma, to overcome similar difficulties.  As in Emma’s case, the exoskeleton will be able to be updated and reprinted with Hannah’s growth, a huge benefit of the ease and affordability of 3D printed medical devices.

3D printed limbs andprostheses are only some of the many uses for 3D printing technology in the medical field, and because it can be done with current technology it is easily the most exciting. Printing new organs will be a revolutionary advancement, but it is an advancement that is, unfortunately, many years into the future. But we don’t have to dream of a future where everyone missing a limb or born differently abled would have access to devices that make their lives easier. 3D printing is already making it happen.

“To see her have the ability to reach her arms out, to reach out and grab something is just a really amazing feeling for a mom,” Jennifer explained.

It’s pretty amazing feeling for us too, Jennifer.