Since the technology first hit the scene some thirty years ago, the media has been making wild predictions about 3D printing’s capabilities. At CES in January, industry analyst Todd Grimm relayed a story in which, in the 80s, Good Morning America predicted that, in just five more years, auto manufacturers would be 3D printing entire car doors. Grimm remains skeptical about the technology’s progress, but, to a naive optimist like me, it seems that the hype is starting to catch up with reality. Perhaps its pure enthusiasm and a thirst for media headlines that’s driving such endeavors, but Local Motors’ 3D printed car has been making significant strides to demonstrate that 3D printing is almost ready to fulfill those wild predictions. 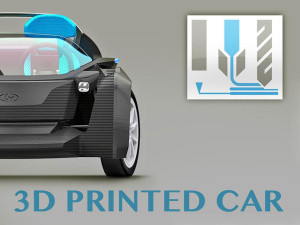 Local Motors first made itself known with its open-source, crowd-source model of auto design when it was founded in 2007. After successfully constructing and selling its flagship Rally Fighter vehicle, the company has gone onto a number of projects, including an open source motorbike and an all terrain auto for DARPA. Most recently, the company made even more headlines by announcing that it would 3D print the majority of a car’s body. Local Motors explains in its project brief:

Currently, producing a new car from a new design represents either a significant investment in tooling, or a large commitment in time for someone to produce a design free form if the tooling does not exist. In addition the need for all that production tooling is the result of just how many parts are required to produce the structure of a car… Imagine if you could create the major elements of the exterior, the structure, and the Interior associated with a vehicle in one part. Then think if changing the design, or even taking on an entirely new one represented no additional cost in tooling. This is what we want investigated in the Direct Digital Manufacturing [DDM] Project!

Since the initial announcement of the project, the open source auto company has been working with the federally funded Oak Ridge National Laboratory (ORNL) in Tennessee to make significant progress in the R&D stages of their design.

ORNL, with Cincinnati Incorporated, has developed a large scale hybrid 3D printing and machining device that extrudes the build material layer by layer and subsequently machines the printed parts with a router to more precisely meet design specifications. In some ways, the equipment resembles a 7’ x 7’ x 6’ MakerBot except, instead of a spool of plastic filament, the machine has a hopper filled with a composite material – part ABS (the plastic that Legos are made of) and part carbon fiber for structural reinforcement. Not long ago, the team installed a moving, heated build plate onto ORNL’s device, making it even more like an ordinary desktop 3D printer. This z-table both prevents the printed material from cooling and contracting and also moves up and down to double the printing height. 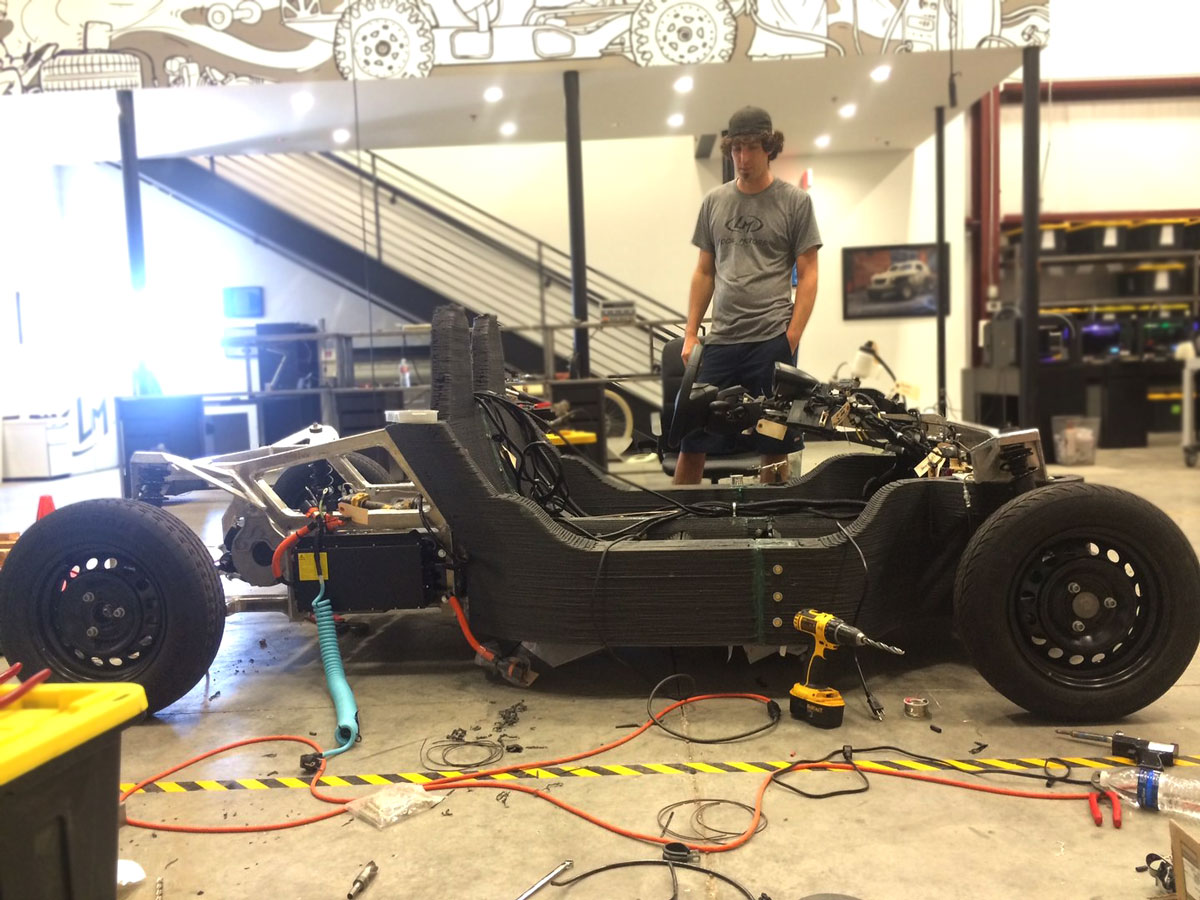 So far, Local Motors and ORNL have printed some pretty large and stunning parts for their DDM project. After fabricating a number of scale models for their two-seater, they ultimately made a full-scale print of the car’s tub, or chassis. The chassis was fixed to all of the essential hardware – shocks, motor, steering wheel, axles, wheels, etc. — to give the team a test mule so they could determine the viability of their print. In the video below, you can watch members of the Local Motors team taking it for its very first spin.

Now that they’ve effectively demonstrated their concept, the team is hard at work to 3D print the car’s external structure. The car’s design, like all of their vehicles, was derived from the crowd. As part of a contest, members of the Local Motors community submitted their own models for the DDM project and voted to select whose auto would make it to the final round of industry judges. First, second, and third place winners were then selected by a panel of experts, like MakerBot CEO and Local Motors’ Board member Bre Pettis, as well as members of The Association For Manufacturing Technology. Among the 206 entries, the judges ultimately chose Strati, a sleek, futuristic vehicle conceived by community member Harlock, who was awarded $5,000 and a trip to the International Manufacturing Technology Show in Chicago, where the car will be 3D printed live this September. 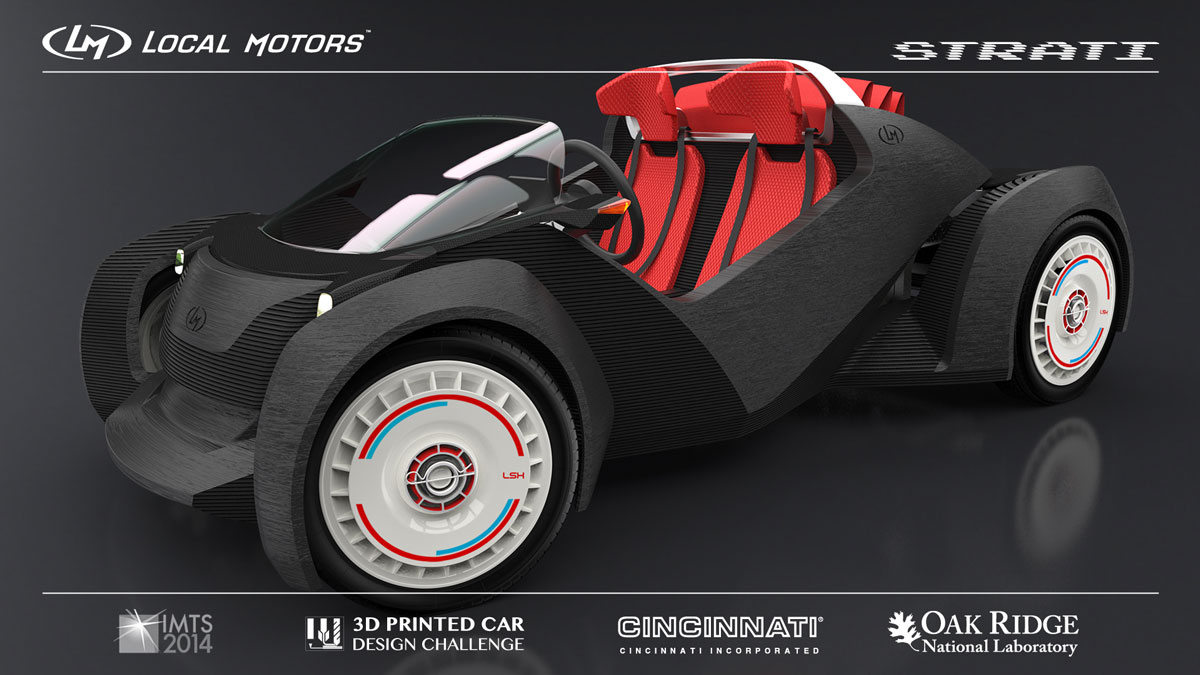 While the team modifies the Strati design for the real world, Local Motors and ORNL have already begun 3D printing large external parts of the car’s body. Their latest print is a wheel well of the DDM Strati and, from the looks of it, the body of the vehicle is going to turn out pretty well. We’ll know for sure when it makes it to the IMTS this fall, but, even as it stands Local Motors’ 3D printed car represents the overall maturity that the 3D printing industry has developed since that Good Morning America Show aired in the 80’s.

As impressive as the project is, the Strati, when finished, won’t be the first 3D printed car ever made. The first car with a body made almost entirely from 3D printed components was the Urbee. A few years back, engineer Jim Kor designed a hybrid electric vehicle, using 3D printing to develop his first prototype. And, as Kor explores moving the car into full production, he is even planning on 3D printing the end model, as well. In addition to the Urbee, German company EDAG has 3D printed individual parts for their own futuristic concept car, assembling the car’s body for the Geneva Motor Show this past March. So, even as unique as the Local Motors project is, it’s only a piece of the puzzle.

Though Local Motors will be the first company to 3D print an entire car on an enormous hybrid machine, live in front of an audience, their massive endeavor is part of a larger picture. 3D printing still has a long way to go to 3D print all the cars we drive and even to create high-performance metal components that make up a given car’s engine, but it is also a long way from the technology it was when it was invented.

Relegated to design and engineering labs, the technology was first developed as a means of prototyping objects before moving into the final production stages of an item. Today, it’s slowly becoming a part of every day lives, and moving near every home, with ordinary users creating artwork, gadgets, and household items on a regular basis. 3D printing is now used to mass manufacture custom hearing aids, with 10,000,000 such devices in circulation today. GE will be devoting an entire facility to 3D printing jet engine parts, albeit a single part produced en masse. Just this year, more than three different stories have emerged about companies or individuals 3D printing complete homes, including one Chinese company that made 10 in one day. And Local Motors will be 3D printing a car, live in front of an audience at the International Manufacturing Technology Show in Chicago.

3D printing is here to stay — and the journey continues…..