Adobe has just introduced its latest version of Photoshop CC for its Creative Cloud subscribers, with a host of new features, which, most notably for 3DPI readers, is that version 14.2 includes support for 3D printing.

The new version reportedly enables users to design new 3D models directly in Photoshop or to import existing models from other 3D software with further capabilities to edit, refine, preview and then 3D print them directly from within Photoshop CC.

The premise is that this is an accessible and enabling feature within a familiar environment for 3D designers and creatives that may not otherwise engage with 3D printing or who have struggled to do so to date. According to Stephen Nielson, Photoshop’s Product Manager, for many “it can be a challenge to get started.” This latest version of Photoshop CC is designed to simplify and support the generation of 3D printable models and remove the complexity of the process, including as it does automatic mesh repair, and automatic generation of support structures. This is indeed a move towards 3D printing accessibility for a ubiquitous software platform, to be welcomed IMO, but Adobe might struggle to live up to the marketing spiel of ensuring “a successful print every time,” — a tad naïve, I thought.

And while Adobe says that: “Photoshop CC supports the most popular desktop 3D printers,” this would suggest it may not be compatible with all of them. However, they are not just targeting 3D printer owners, Adobe has partnered with Shapeways for non-3D printer owners, who can access the 3D printing service directly from the software platform, which supports the full range of high quality materials available including ceramics, metals and full colour sandstone.

A beta user of the 3D printing capabilities in Photoshop CC V14.2 is Paul Liaw, who works as a character sculptor in New York, but designs 3D printed jewellery as a hobby. This series of cuff bracelets are an example of his work. 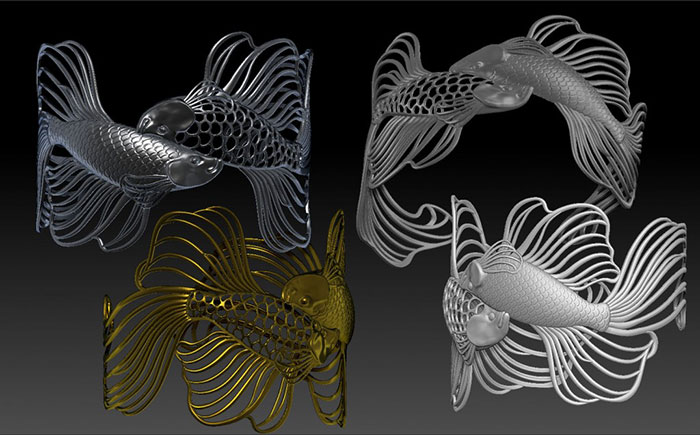 Of the new Photoshop development, he says: “My design process is so much easier with the new 3D printing support options in Photoshop CC. I can make my jewellery designs look beautiful and automate the process of using the least amount of material without going under the printable threshold – this back and forth used to take about 80% of my time!”

Indeed, it was the difficulties involved in getting a digital model “print-ready” that have inspired this development. Adobe’s Cari Gushiken reports on the company’s blog that team members Pete Falco (Lead Scientist) and Zorana Gee (Sr. Product Manager) initiated a fact-finding trip to the UK just over a year ago to meet with universities, high schools and design agencies that were engaging and experimenting with 3D printing. And the feedback was that “the number one challenge they all faced was how staggeringly difficult it was to successfully prepare and print an object.”

It was “that trip to the UK [that] inspired the team to create a solution that would require simply hitting the ‘Print’ button in Photoshop, automating what used to take days of work. The team wanted to ensure that they also preserved the color and texture of the 3D designs – elements that most manufacturing focused software didn’t account for.”

As I said, this is a welcome move by Adobe — and will bring new accessibility for ‘Creatives’, however, for the vast majority of people, me included, Photoshop is not that accessible itself.

A video introduction to the software is given in the video below: