There are a few different ways to go about 3D printing organs. One, possibly the simplest, is to 3D print a scaffold using a biocompatible material and then grow the tissue cells on it. This approach works on monocellular tissues such as cartilage and, although making it actually function within the body is not as easy as it sounds, it was accomplished by Columbia University Medical Center (CUMC) researchers with meniscal tissues, responsible for the shock absorption in your knees.

Torn meniscuses are extremely common and there is not much surgeons can currently do to repair them beyond removing the tissue to alleviate pain from swelling and irritation. This leaves the knee without a natural shock absorber, thus increasing the risk of arthritis. The new method, devised by study leader Jeremy Mao, DDS, PhD, at the Edwin S. Robinson Professor of Dentistry (in Orthopedic Surgery) at the Medical Center, and his team, uses a 3D printed scaffold and a highly accurate system for protein dispensing in order to stimulate tissue re-growth. 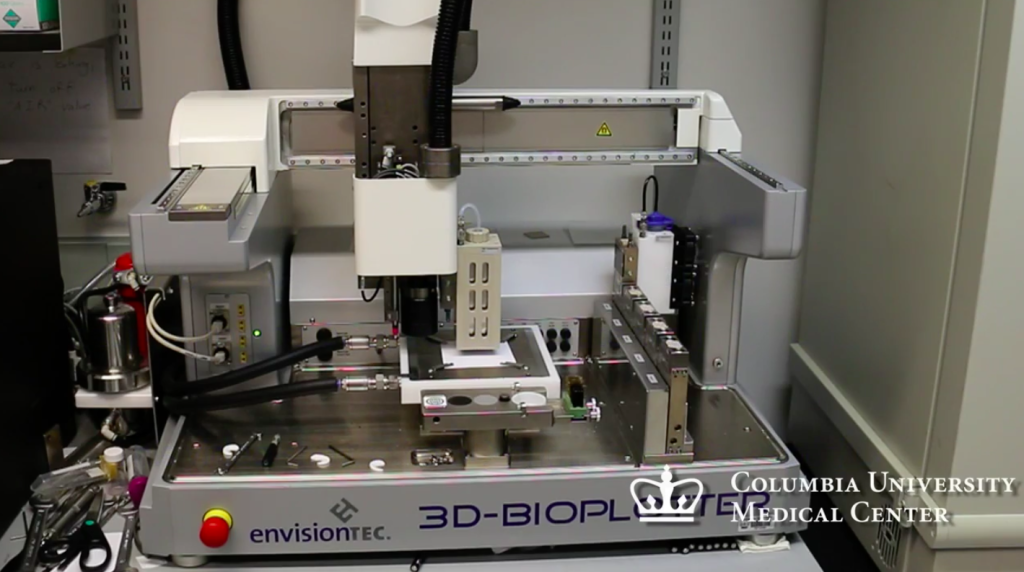 “We envision that personalized meniscus scaffolds, from initial MRI to 3D printing, could be completed within days,” said Dr. Mao. The personalized scaffolds would then be shipped to clinics and hospitals within a week, to be surgically implanted in the patient’s knee.  Mao explains further in the video below:

To put Mao’s explanation another way: an MRI scan of the intact meniscus in the undamaged knee would be converted into a 3D image. The data is then used to 3D bioprint a scaffold in the exact shape of the meniscus using a polycaprolactone material, a biodegradable polymer. The machine used for the bioprinting process is EnvisionTEC’s bioplotter, which is capable of 3D printing with different materials at different temperatures. The process implemented in this case is very similar to desktop FFF 3D printing, only at a microscopic level.

3D printing the scaffold, is, almost paradoxically, the easiest part. To induce the body’s existing stem cells to form new meniscal tissue encompassing the scaffold, the scientists found that they needed to apply two recombinant human proteins: connective growth factor (CTGF) and transforming growth factor β3 (TGFβ3). These had to be released in specific areas and in a specific order. To do so the proteins were encapsulated into two types of “slow-dissolving microspheres”, which were to be released in the outer and inner meniscus, respectively, after the scaffold is implanted.

Dr Mao’s work and theory on applying this process to humans is the result of a previous experiment successfully carried out in sheep and published under the title “Protein-Releasing Polymeric Scaffolds Induce Fibrochondrocytic Differentiation of Endogenous Cells for Knee Meniscus Regeneration in Sheep.”

He and his team, which also includes contributors Chang H. Lee, Chuanyong Lu, and Cevat Erisken (CUMC), Scott Rodeo of the Hospital for Special Surgery and Lisa Fortier (Cornell University), believe this approach also represents a departure from classic tissue engineering, one where the stem cell regeneration process is “jumpstarted” inside the body, using factors that, by leveraging on the accurate depposition possible through the 3D printed scaffolding, promote tissue regeneration, thus helping the body to carry out the same additive process by which we all come to be and grow in the first place.