Saving time is an important factor for most people. Even if it doesn’t always correlate with money as is sometimes thought, the ever more hectic lifestyles – which is almost pathologically pursued – forces new solutions and innovations to hit the market in order to help accomplish a +24h day with an appointment/assignment filled calendar to accompany the unread email queue. However, the efficiency angle might not suit everybody, even if they were after fundamentally the same thing. For me, at least, convenience would be one example of a value closer to my heart. 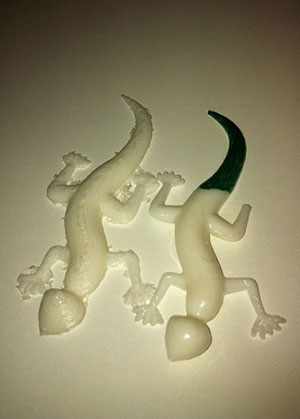 Laziness, located at the other end of the convenience spectrum, is sometimes seen to carry a certain a (often undeserved) negative weight, even though it could also be seen as one of the keys when creating technological or other solutions that have the actual potential to improve lives – or some small parts of it at least. From this field of convenient solutions comes today’s project, the 3D print finisher from Keith Nielsen, a 23 year old from Chicago.

What Keith has created is an acetone vapor chamber, which eliminates the manual post-3D printing object smoothening – regarding the acetone treatment of ABS objects at least. The machine uses a heated pan, where the layer of acetone is placed. The frame is leak proof, which both enhances the process but also saves your lungs. The other benefit from using such a machine is the basic premise of being able to 3D print objects with a lower resolution –  significantly faster – but still ending up with a reasonable result. Based on all this – and the $175 crowfunding price for an assembled machine – I would have assumed that this project had the potential to hit the actual production phase with ease, but not everything went as smooth as might have been expected.

The 3D print finisher was on Indiegogo, but didn’t reach its initial goal of $5,000, ending up at $2,876. However, despite this funding round falling a bit short from the $5k goal, I’m assuming that this is not the last we’ll hear from Keith Nielsen and the 3D print finisher.