Researchers at Harvard University have come up with an exciting new method of 3D printing that effectively allows them to produce complex shapes in mid-air with no supporting structure.

Laser assisted direct ink writing really could be the next generation of printer and it could change the industry, at the top end at least. The findings were published in the Proceedings of the National Academy of Sciences (PNAS) journal and they make for interesting reading.

Support acts can be a drag

3D printing is still in its infancy and we’re all constantly working to expand the limitations of our knowledge, as much as the materials. One conundrum that we’ve only beaten in theory until now is the problem of creating complex structures without a series of supports, struts and complementary pieces that have to be removed after the event.

The layer by layer printing mechanism means extended overhangs simply sag or break before the printer has a chance to put down reinforcements.

That’s especially true with metallic structures, which take longer to produce and cure. Without resorting to selective laser sintering, which comes with its own issues in terms of cost, resolution and consistency of the finished product, we simply had to accept that intricate patterns needed a support mechanism.

A quick cure could be the answer

Now the researchers at the iconic university, led by Jennifer Lewis and Mark Skylar-Scott, have found a system of printing and curing the ink so quickly that we can effectively print in mid-air. It proved the theory by creating an intricate and delicate butterfly.

The secret lies with an advanced silver nanoparticle ink and the laser that is synchronised with the head. Effectively the ink is printed and annealed almost simultaneously thanks to an infrared laser that is focused precisely on a 100-micrometer spot.

That spot is right next to the emerging filament so it forms a wire as soon as it hits the environment, but not so close as it heats the nanoparticles until they emerge.

This meant the team at Harvard could produce the intricate butterfly and that the metal filament could have all kinds of applications where time and precision are of the essence.

It’s a great step forward scientifically and it is also mesmerising viewing:

It costs less to print this way

This new method of annealing the silver nanoparticle filament comes with other benefits. The research team did away with expensive conductive substrates and replaced them with a simple plastic substrate that is readily available and much cheaper.

Now the butterfly is an ornate example of the process in action, but wireframe ornaments are not the end goal. This technique can be used to create precise metallic connections, springs and almost any spiral structure. That could take antenna technology to a whole new level. 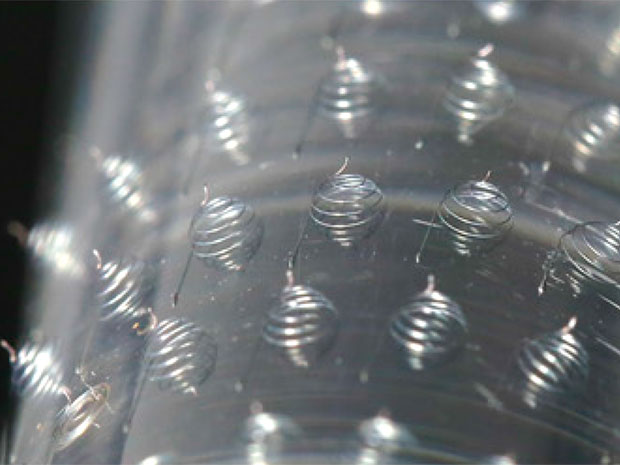 A quick route to clearer communication

The end result could be better phone reception for the general public and a whole wave of improvements behind the scenes. This could even be the spur for a new range of communications services that we haven’t even considered as yet.

Now the team will try and make this process work with different elements and compounds, specifically ceramic and other semi-conductor materials that could afford a performance advantage.

There is almost certainly going to be a trickle-down with this tech, too. The simple fact is that the sooner you can cure the filament, whether you’re making advanced metallic parts for a mobile phone or a PLA model in your home, the better the finished product will be.

So one day soon we might have instant cure modelling in the comfort of our own home. Clumsy support structures, too, could go the way of the Dodo.

None of us will miss them.