There was so much happening at today’s Inside 3D Printing Santa Clara event that it’s still a little overwhelming trying to parse it down into a single column. I could probably write a novella if I had enough time. With a day that was packed with fantastic workshops, dozens of speakers and an exhibit hall full of some of the industry’s coolest companies, most of the day I felt like I was re-enacting Sophie’s Choice.

I’ve already told you about Autodesk SVP Jeff Kowalski’s epic mic drop during his opening keynote, but throughout the day I heard quite a bit of chatter on the subject. Mostly people were saying that it was a great speech, and a few were impressed with Spark and Ember, and a couple people told me that they were impressed with the size of Kowalski’s, uhm, extruders. They may have used a different term. I didn’t hear a lot of negative reactions, although I admit that those who didn’t agree may have been unwilling to say something negative to a member of the press. But overall, it seems like the speech – and Spark – made the impression that Kowalski and Autodesk were hoping it would.

While the keynote, Spark and Ember took up a lot of the day’s news, there was another pretty big announcement from Formlabs. Today they showed off the two new materials for their stereolithography printers the Form 1 and the Form 1+. The new Functional Materials offer Form 1+ owners the ability to print castable resin parts for use with investment casting that will burn away completely clean, and the ability to create soft parts with the new flexible resin. As the resolution for FDM 3D printers begins to near its limits, light-cured resin 3D printers are starting to finally get more attention, and one of the things holding them back was their lack of material versatility, until now, it seems. 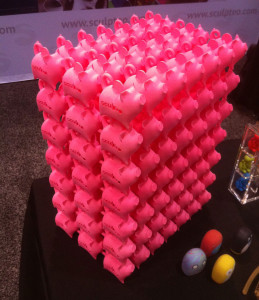 I also met up with Artec’s Leonid Volkov who showed off their new Shapify Full Body 3D Scanning Booth, which was to put it simply, extremely cool. Volkov – who was kind enough to reschedule after my videographer was called away from our first appointment – walked me through the process and had his team scan me. I’ve stood for a 3D scanning session before, and while it only takes 3-5 minutes, standing still that long is a nightmare. The Shapify booth uses four individual scanners on a rotating track and fully scanned me in twelve seconds. Yes, seconds. Then the Shapify software created a fully watertight and 3D printable model in under four minutes right in front of my eyes. My least favourite 3D printing industry adjective in the world is “disruptive” but honestly it kind of fits in this case.

3D printing service company Sculpteo was on hand, showing off examples of the stupidly long list of materials that they can print in. The Parisian company recently opened a business office in San Francisco, and while everyone I spoke to was pretty tight-lipped on the subject I’ve heard rumblings that they are considering opening up a printer farm stateside. They also had a giant pig brick on display. It’s intended to show how many of a single object that they can cram into a single SLS printer bed, which is a lot, but it was also a little disappointing. Only because I would love to have giant blocks of pink pigs sitting around my house. I considered trying to swipe the pigs while no one was looking, but I figured it would look a little conspicuous shoved under my shirt.

Right across from the 3DPI booth was the Tethon3D booth, where they were showing off their pretty amazing ceramic 3D printing materials. I ran into Andy & Whitney – or rather they ran into me – from the great 3D printing podcast 3D Printing Today, which you should all be listening to on your way to work. I also was approached by Kartik Gada who wanted to talk to me about his charitable project The Uplift Prize. It has zero overhead and awards every cent raised to the contestant who presents inventions that can actively help them tackle the persistent problem of poverty in developing nations.

I missed so many people, and really only managed to cover about 3/4 of the exhibit hall so I’m really hoping that I can catch up with everyone tomorrow that I missed. Once again I spent the day live tweeting the show and shared a lot of great pictures and bits of news, and I will continue to do so for Thursday. If there is anyone who you think I should go visit and talk to go ahead and tweet me @SJGrunewald and I’ll do my best! And of course, if you’re at the show Twitter is the best way to get my attention. Until tomorrow!