Inside 3D Printing NYC: Turning Up the Volume Printing with Voodoo Manufacturing

Starting off as a few fresh-out-of-college software innovators who were acquired by MakerBot just a couple of years ago, Voodoo Manufacturing is now an exciting up-and-coming 3D printing service provider in the United States. Based in my hometown of Brooklyn, New York, Voodoo Manufacturing has been on the 3D printing scene for just under a year now, and when we covered them back in October 2015, the startup was already working with major companies, such as Local Motors and Intel. I decided that, since Voodoo Manufacturing was just a couple of subway stops away from me, and would also be participating in Inside 3D Printing this coming week, it was about time I visit to see their MakerBot-driven Bot Farm in action. I sat down with Voodoo Manufacturing’s co-founder and CPO, Jonathan Schwartz, to talk about Inside 3D Printing, the roots of their Brooklyn-based startup, and the real value behind even the simplest of PLA prints.

When I entered Voodoo Manufacturing, I was quite taken aback by the farm of Replicator 2s, most of which were all operating close to unison. The factory also contained a handful of Replicator Z18 printers and,all around the space were projects and prints from Voodoo’s brief, yet fruitful history in the 3D printing industry. Overall, Schwartz estimated that Voodoo has about 150 3D printers under their belt, making for a wholesome Bot Farm right in their Brooklyn workshop. Before starting Voodoo Manufacturing last year, Schwartz had collaborated with Voodoo Manufacturing’s CEO Max Friefeld and fellow co-founder Oliver Ortlieb while attending Harvey Mudd College. Together they had created Layer by Layer, one of the first truly accessible 3D printing marketplaces around. Eventually, the Layer by Layer team was acquired by MakerBot, where they worked on a number of projects, one of which was engineering a software to control a group of 3D printers.

“That got used for what MakerBot was selling as the ‘Innovation Center’, so groups of 30 to 100 printers, mainly for schools, could be put in a room to give students direct access to the machines,” Schwartz told me. “The software rebuilding was transformed into something that was accessible for students. Meanwhile, we realized we could actually use this to go and run a Bot Farm, so we started coming up with the idea of spinning this business out and making this a real thing. That was the genesis of Voodoo Manufacturing.” 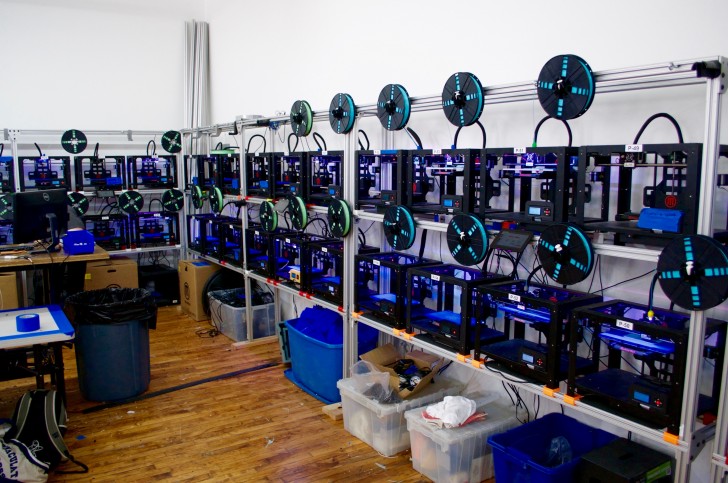 In May 2015, Schwartz, Friefeld, and Ortlieb joined with Patrick Deem (ex-project manager of MakerBot), branching out of MakerBot and into Voodoo Manufacturing, which has been an increasingly successful operation ever since. There are a couple of  primary services that Voodoo provides, primarily Volume Printing and Direct Print. Volume Printing allows companies and the like to produce a massive amount of customized prints, while Direct Print allows consumers to upload a 3D model for smaller batch printing. And although some may say that the novelty of FDM printing is wearing off, Schwartz claims there is more value to these prints than meets the eye. 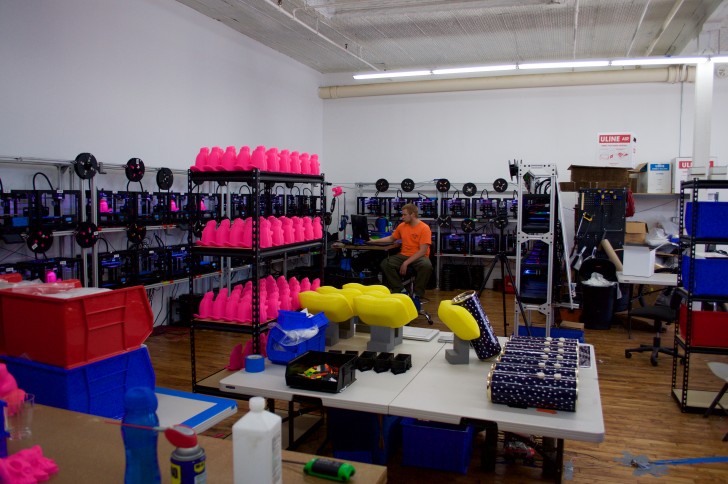 “The best representation of what we do is really just our projects, that’s where our value is. It has nothing to do with the fact they’re 3D printed. These products hold value on their own, and in their own shapes and functions. Some of our customers saw there being value in the fact that these things were printed, but, for the most part, it’s just the fact that they’re able to have these unique objects. It’s really all about it being easy, fast, and relatively inexpensive to get any part imaginable made.”

Although they do offer both Direct Print and and larger-scale Volume Print services, overall, Voodoo considers themselves as a sort of bridge manufacturing plant, focusing on generally small production runs ranging from 1 to 10,000 prints. Voodoo Manufacturing hasn’t been around long, but they’ve gained a majority of their popularity and business through word-of-mouth and referrals from satisfied customers. Schwartz explained that, sometimes, customers just come for a single prototype through the Direct Print service, but many end up sticking around for large-scale production later on. 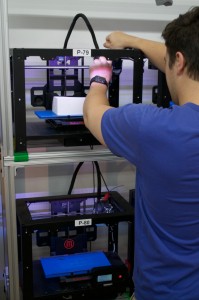 “We’ve actually seen a fairly high conversion rate between our Direct Print customers and our Volume Print customers. About 10% of our customers are coming in and printing a single item or prototype and then they realize, now that they can scale this up, we might be the best option for them. It’s going to save the most money; it’s the fastest; it requires the least effort. The correlating factor is that these are all relatively small batch production runs, which means somewhere between 1 and 10,000 units. They’re all objects that have never really been made before, and are unique in the shape, function, and application.”

One company Voodoo Manufacturing has worked closely with is Autodesk. In fact, their first volume printing order was put in by Autodesk and Porsche, who asked Voodoo to print a few thousand miniature McLaren models for an event they had partnered for. Since then, the startup has worked with a number of different entities, providing their Volume Printing services to Verizon, Chipotle, Intel, and others. They’ve also come to the aid of other 3D printing companies too, such as the NYC-based electronics printing company, BotFactory.

“We manufactured seven parts that go on BotFactory’s machines. We do a handful of structural components, like brackets, enclosures, etc. We obviously use MakerBot Replicator 2s, so these are components made of PLA. You’re not going to make an airplane bracket or do something going under intense thermal stress. We understand that, and our customers understand that, but there’s still a large world of things that this can be used for. For BotFactory’s printer, there are a number of brackets and enclosures that 3D printing was a viable option for. There’s no need for them to buy their own printers and run them out of their own office, so it was an easy transition for us to go and start producing those parts. We could do it in a scaleable way so that, when they came to us and needed a thousand parts quickly and we were able to produce that, they’ve come back to us a handful of times to make parts.” 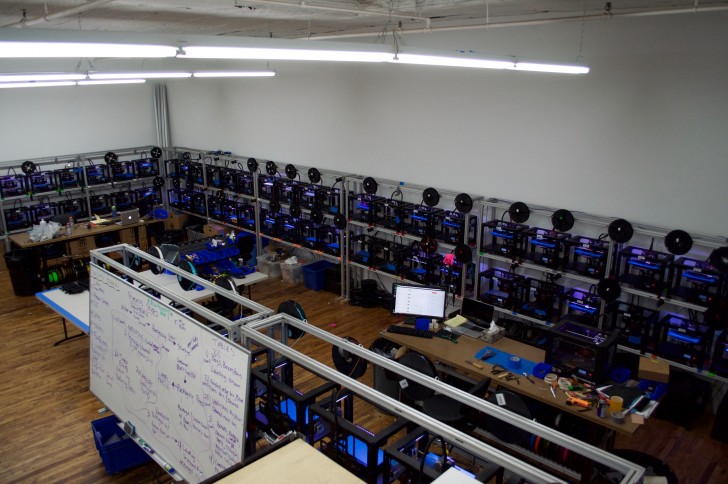 Schwartz will be present and speaking this coming Monday at Inside 3D Printing in New York, discussing high-volume 3D printing. Schwartz gave me a brief overview of what he plans to cover at the conference.

“At Inside 3D Printing, I’ll be giving an overview of Voodoo Manufacturing, the idea of high volume 3D printing, and what it’s going to enable. As I was saying, that 1-10,000 unit range, there are some traits we’re noticing: customization adds value, fast turn around times add value, too. Whether you’re a marketing person for a company or you’re building a new hardware product, you can use it differently, and it will mean something different to you. For the marketing person, they can now create unique things that will resonate with their target fan base; for the hardware company, they can produce in a scalable way, too.”

If you’ll be at the NYC event as well, you can catch Jonathan Schwartz on April 11 at 3:30 PM (EST), speaking at the Manufacturing Track on the subject of “High-Volume 3D Printing”. Voodoo Manufacturing will also be competing in the Inside 3D Printing “Frontier Tech Startup Showdown”, which is taking place April 12 at 11:45AM. Asimov Ventures will be offering a $15,000 Uncapped SAFE to the eight startups, which aside from Voodoo, includes 3D Matter, Applied Motion, Arevo, Cellink, Dog Parker, Jodone, and VRVU.