Inside 3D Printing Heads to Berlin for Round 2

Inside 3D Printing is now running for the second time in Berlin and the two-day conference and expo started strongly with over a thousand people registering and with a full house for the first keynote by Terry Wohlers from Wohlers Associates.  The scene is set for a very successful two days of three tracks of speakers with a great lineup of the industry’s top experts sharing their views of  current and future developments. 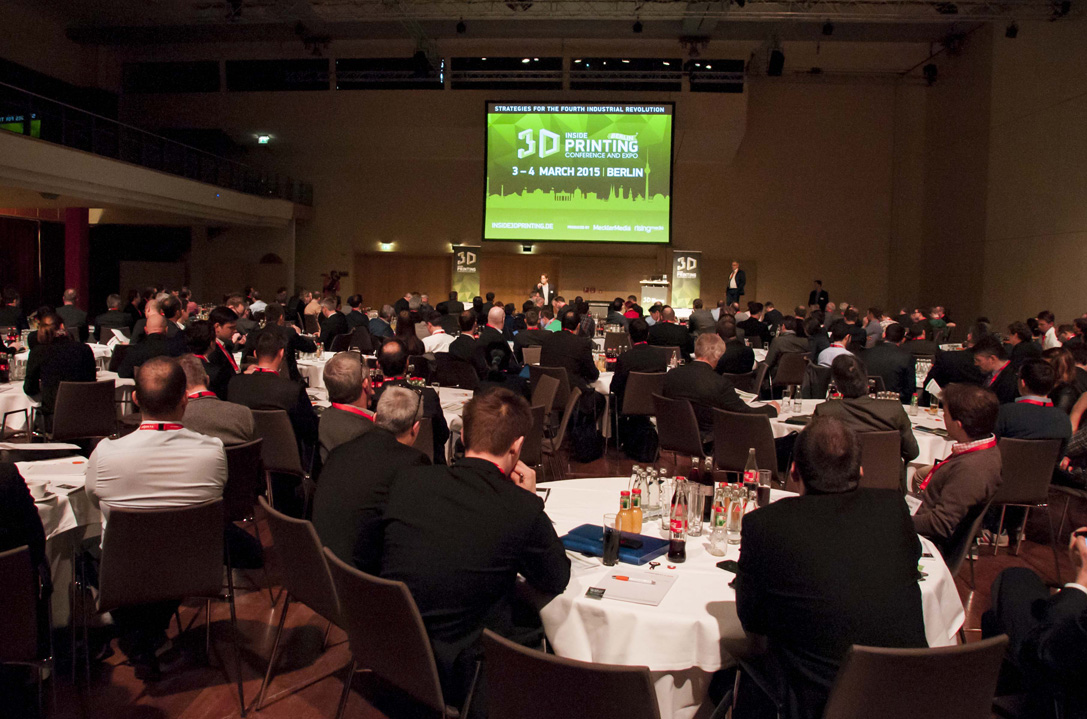 Terry Wohlers shared some of the key trends and considerations in his opening keynote, with some interesting facts for both those who are new to the industry, as well as those working within it. One of the opening remarks mentioned that the industry is now experiencing a level of interest and investment never seen in the sector before.  The 3D printing sector has nearly tripled in size in the past four years and Terry shared the latest growth figures for 2013, which amounted to nearly 35% growth. Further on, he tackled some myths that persist around 3D printing, with well founded analysis as to why there won’t be a 3D printer in every home going forward or why all 3D printers are not capable of producing industrial-quality parts – in contrast to the way that the industry is sometimes portrayed in the mainstream media.

The key takeaway from Terry’s keynote was that there is a strong transition into manufacturing within the 3D printing industry and we are now witnessing several large companies investing into this technology, such as GE and Airbus, to mention two. He also noted that there are now several “mega service providers” built by the likes of Stratasys, 3D Systems, and Materialise catering to the need for bringing in industrial quality parts for companies wanting to utilise 3D printing technology. According to Terry Wohlers the 3D printing pie is growing at a fast pace and the expectation is for the industry to positively explode in the coming years.  For more on his firm’s analysis of the industry, you can look into the Wohlers Report 2014. 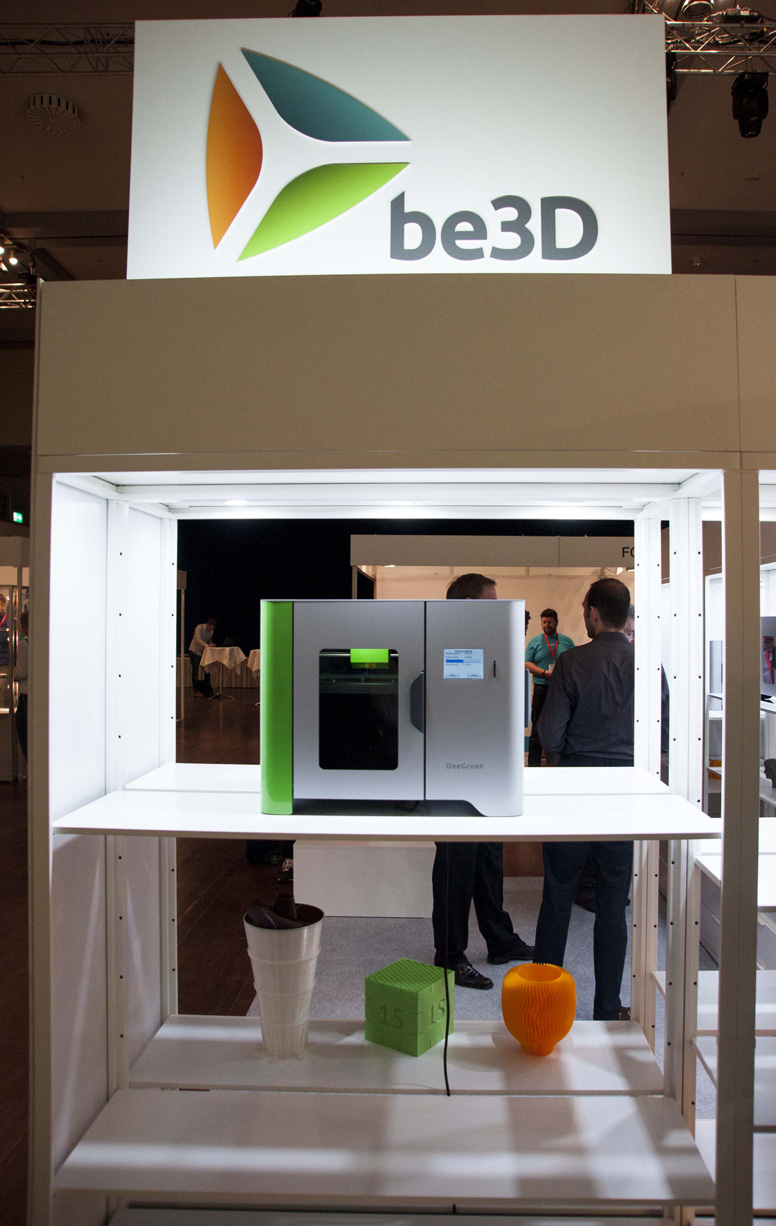 The exhibitor list at the event is impressive, including some long-standing companies, such as Renishaw and SLM, as well as some newcomers like be3D. The CEO of be3D, David Miklas, and his team were displaying their new desktop DeeGreen model and the large, professional DeeRed 3D printer at their stand. The three-year-old company from the Czech Republic are making a mark in the industry by targeting professional users for prototyping and have an interesting sales and maintenance network set up across 19 countries via their co-owner company, Ysoft.

We also had the pleasure of talking to Martin Hermatschweiler, the CEO of German-based Nanoscribe, a company pioneering the field of additive micro fabrication. With their systems used widely in the research community, the latest applications of Nanoscribe’s technology are in photonic wire bonding, micro robotics, and 3D nano-architectures are truly impressive.  This is certainly a company to watch going forward. 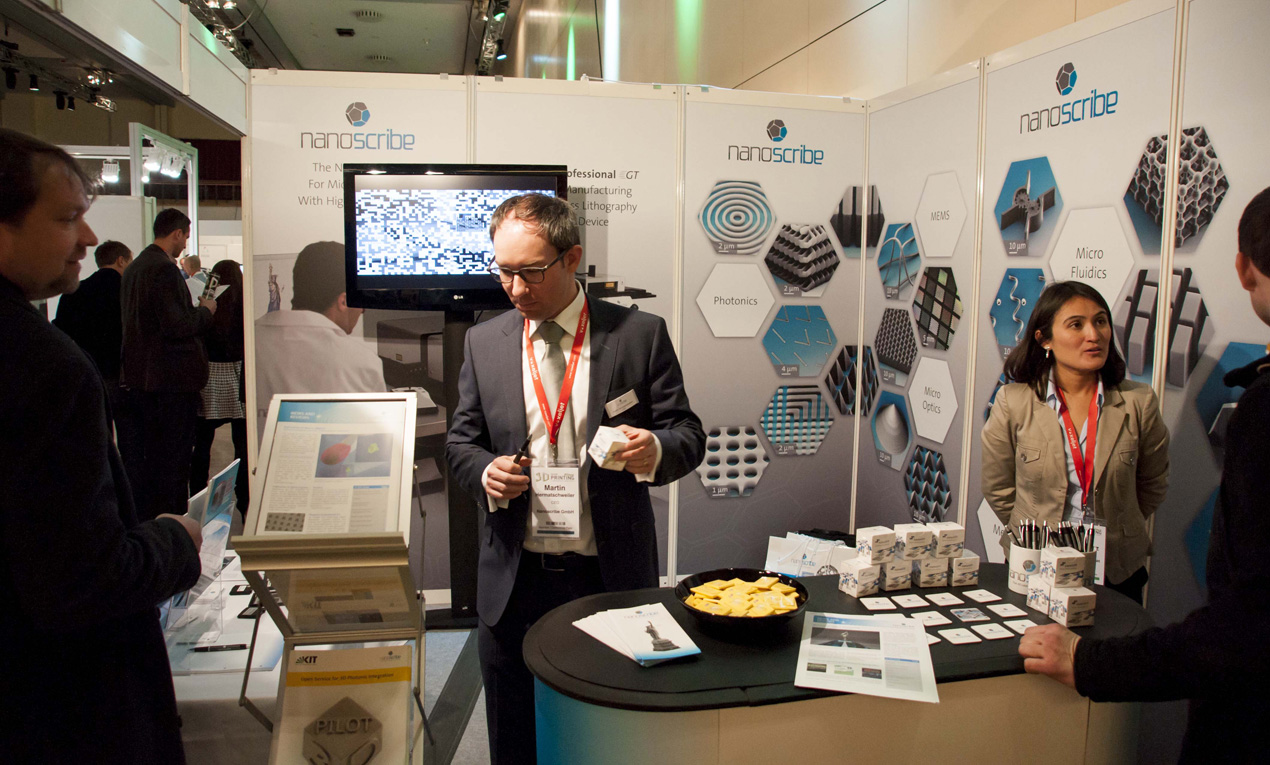 The MakerBot Europe team was also exhibiting at the show, together with their General Manager for MakerBot Europe, Alexander Hafner. Alexander sounded very positive about their outlook in Europe, as MakerBot have made a considerable investment in several areas ranging from the serviceability of their Replicator products to supporting the diverse markets across their target clients. Interestingly, we discovered that, in their estimate, approximately 70% of Replicator customers are using the 3D printer for professional use, rather than for personal use.

The event provided a networking lunch, which was a great opportunity for everyone to mingle and make new connections. The show already had over 1,000 registrants before the doors opened and it truly showed in the first day on the floor. Several large German engineering companies attended to find out how to incorporate 3D printing in their practices and many others learning what this technology has to offer – great value for any attendee in a country that is, in many ways, at the core of manufacturing globally.