IndustrialRevolution.MGX: Materialising a new era in product design – with 3D printing in Shanghai

More and more stories regarding 3D printing have recently been coming from Asia. It should come as a no surprise, if you think of the manufacturing dependent economies in the region, such as China, and the potential disruptive effects of 3D printing in manufacturing the future.

Many 3D printing companies such as Objet and Materialise have established a strong presence in Asia, which looks like a smart move considering not only the B2B opportunities, but also the vast B2C market potential.

Materialise was among the first organisations in Asia to the open doors to a 3D Print Gallery, which it did in Shanghai in December of last year. The exhibition, named  IndustrialRevolution.MGX: Materialising a new era in product design, is running at the 1933 building until the end of June 2013.

The exhibition features a variety of highly influential and internationally renowned designs, created using 3D printing technology at Materialise’s Belgian headquarters. The range of items on display has been selected based on their power to inspire other product designers, artists, engineers and the general public.

Highlights of the exhibition

Patrick Jouin is a remarkable contemporary designer, with over 46,000 contributed designs to the urban landscape. 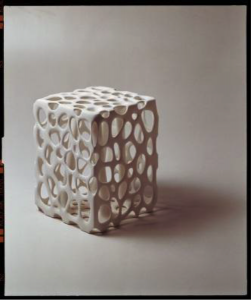 The S1 stool is a part of Patrick Jouin’s Solid Collection, which was cited as the most popular seedling after the iPhone in the New York Times. 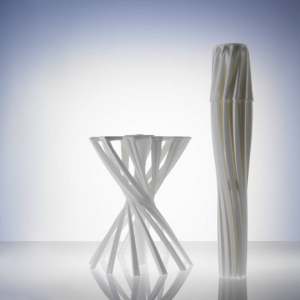 Being the first item ever created in one piece with fully articulated joints, the One_Shot.MGX stool is probably one of the most iconic pieces in the .MGX collection.

Bloom table lamp features a unique shade that collapses and expands to release or contain light. It’s printed as a single piece including hinges that transform the shade from bud to a blossom.

WertelOberfell was founded in 2007 by Gernot Oberfell and Jan Wertel, who both studied industrial design in Stuttgart at the State Academy of Arts. Their work explores lighting and industrial products as well as experimental pieces. 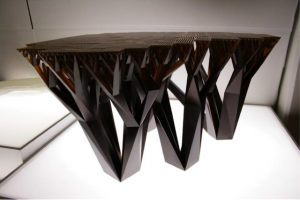 Fractal.MGX is a coffee table that is inspired by studies of tree’s fractal growth patterns. It was designed in collaboration with Matthias Bär and manufactured as a single piece without seams or joints, using stereolithography and epoxy resin.

Luc Merx founded his practice Gagat international in 1999. The Netherlands Foundation for Visual Arts, Design and Architecture gave him the opportunity to study the parallels of late baroque architecture and the influence of computers in modern architecture. Luc designed his first piece for .MGX named Damned.MGX in 2007. 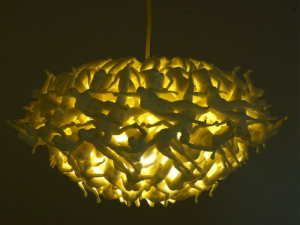 The Damned.MGX chandelier was produced as one piece without joints or seams using additive layer fabrication. It would have been impossible to produce with any other manufacturing method. 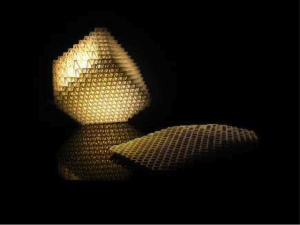 The Volume.MGX lamp was produced as one piece using 3D printing. It expands from a completely flat shape to a fantastic form to display shadow and light.

Sulan Kolatan and William MacDonald are both graduates from Columbia University, where they have been teaching architecture for more than 10 years. KOL/MAC founded in 1988 focuses on linking unique digital design methods to new methods of construction, technologies and materials.

The Root Chair by Kol/Mac 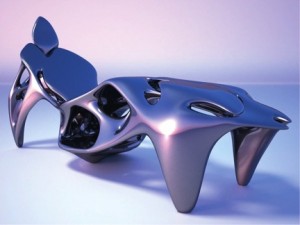 Along with Patrick Jouin’s S1 stool, the Root Chair was created in collaboration with .MGX. It is the largest 3D printed, single piece furniture item.

Peter Jansen, a son of an inventor, has truly developed a unique way of looking at the world. With a background in mathematics, physics and philosophy, he has used highly specialized software to create virtual objects, then transposed them to 3D objects using 3D printing. He created new virtual worlds from mathematical point clouds, and then explored the interrelataion of movement and space. 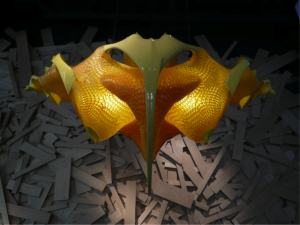 Julia.MGX is a chandelier based on a fractal structue of the “Julia set”, derived from fractal mathematics. Julia.MGX is a 3-dimensional projection of a 4-dimensional shape, which makes it look different from every angle.

The Runner by Peter Jansen 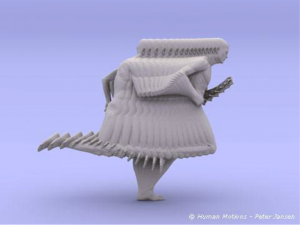 The Runner is a display of understanding of human movement. It belongs to a series of kinetic figures called Human Motions, which reveales the movement of runners, gymnasts, football players and karate experts.

If you have a chance to visit Shanghai, we would highly recommend trying to include a visit to IndustrialRevolution.MGX on your itinarery. They can be found in Room 1-214, 1933 building, No. 10 Shaijing Road, Shanghai.