Back in May, Marine Capt. William Mahoney was forced to make an impressive emergency landing of an AV-8B Harrier jet on the deck of the USS Bataan after his nose gear failed to deploy.  In the video below, you’ll see Mahoney perform a perfectly vertical landing of the jet, without the front wheel, onto an ordinary stool.  What many who watched the video may not have been aware of was the subsequent repair of the Harrier with 3D printing after the hard landing took place.

To get the jet repaired and back into the fleet as quickly as possible, technicians on the Bataan and designers at Fleet Readiness Center East (FRCE) at Marine Corps Air Station in Cherry Point, North Carolina 3D printed specialty forming tools to aid in the replacement of the jet’s damaged part.  First, FRCE aerospace engineer, Doug Greenwood, worked with a team aboard the Bataan to remove the Harrier’s nose cone to assess the situation inside.  Greenwood explains, “The hard landing damaged a portion of one of the structural frames in the nose cone.”

The team noted that only one area of the jet’s frame had been significantly damaged and, so, set about replacing that section with a spare frame from FRCE.  Greenwood continues, “Sheet metal reinforcements, called ‘doublers’ would be needed to mate the donor section with the undamaged portion of the frame, which remained in the aircraft. The challenge for FRCE was to manufacture the reinforcement doublers and get them to the ship for the repair.”  In order to get the doubles to the aircraft carrier, designers at FRCE worked with CAD models from the Original Equipment Manufacturer of the original part.  After receiving the OEM’s 3D model on June 25, FRCE was able to turn around a new design for the sheet metal forming tools.   They, then, set about 3D printing the parts to be shipped to the Bataan. 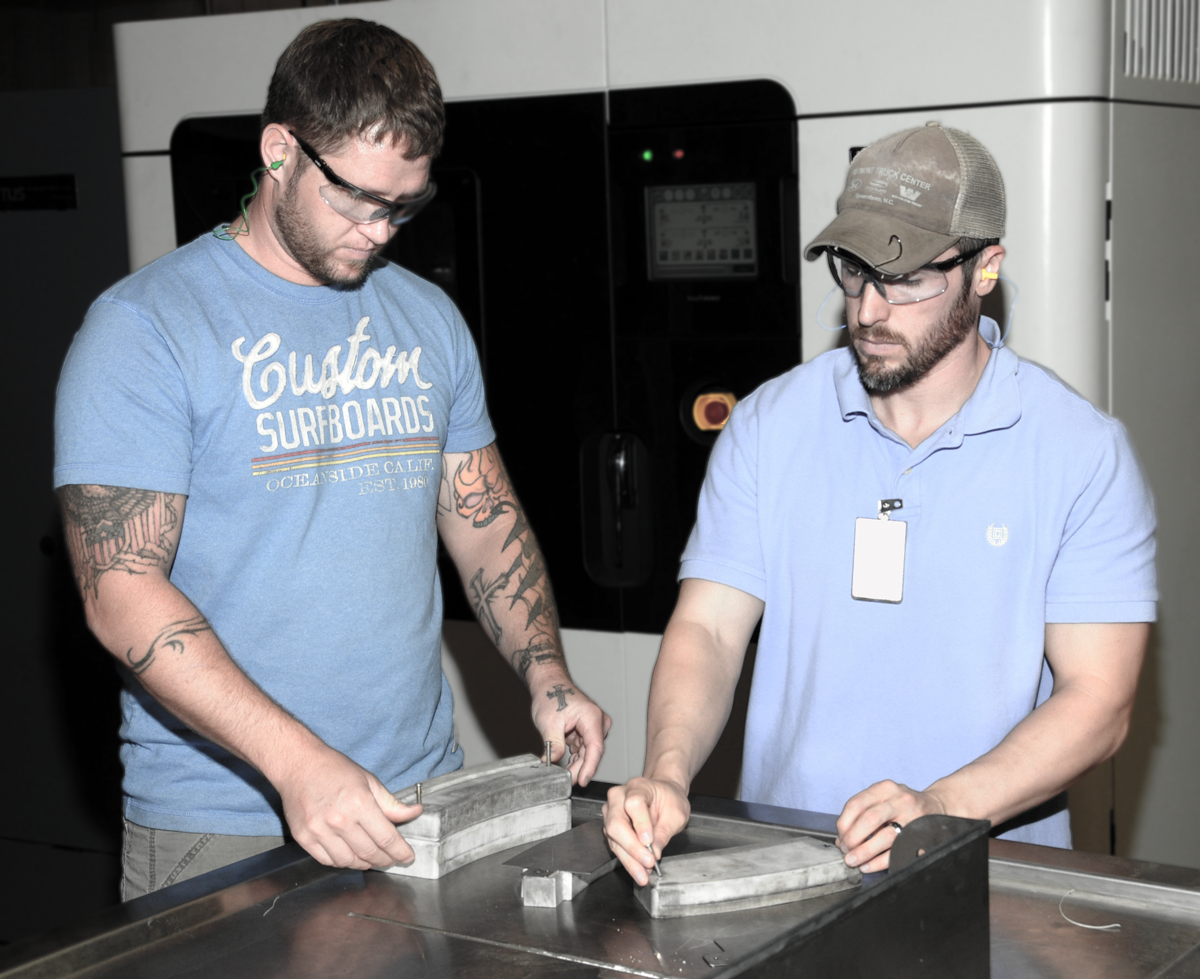 Greenwood elaborates on the process, “The tools were built using a polycarbonate material chosen because it has a high compressive strength that can withstand high-pressure presses up to 4,000 pounds per square inch (psi).” 3D printing the forming tools took about five hours for one part and thirty for a second set.  By June 28, the flat patterns were formed into the appropriate doubler parts with the use of these 3D printed tools, with quality control taking place during the forming process.  Once the new parts were heat-treated and painted, they were ready to be sent off to the Bataan.

Greenwood explains that, without 3D printing, the entire process would have taken much longer, “Using traditional, nondigital tool design and building processes, manufacture of the doublers would likely have taken two to three weeks. Using the 3-D digital data and AM, time and cost were reduced significantly.”  He adds, “On July 2, one week after receipt of the solid model of the frame, both sets were on their way to the Bataan to repair the damaged aircraft.”