iMakr — 3DPI was in Attendance at the First Grand Opening

The first of the two Grand Openings of the iMakr 3D printing store in London took place last night. The second is happening tonight. After building up a mystery and much speculative coverage about where the store was, exactly, in the preceding weeks, the precise location was finally revealed on Monday evening when I discovered my London bound journey from the North would lead to a final destination of Clerkenwell Road in Farringdon.

After a rather hellish rail journey I was starting to head towards grumpy, but a friendly face at Euston with a waiting cup of coffee prevented that getting out of hand. Arriving pretty promptly at no 79 Clerkenwell Road at 6.30 pm, the time given for the big reveal, a throng had gathered around the store front and was backing up in both directions. There was much chit-chat and expectant excitement among the gathering masses that stood in front of green-curtained windows, which started to turn to foot tapping and impatient whispers as the time ticked towards 7pm, even despite the drinks and canapés that were served while we were waiting on the pavement.

I think it was just after 7pm that Sylvain Preumont, the French entrepreneur that founded iMakr, started speaking through a microphone from the doorway. Unfortunately the microphone did not help to convey his message to any but the closest to him. However, as he continued to talk the curtains fell away to reveal working 3D printers (Cube, UP! And Solidoodle3), together with printed models and the smiling, waving 3D printing VIPs headlining the opening event. Among these I snapped Adrian Bowyer – the founder of RepRap.

Finally, however, the doors were swung open allowing everyone in! The surge was inevitable. The contemporary style of the shop space was welcoming and filled up pretty fast. The whir of the 3D printers working in the window was drowned out by visitors — the vibe was a good one. There were 3D printed table displays and many others placed on wall fixtures from some well-known designers including the stunning work of Mark Bloomfield and Yvonne van Zummeren. Mark, who I have known for a while now, was in attendance and I had the chance to catch up with him over some fizzy stuff. He is excited to be involved with iMakr and, being based in London, is expecting to be spending quite a bit of his time there — his 3D printed jewellery will be available for purchase. Mark is working hard to evolve his collection and is now exploring working with metal materials and a combination of metal and nylon, he told me. Yvonne, unfortunately, couldn’t make it — family commitments together with a new King in her native Netherlands prevented it. But her designs kind of do speak for themselves. 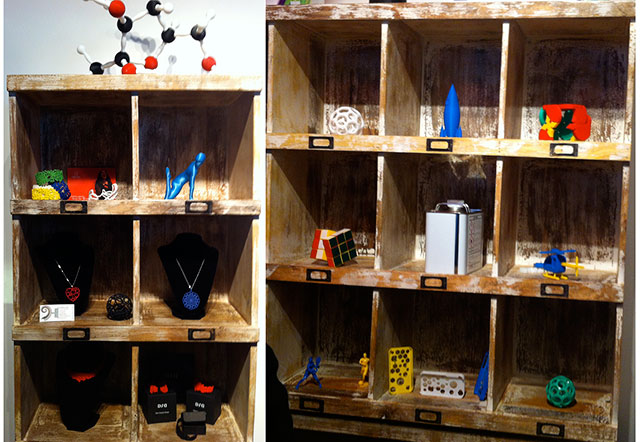 Space was tight, and it was hard to move freely between exhibits of working printers as mentioned above, scanners (I saw a Kinect but pretty sure there were others) and design software (notably the Cloud9 software from Anarkik3D with a 3D hapticated  mouse). In addition, even as I tried to see everything (as you may have noticed, I failed) people kept stopping to chat and the 90 minutes I had (after the late start) before having to head back for my train flew by. I didn’t manage anything but a brief wave and “hi” with Adrian, as he was, not surprisingly, inundated with enquiries about the running TriColour RepRap machine. I did get a little more time with his daughter Sally, however, who works with Adrian at RepRapPro and she showed me some of the improvements they’re getting with the colour prints. More to follow on that. Similarly, with Tatiana of iMaterialise, she was constantly surrounded and I only got a very quick hi. But lovely nonetheless.

I also got to have a chat with Sam Cervantes, CEO of Solidoodle. He had the original smaller 3D printer (retailing at £300) running next to him on the shop floor, while the later Solidoodle3, somewhat larger, was running in the window. Incidentally, all of the window displays were attracting attention from passers by — pointing and rather confused expressions were the general impression I got. Sam is a smart guy, committed to the cause of making 3D printing accessible but fully aware of current limitations and where Solidoodle fits into the market. The price point of the original Solidoodle, with a fully assembled, plug-and-play approach does have an appeal that matches its aesthetic. It is not surprising that the company is successfully growing. I did comment that I thought that while the printers at this level in the market are probably not consumer ready they were perfect for classrooms and would appeal to the growing “maker” community greatly. I don’t think he quite agreed with me on that, but thought it was an “interesting” perspective.

I was delighted to run into Paul Harter and his wife who are continuing to develop PrintCraft, the kid-friendly Minecraft 3D printing application. Good things are happening there — more information will follow on that imminently. 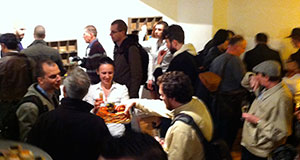 Clare Cunningham, Director of UK 3D printing material supplier, Faberdashery, was present last night with her colleague and co-founder James Rhodes. The extensive Faberdashery range of coloured PLA for 3D printing, uniquely available by the metre, can be purchased from the iMakr store. I have heard many good things, particularly regarding the quality of the materials supplied by Clare’s company from users, but also some comments that it is on the expensive side. When I posed this during my chat with the guys, Clare was unapologetic and unflinching in her riposte, proudly stating that it was the result of wholly manufacturing in the UK and the quality control this allows. I totally respect that, I have to say. 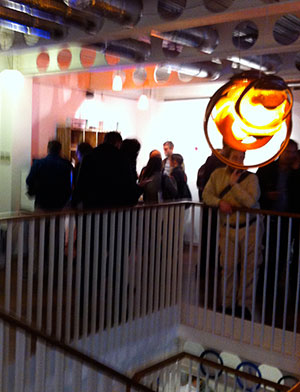 Conversations in person with a number of people “I know” from the Twittersphere were another welcome result of being at iMakr last night. I caught up with John Barlow of Formeit, Terry Ashton of Justappi, Nimesh Thakrar, Romain Kidd of PressPin and Saied Tehrani of FabGate — all of whom have very interesting ventures developing around the 3D printing evolution. As things come to fruition and more direct conversations take place I will ensure they are all covered in more depth on 3DPI. Some definitely sooner than later! Twitter is great for making initial contact but nothing beats meeting people in person, and that was probably my favourite outcome of being at the iMakr opening yesterday.

So, in terms of iMakr itself. They have a really splendid location in the heart of a creative district of London, the shop space is welcoming and contemporary. I predict that they are going to get plenty of footfall from the interested and the curious as well as some dedicated customers, but in terms of how that translates to sales, I am more reticent. The premise behind the store is fantastic – workshops and education are central to the remit. I imagine that the 3D printed products that will be on sale from Thursday (nothing was available for sale last night, and no prices were given either) will also go well, whether or not hardware/software sales will prove as easy is another matter entirely and, for me, it has a large question mark over it. The answer, I suspect, will only emerge with the passing of time.