Herman Miller, the iconic furniture design company behind the Eames and Aeron office chairs, has turned to 3D printing to slash development time.

The American company behind the legendary Aeron chair that has a place in the Museum of Modern Art and the Eames that has been copied around the world, is a natural partner for the likes of Stratasys. It is a design-led company that needs to create endless prototypes to refine its concepts into the perfect finished product.

Much of the company’s development happened at its UK facilities in Bath and Chippenham, but it recently combined these two sites into one 15,974m square HQ in Melksham. The idea was simple, Herman Miller wanted to unite its workforce and create a new R&D center that could help take the company forward. Portal Mill, the glamorous new HQ, is the result of their efforts.

As part of this radical restructure, the company invested in the Stratasys Fortus 400mc, which should help slash its development time.

3D printing has largely taken over when it comes to prototypes as companies don’t need to invest in any tooling and bespoke machining is now a thing of the past. Even then, outsourcing all of its 3D printing requirements meant that the team often had to wait up to 10 days to get a model or part back from the supplier.

Now the designers can have parts or scale models the next day. For a company that relies as much on the visual impact as it does on the ergonomic comfort of their chairs, this is a massive advantage.

It means they can tweak a design and see the results of their work almost instantly. They can also experiment with radical concepts now they are freed from the constraints of outside suppliers. The results could be spectacular.

“Our chairs have an instantly recognisable, organic, ergonomic style, and we are constantly introducing new designs,” says Stefan Kogut, R&D Workshop Lead at the Portal Mill site. “When I was tasked with finding a 3D printer in order to reduce the lead-time and spend incurred by outsourcing, we decided that the Fortus 400mc was the perfect machine for us.” 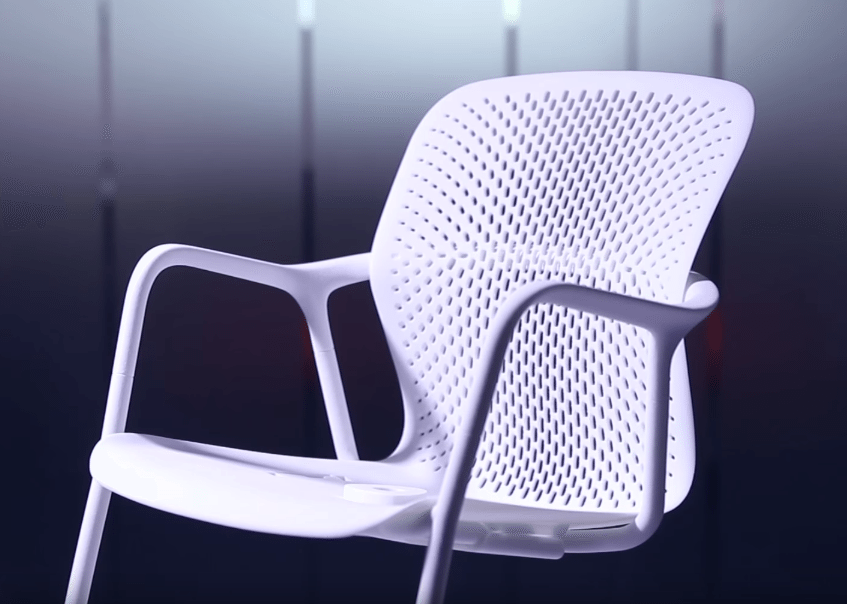 Scale models can scale the time

The Fortus 400mc has been used for final production parts by a number of companies. Herman Miller didn’t need that final level of polish in its thermoplastic models, though, and they are largely a visual representation, a scale model of the chairs it will go on to mass produce.

The printer has still allowed the company to experiment with a number of different physical solutions and 3D printing has already changed the shape of the next Herman Miller chair.

“Among the many prototype parts to benefit is the cradle, which forms the back of an office chair,” said Kogut. “Despite being a large nylon part, we have managed to print it with ease.”

Herman Miller spends an almost unbelievable two years on the development cycle of each and every chair. The Director of Research, Design and Development, Nick Savage, believes that he can now cut that timespan.

“The exploration phase at the beginning of each project is about coming up with ideas, while the launch phase at the end of each project sees the first production run of components,” he said. “The bit between is where we always struggle in terms of trying to reduce that cycle of time. This is where we are now using 3D printing to great advantage. In our test labs we can now model, build and test within a very short timeframe.”

Herman Miller has become the watchword in quality office design over the last 90 years in business. As it homes in on 100 years in business it is good to see an American icon staying in fashion and changing with the times thanks to the help of 3D printing.