Here's All of the Breaking News from MakerBot at CES

As 3D Systems announces its newest products in drips and drops at CES 2015, Stratasys’ MakerBot has poured it all out at once, revealing the entire expansion of their MakerBot 3D Ecosystem for the beginning of the year.  The company will be expanding their consumer 3D printing brand with new materials, partnerships, and services, with the company’s CEO, Jenny Lawton, saying, “CES 2015 is different for us in that we are purposefully not introducing new 3D printers at CES this year. Instead, we are focusing our efforts on creating the most comprehensive MakerBot 3D Ecosystem to support our customers.”

The company’s first big product offering is a new series of composite PLA filaments.  Catching up with Colorfabb and Kai Parthy‘s unique filaments, MakerBot will be selling Metal, Stone, and Wood filaments for their fifth-generation MakerBot Replicator, along with a new Smart Extruder to use the materials. 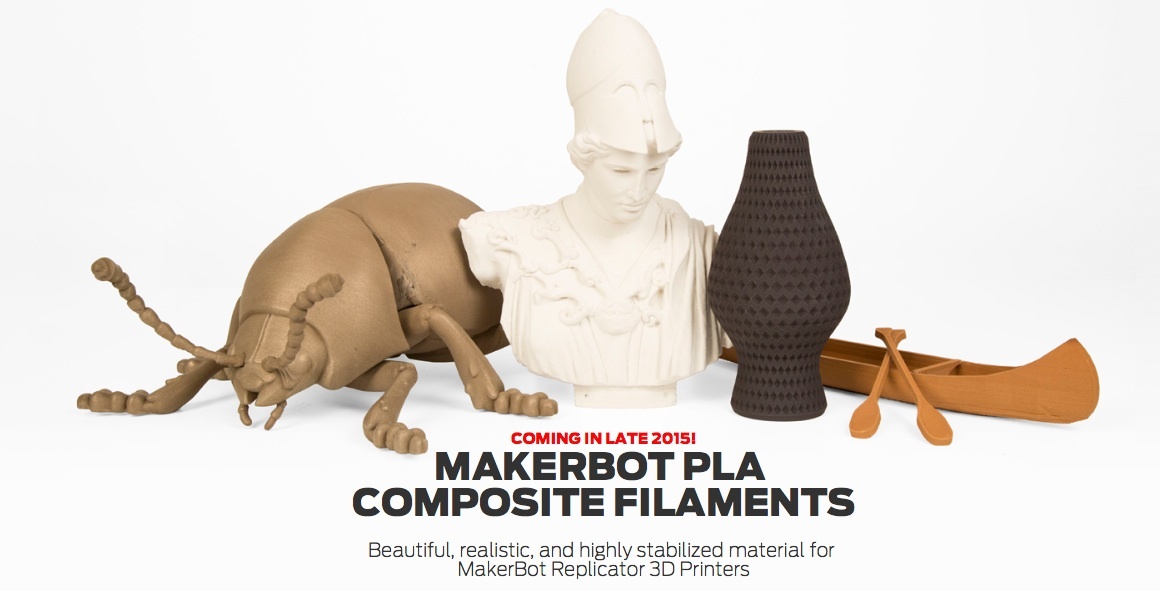 In one of their bigger announcements at CES, MakerBot has partnered with The Foundry to allow users to publish directly to Thingiverse from the Foundry’s MODO 801 3D modeling app.  At the moment, all of the major 3D printing players are competing in the 3D modeling space, with Stratasys and 3D Systems purchasing CAD companies.  Photoshop is adding more and more 3D printing companies and services to its 3D modeling tools.  And Sketchfab turned their model sharing site into a 3D printables repository in one swoop.  With the MakerBot Kit for Modo, users can work seamlessly between Thingiverse and the 3D modeling software to edit designs and upload them for sharing and printing, as well as create photorealistic renders for their objects – directly competing with Sketchfab.

MakerBot has also launched a Professional Services division, meant to provide customers with the knowledge and resources to effectively use the company’s 3D printing products.  The complete suite of services include: Consulting from MakerBot, MakerBot Learning, 3D Design Services by MakerBot, MakerBot 3D Printed Products, and MakerBot Innovation Center Management Platform.  This new division consolidates many of the brand’s previous operations under a single roof, while expanding their services to specifically address 3D printing in businesses and schools.

Further refining their fifth-generation Replicator, which already had monitoring and some wi-fi capabilities, the company has developed what they call MakerBot Mobile True Remote Printing and Monitoring.  Presumably, this means that these capabilities will be even more complete, with the MakerBot mobile app able to control the entire printing process.  In this regard, the company has managed to keep apace with other Maker technologies, like AstroPrint, meant to control prints via the web and mobile devices.

Also at CES, MakerBot announced the winners of the GE FirstBuild Icebox Challenge.  The 3D printable accessories for their smart refrigerator are now available on Thingiverse as the company, along with GE FirstBuild, announces the release of their new ChillHub smart refrigerator, which you can read all about on 3DPI.

MakerBot’s Digital Store is continuing to expand with their famous and felonious partner, Martha Stewart.  At CES, attendees can see some of the new, yet-to-be released designs of 2015. 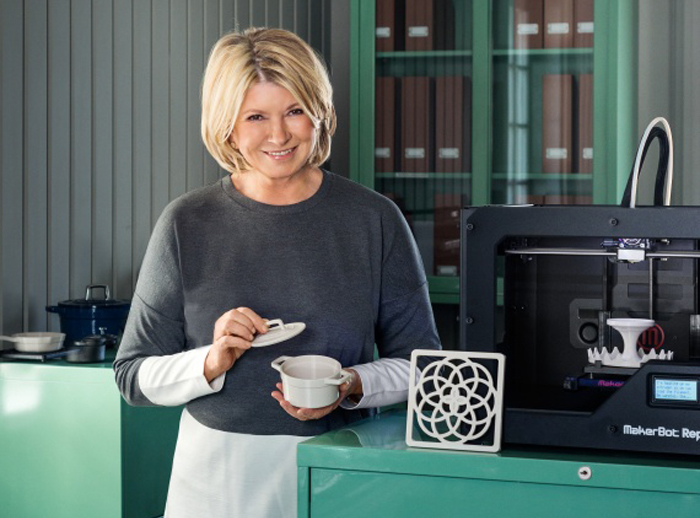 MakerBot CEO, Jenny Lawton, says of their expanded ecosystem, “Last year was a really big year for us. We brought three new MakerBot Replicator 3D Printers to market, plus we launched numerous other initiatives including MakerBot Desktop, MakerBot Mobile and MakerBot PrintShop; we introduced the MakerBot Digital Store and brought on licensed partners Sesame Street, Uglydoll, Hello Kitty and Martha Stewart; and we expanded our global presence with MakerBot Europe and our retail presence to the point where MakerBot Replicator 3D Printers and the MakerBot Digitizer™ Desktop 3D Scanner are now available in more than 500 retail stores throughout the U.S. and Europe. That is a lot. For 2015, we are focused on enhancing the overall MakerBot 3D Ecosystem by listening to our users, fine-tuning our 3D printers, iterating our software and apps to unlock their full potential, and launching new MakerBot PLA Composite Filaments as well as services that will make 3D printing even more interesting and accessible.”

She adds, “We know there is a lot of hype around 3D printing. We also know that 3D printing is not plug and play. It can be challenging and that is why a major emphasis is on creating a MakerBot 3D Ecosystem that helps make 3D printing easier and more accessible. At CES, we want to ground the hype and showcase how educators, businesses and real users have incorporated MakerBot 3D printing into their daily work and lives.”

Though it may sound like the company’s product offerings at this years CES are limited, we may see the company release other products slowly throughout the year, as its parent company solidifies other business plans in the background.  I’ve also been tipped by Mike Balzer at AllThings3D that the company may be working on a unique piece of technology that has yet to be released, but I won’t say more until I know for sure!