Adidas may not be launching a 3D printed shoeline at the Super Bowl, but that doesn’t mean that they aren’t already intimate with the technology. The company has been using 3D printing to prototype its shoe designs for some time. No stranger to 3D printed marketing schemes, the shoe manufacturer has reminded the public once again that 3D printing and Adidas are good friends with its pop-up 3D print shop in London recently.

Last week, the company’s casual line, Adidas Originals, set-up a pop up shop devoted to their Stan Smith shoe series. The tennis legend was honored with a giant Stan Smith shoebox located in the middle of the Old Truman Brewery in London, where patrons were treated to a 3D printing experience. Inside, customers could not only purchase a limited edition pair of Stan Smith shoes, but also have them personalized with 3D printed accessories produced by a wall lined with 3D Systems Cube printers. In addition to the personalized lace locks, customers were invited to replace the image and autograph of the tennis legend, typically found on the tongue of the shoe, with their own faces and signatures using the “Stan Yourself” app. 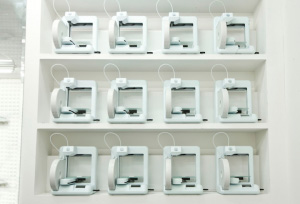 If there’s anything that 3D Systems knows, aside from acquiring cool businesses, it’s how to market itself. Even though enlisting will.i.am as their CCO was probably not just a marketing ploy, it certainly brought a lot of attention. The company has now tied itself with a shoeline cool enough to receive Kanye’s endorsement, even if Kanye’s coolness is on the downward slope.  You’ve got to hand it to 3DS. From their sleek machines to CEO, Avi Reichental’s sleek sense of style, they know how to look good.