With the recent announcement of a partnership between 3D Systems, now one of only two 3D printing giants in western markets, and Deloitte, the internationally renown audit, consultation and advisory brand; and increased corporate, and particularly military, interest in 3D printing, data security is increasingly taking centre stage in the minds of those in, and entering, the young sector. What is the currently emerging picture on this topic?

This Sunday’s Wall Street Journal sees an article on 3D printing and data by Deloitte, now very much engaged in analysis of Additive Manufacturing technologies and the ramifications of 3D printing upon corporate risk and strategy.

Deloitte is new to this area, and, I would propose, is learning the ropes, as the otherwise strong article overlooks a number of developments. The article begins with an example of an application of 3D printing with previous propositions of use met with highly cynical reaction: 3D printing shoes (such as the audience reaction to the popular YouTube ‘Explaining the Future’ series by 3D printing evangelist  and Associate Professor at Computing and Future Studies at Nottingham University Business School, UK: Christopher Barnett):

‘Press a button and a pair of shoes that smell like bubble gum emerge, fully formed, from a 3D printer. ‘ Sound far-fetched? Tell that to Melissa’s Shoes, a Brazilian footwear company that recently “printed” its first pair of brightly colored, plastic sandals.¹

…Mike Brinker, a principal at Deloitte Consulting LLP who leads Deloitte Digital: “Or, it may soon be possible to extrude cement. Engineers could potentially set up huge 3D printers at a construction site to ‘print’ the foundation of a building.”

3D Printing of cement is already possible. Indeed, also, whilst yet to be proven by architectural application where large tensile forces are applied to the printed, the almost-alchemist, Kai Parthy from CC Products, creator of famed FDM / FFF filament Laywoo-d3 wood, has recently released a brick filament. See Juno’s 3DPI’s article here.

Interestingly, on the subject of 3D printing buildings, a very hot debate with tens of 3D printing industry insiders participating, is currently raging (at times literally) in the LinkedIn 3D Printing group ‘3D Printing’ over an IndieGoGo project that presents a synopsis of creating a portable kit that allows the creation of the shell of a building.

The creator of the project, who, right now according to my inbox updates, is battling to prove his mettle against many cynics, has currently accepted my invitation to discuss his project, possibly with one of the fiercest critics, in a forthcoming 3DPI article. Stay tuned…

Correcting Deloitte aside, their massive experience is a huge asset regarding analysis of infrastructure logistics, training, management and the rest of the breadth of range of impact of the move to incorporate 3D printing into industrial processes. Data, indeed Zeitgeist ‘big data,’ is about to become central to 3DP.

“As they begin to engage in additive manufacturing, companies will implement advanced design technologies, along with numerous computing tools to run simulations and to test and track the quality and durability of products,” says Cotteleer. “Vast amounts of data will typically be required to operate these tools and support critical additive manufacturing processes.”

And that data, like all information stored in digital form, is vulnerable to corporate espionage, cyber-crime hacking, and, primarily in 2013, the geopolitical cyber-war being waged right now between the world’s old and new Hyper Powers.

The economic competition between World Powers, and the IP battle between the gargantuan corporations of the globalized free market may well produce some examples of the theft of 3D-printable design schematics far sooner than we think. 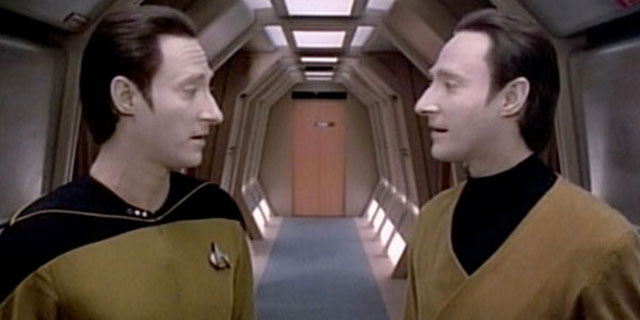 Perhaps the biggest lesson regarding the affect upon society by technology in 21st century is that infrastructure becomes increasingly fragile the more it becomes dependent upon technology. That trend is irreversible. Although, this author would speculate that the technology of the mid 21st century will be increasingly based upon biological materials and organic technology, as DNA / RNA based data storage, then biological meta-materials, become increasingly used in the stead of our current orientation around oil, metals, and electron based power.

Back to the near future, this author agrees with Deloitte’s summary:

‘Companies will be producing products in an entirely different way, one that is heavily reliant on technology and monitoring capabilities that IT can provide.’

Nowhere is the vulnerability of 3D file data to cyber theft going to be more pressing that in the inevitable military applications of additive manufacturing.

Stripes.com, a US based publication for public domain military information, only yesterday [20.07.2013] released a well researched article on this subject. The onus being particularly naval military applications, where the ability to make, in situ, has always been a historical problem, akin to food supply for troops – a variable that has won and lost many a battle: from the ancient Roman era to the 20th century’s catastrophic world wars.

“It’s an evolving technology, but I think it has incredible potential,” Navy Lt. Cmdr. Michael Llenza, senior naval fellow at the Atlantic Council’s Brent Scowcroft Centre on International Security, told Stars and Stripes. “I see it as an enabler for sea placing because it can cut down on the lengthy and costly supply chain.”

Inevitably, geopolitical competitors and allies are equally interested in this strategy:

‘Interest in the technology is global. China claims it is printing aircraft parts and putting them directly into J-15 fighters, Llenza said. “There are a lot of countries pouring a lot of money into this.” ‘

This, despite the almost desperate sounding trumpet from large US based media outlets regarding additive manufacturing being the technology which will ‘bring manufacturing back to the USA… ‘

I cannot possibly understand how political policy makers, military media spin moguls, and non-subject specialist journalists, could have ever thought this. What possible lack of foresight would mean that other World Power’s such as China would not invest in a similar strategy for additive and advanced manufacturing? Perhaps US based thinkers are still accustoming to the US no longer being the world’s richest nation? Perhaps there was a want to induce an atmosphere of nationalist protectionism regarding the industry? Those who know would probably not say…

Interest in 3D printing for military applications is global. Thus, maintaining the design advantage becomes paramount. Future war, although doubtful to technologically resemble anything like the wars of the 20th century, is founded upon the similar principles.

The era of ‘total war,’ orientated around the destruction of a Nation-State’s industrial capacity, such as the blitzkrieg forces of Nazi Germany and the dam-buster bombing of the Rhine valley during World War Two: Destroy an enemy’s ability to manufacture military technology, and the battle is won.

Logically – insomuch as this author ever could believe war to be logical – the dislocation, merging and blurring of Fordist mass production by / with additive manufacturing processes shifts that strategy to attacking digitally stored 3D files. 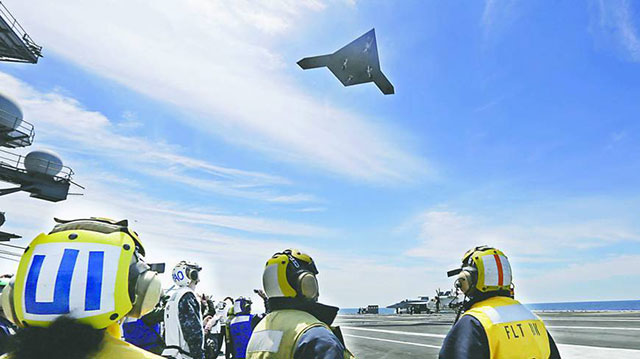 Your UAV drone is being created onboard your aircraft carrier utilizing Laser Sintering and other additive methodologies. Last week saw the first successful landing of a drone on an aircraft carrier by the USA.

All appears to be going well, the parts of the craft are printed, assembled, tested. The drone prepares for take-off. The 3D file that was subtly hacked by your geopolitical rival and replaced with a file that is almost completely the same, but for minor coding alterations which undermine the integrity of the craft and its ability to withstand the forces of take-off.

The drone suffers a slight structural fracture in a key area. It spirals back to the deck of your carrier, exploding and claiming the lives of a number of personal.

Data protection for 3D printable files is about to become more important than data protection for your personal information, your corporate communications and, possibly even your Nation-State’s military databases.

If one cannot make, one cannot wage war with anything more than sticks and stones.

How ironic perhaps that Einstein suggested, allegorically, that a Fourth World War would be fought with such tools?