Every year for the past eight years Manchester, England hosts its Manchester Science Festival to proudly pay tribute to the scientific arts, bringing a number of scientists and researchers together to expose the public to exciting new endeavors and technologies.  And, with every festival, the city’s MOSI (Museum of Science and Industry), the producers of the event, host an exhibition dedicated to a specific theme.  This year, their theme of choice is 3D printing.  As a part of their “3D Printing: Printing the Future” exhibition, MOSI wanted to 3D print a legendary Manchester icon and, because he will be participating in this year’s event, they chose Bez, the famous freaky dancer from 1980’s alt-rock group Happy Mondays.

Mark “Bez” Berry began his fame as a strange, lanky dancer that performed alongside Happy Mondays, as they played their hits “‘Enery” and “24 Hour Party People”.  He later went on to be a part of the band Black Grape and to star in BBC Two Sunday show Science with Bez. Aside from a couple of reunions with Happy Mondays, Bez also starred in Celebrity Big Brother, but he’s most recently made headlines for his intention to run for a seat in Parliment as a staunch opponent of the dangerous well-stimulation technique known as fracking.  For that reason, Bez will be highlighting the earthquake and water polluting effects of the process in a debate on fracking at the Manchester Science Festival. 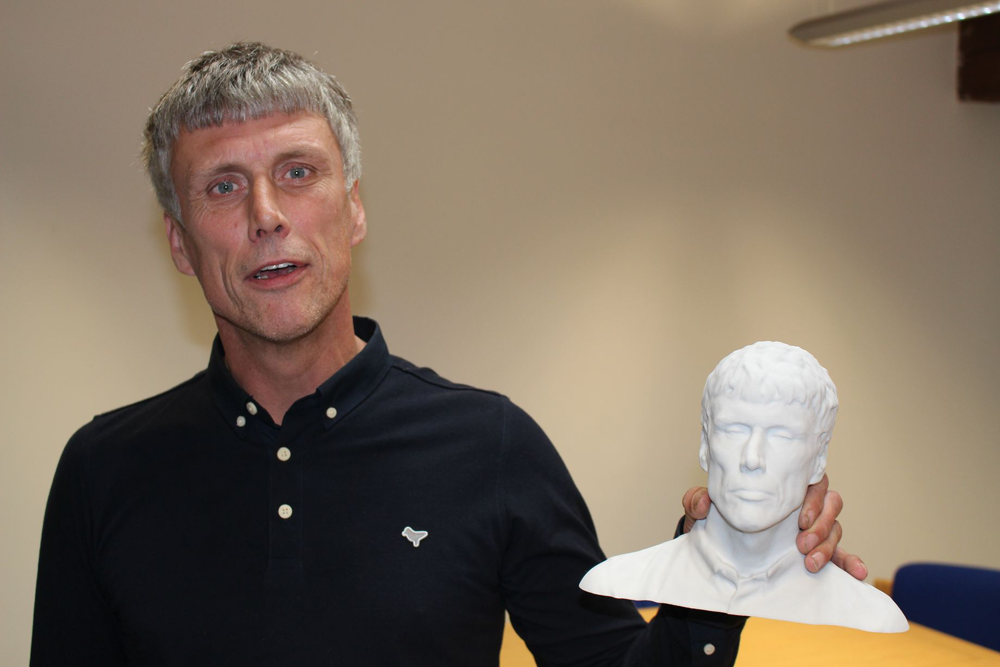 In honor of Bez’s participation at this year’s event, MOSI scanned the artist-turned-politician’s head with the help of Hobs, a repographics company located in the city’s Northern Quarter.  Mapping his likeness with a laser scanner, Hobs 3D printed a 50% scale model of Bez, who told the Manchester Evening News, “It was a little bit strange watching this 3D effigy of yourself appearing on the screen! But the actual technology is amazing and the uses they can put it to are incredible: rebuilding people’s facial features after accidents, putting in stem cells. When I sat for the scan, that was the first time I’d actually seen it (the 3D technology), so I left the place feeling quite informed what you could do with the technology.  I’m glad they did choose to ask me because it’s such an honour and I’ve been looking forward to seeing what I look like to everyone else.”  When asked about 3D printed guns, he responded, “It’s like all technologies – anything can be used for good and bad. Let’s hope that we go on to use it for the positive rather than the negative, for the good of mankind.”

Along with the printed Bez bust, the festival will be displaying the world’s first fully 3D printed bike frame.  Also at the event will be the MegaMenger project, meant to be the world’s largest fractal cube, as well as a performance piece surrounding animal noises from artist Marcus Coates called The Sounds of Others: A Biophonic Line.  Performing at the festival’s launch party will be members of the band Elbow and the BBC’s DJ Christ Hawkins.  All of this and more will take place at the Manchester Science Festival from October 23 to November 2.