Maker Faires are quirky. The Inside 3D Printing Conferences and Expos are informative. I hate to say this, but the best adjective for the feel of the 3D Printshow that will be taking place in London and Paris this November is… “sexy”. I have never used (and will never again use) that word to describe anything but my wife, but from the sleek website to the presentations, to the “secret features” and the award show, this is the second installment of the 3D printing event that feels so palatable to the trendy members of society.

For instance, consider the 3D Printshow Hospital.  Here is an installation that rivals the work I’ve seen at CalArts (and certainly my own “Welcome to RealityTM” installation).  This exhibit is a hospital simulation that includes six different rooms manned by industry experts and medical specialists presenting case studies and live demonstrations on 3D printing in the field of medicine, such as 3D printing organs and prosthetics. The event will also host a 3D Printshow MovieZone that will feature printed objects used in cinema, a 3D Printshow Museum to demonstrate the use of the technology in historical studies, and a 3D Printed Home that will display a simulation of how 3D printing will be used in the future. There will even be “secret features” that “include some of our most exclusive content, projects that we’re currently developing and products that we’re not even allowed to announce.” 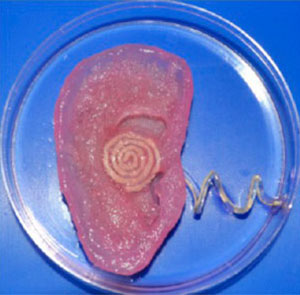 Then, of course, there will be talks by industry folks covering a variety of fields being revolutionized by 3D printing. Joshua Harker will be there to discuss the potential for art with AM.  Michael Mc Alpine will cover the 3D-printed bionic ear. And, because the event is broken up into three days and multiple lecture halls, there are way too many other speakers that require more room than there is to cover here.

Along with the various talks and booths that will be at the 3D Printshow, the event will also hold an awards ceremony to accomplish two things:

1. To create a platform for the recognition of excellence within the 3D Printing industry.

2. To organise a night for socialising, networking and enjoying our hospitality among the brightest and best of the 3D printing world.

Among the categories, there are Best Consumer Printer of the Year, the Green Award, and the Award for Educational Excellence.  And, rather gratifyingly, your very own 3DPrintingIndustry.com has been nominated for Best Business Newcomer! We’re listed alongside the 3Doodler, FormLabs, Modla, and Pirate3D – some pretty tough competition, so I’ll say now that it’s an honor to have even been nominated in the first place. Because this award is listed in the “Business” category, it will be determined by members of the business community.  You can still vote for us, though, in hopes that we can bring home a “People’s Choice” award.  We’re already working on our reaction:

This year, the show will first take place in London at the Business Design Centre from November 7th to the 9th, followed by a stint in Paris from November 15th to the 16th. And tickets to the event are quite affordable, with a 2-day adult pass running at £34.99.  To be honest, I’m a little jealous that Rachel attended last year and will most likely be the one attending this year, too! Either way, I’m glad that the 3D Printshow is pushing the envelope of what a conference can be, paving the way for more interactive components and even some full-on Disney-esque simulacra!