In an interesting snippet of news that broke in the 3D printing world at the end of last week, 3D Systems has declared that co-founder and Chief Technology Officer, Charles (Chuck) Hull has sold more than half of his shares in the company. This is the guy most consider to be the father of 3D printing, recognized as he is, for filing the very first patent for a rapid prototyping system (stereolithography) and being at the helm of 3DS when the company sold the first commercialized system a couple of years later. 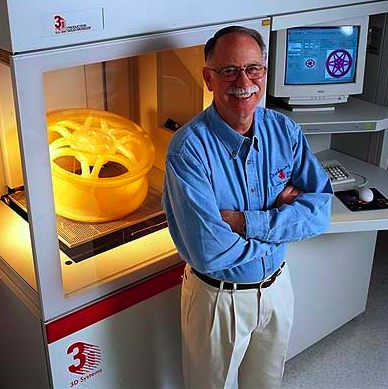 It seems Mr Hull has sold 500,000 of his shares in a transaction on Wednesday, 13th March, leaving him with a holding of 355,015 shares indirectly and 106,500 shares directly according to 3D Systems SEC filing on Thursday, 14th March.

The markets got a little jittery as a result when 3D System’s shares subsequently fell by 4.2% to 30.66 the morning after a trend that continued.

There are no details as to the motivation behind this move by Mr Hull – one can only speculate. My best guess would be that retirement might be beckoning and the peak of the 3D printing hype cycle will set future Hull generations up nicely — who could possibly blame him!?