I won’t go so far as to call this a 3D farm printer, but the explosion of desktop 3D printing has raised awareness of classic CNC technology so that a new generation of innovators is applying the technology in unique ways.  The FarmBot is one of the latest, applying the same principles of a 3D printer or CNC mill to planting and harvesting crops. 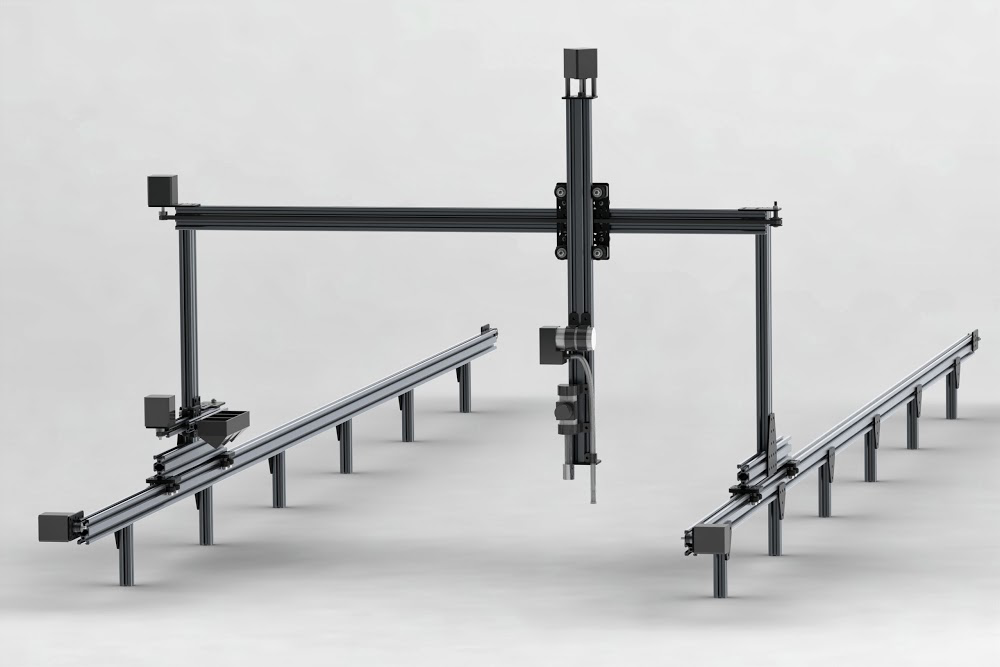 Take a basic RepRap 3D printer, with guide rails and a gantry made from V-slot extrusions, and replace the printhead with any number of farm tools.  Examples suggested by the FarmBot’s creator, Rory Landon Aronson, include: a seed injector, watering/fertilizer/pesticide nozzle, a tilling implement, a plow, a cutter/shredder, a discer, a burner, a combine/harvester, and a robotic harvesting arm.  Then, blow that printer up to the size of a given piece of farmland and get to work.  Aronson describes his machine – for which he’s done substantial research and planning, but has yet to construct – as follows:

FarmBot hardware employs linear guides in the X, Y, and Z directions that allow for tooling such as plows, seed injectors, watering nozzles, and sensors, to be precisely positioned and used on the plants and soil. The entire system is numerically controlled and thus fully automated from the sowing of seeds to harvest. The hardware is designed to be simple, scalable, and hackable. Using the open-source web-based software package, the user can graphically design their farm to their desired specifications and upload numerical control code to the hardware. Other features of the software include storing and manipulating data maps, a decision support system to facilitate data driven farm design, access to an open data repository, and enterprise class analytics.

Aronson, who graduated from Cal Poly with a degree in Mechanical Engineering,  sees the machine as providing numerous advantages to current farming systems.  With a computer-operated, all-purpose machine, farmers would be able to plant and space their crops with machine precision and optimize the amount of water, nutrients, and pesticides each plant received.  The FarmBot would ultimately be outfitted with the following sensors to provide continuous feedback to the FarmBot for dynamic care: a moisture meter, thermometer, rain gauge, psychrometer for humidity, anemometer for wind, a pH sensor, incident light meter, computer vision, hyperspectral imaging, and a mass spectrometer. Then, the machine would be fully automated, working 24/7 to weed out the bad and tend to the good crops. 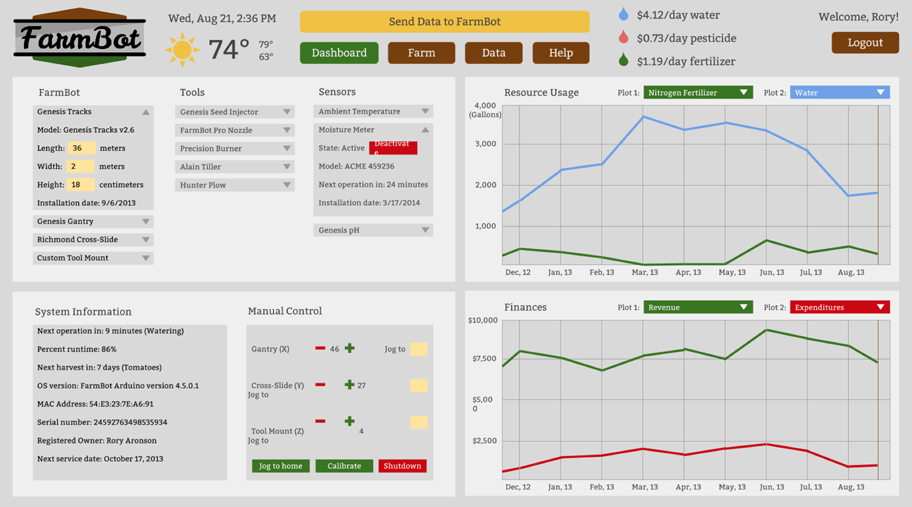 The engineer begins his FarmBot White Paper by suggesting that the global food shortage and world hunger may be addressed with the technology.  His hope is that, as the FarmBot is open source and runs on low-cost electronics like an Arduino Mega and Ramps Stepper Shield, anyone would be able to hack together such a machine in a small plot of land and begin producing their food locally.  Aronson argues:

FarmBot’s scalability allows anyone with access to a computer and a yard, some land, or even a roof to be able to install and operate a FarmBot. By open­sourcing the technology as well as designing for simplicity, hackability, affordability, and accessibility, FarmBot will lower the barrier to the average person to grow food. Ideally, farming knowledge and special skills will never be needed to install and operate a FarmBot.

By making the choice to grow food accessible, FarmBot will help to democratize food production, giving the power of food back to the people. No longer will food production practices, availability, and prices be determined by the food producers, the government, or the economy.

I’m not sure that there aren’t other, less technological ways to address world hunger – like international social welfare programs that redirect food otherwise wasted by first world consumers to those in need or a more egalitarian economic system – but his machine does present a possible advance in agriculture. 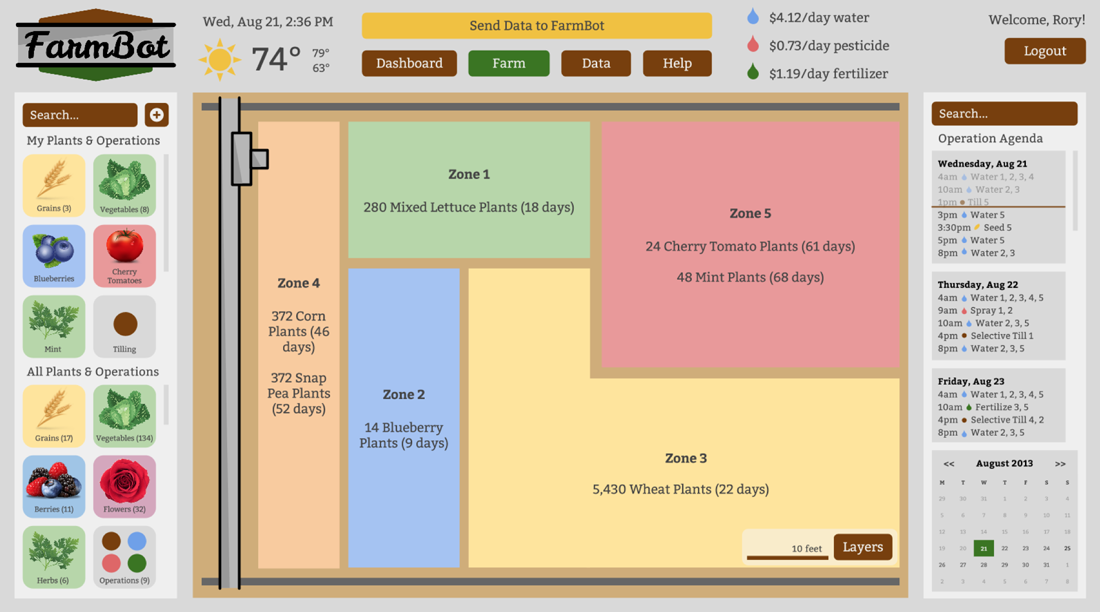 I’m also not all that familiar with current agriculture technology; however, looking at the Harvest Automation robots, it looks as though mass manufactured systems similar to FarmBot would be expensive, as Harvest’s robots are in the $25k to $50k range, and these are much smaller machines that navigate a crop row by row.  Aronson estimates, giving a detailed bill of materials, that FarmBot would, in its most basic form and standing at 1.5m wide, 3m long, and 0.5m tall, cost $1301.  In his BOM, I don’t see any pricing for the sophisticated sensors or the various tool heads he hopes for, but it’s a start.

Even if such a system couldn’t maintain a low-cost, the smart data feedback system could maintain a more sustainable method for tending to crops.  Once the system was perfected, inexperienced farmers might be able to grow their own food in the manner suggested by Aronson.  From the white paper, it looks as though FarmBot will attempt to launch at some point on Kickstarter.  For now, he’s got a different project up on the crowdfunding site called OpenFarm, a “Wikipedia for farming and gardening”.  Watch the Kickstarter video below: