Evolving with the Industry: Live at Inside 3D Printing Santa Clara

It’s been two years since my first Inside 3D Printing event, which took place in San Jose, California just a couple of weeks before my wedding. Now, two years later, I returned with Danielle, now my wife, to Silicon Valley for Inside 3D Printing once again. Only this time, the event has grown to span numerous countries all of the world and, in New York and California, has metamorphosed to become 3D Print Week.

The most notable aspect of this year’s event, similar to what occurred in New York, was that the show could no longer be contained to a single topic of “3D Printing”. Either reflective of MecklerMedia’s growth or that of the 3D printing industry as a whole, the show was broken up into tracks specifically focused on such topics as 3D printing in medicine, design, business, and so on. Personally, I was most interested in the Virtual Reality Summit, as VR is the technology that I know the least about, but know could have a huge impact on 3D printing in the near future. For that reason, I’ll dedicate an article to that subject separately. 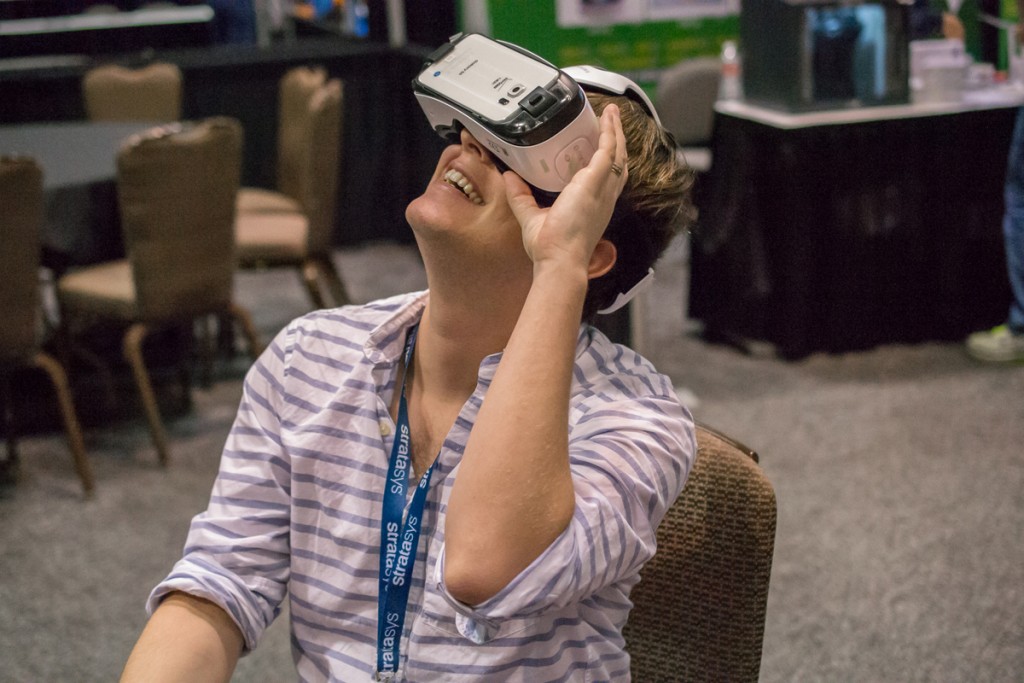 After a full day of tutorials on Tuesday, October 20th, the event’s official start on Wednesday was kicked off by a talk by Made In Space President Andrew Rush. I went into the talk expecting a cursory recap of the company’s work launching a 3D printer, capable of 3D printing in Zero G, to the International Space Station, which would naturally be impressive, but I also learned some fascinating new facts about the company’s work that I hadn’t picked up elsewhere.

For instance, as the company preps to send their next generation 3D printer, the Additive Manufacturing Facility (AMF), to the ISS, they’re also experimenting with 3D printing in multiple types of materials, including low-temperature metals. Additionally, Made In Space is working on making the machine upgradeable so that, when possible, it can be improved aboard the ISS to 3D print in even more industrial-grade metals. That is, if the ISS is still around. Rush pointed out that the ISS is scheduled to shut down for business in 2024! According to Wikipedia, the astronauts and cosmonauts will work to build a new ISS, but even if they don’t, Made In Space may be 3D printing on the moon by then, as they’ve been experimenting with 3D printing regolith from the volcanoes of Hawaii, which resembles the rock material abundant on Luna.

While Made In Space tackles those obstacles to 3D printing in space – including the 3D printing of, first CubeSats, and, then, large-scale spacecraft – there are countless businesses with a distinct focus on 3D printing down here on Earth. This was evidenced by the exhibit hall, which had grown to be 1.5 – 2 times the size of the original event I’d been to two years ago.  On top of that, this year, I actually had friends at the event, having been working for 3DPI since 2012. 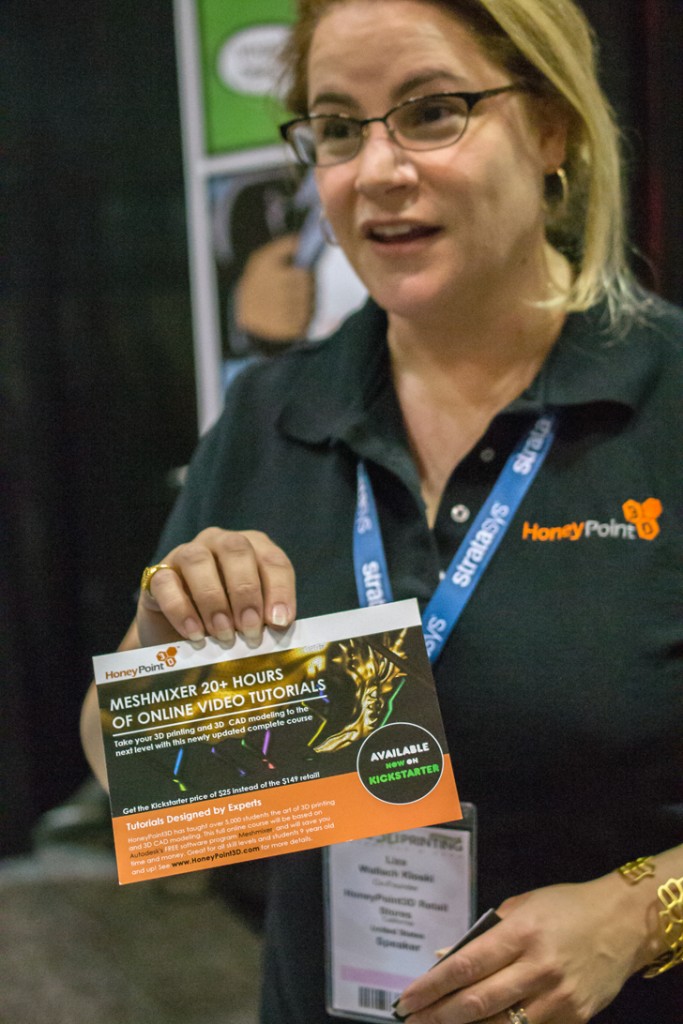 At one end of the exhibit hall was HoneyPoint3D, a growing retail shop and educational resource based in the San Francisco area. The last that I was aware, the store’s husband-and-wife team was looking to set up a few more franchises in the Bay, but, it turns out that they’re actually up to a lot more in the nebulous Internet than in the physical realm, for the moment. As they hold off on expanding their retail network, despite great interest from potential franchisees, Liza Wallach-Kloski and Nick Kloski have developed an online curriculum for 3D modeling and 3D printing, with one course on Kickstarter that gained a lot of favorable attention. The course, which somehow slipped under my radar, was in the top 8% of all Kickstarters launched in 2015 with over 176% in funding. This proves that the course’s subject, the ins and outs of Autodesk Meshmixer with more than 20 hours of tutorials, is a popular one that, Liza tells me, is being used by people the world over.  Liza and Nick have also, since, joined America Makes, the USA’s pilot 3D printing institute, and have other big news on the way, as well. 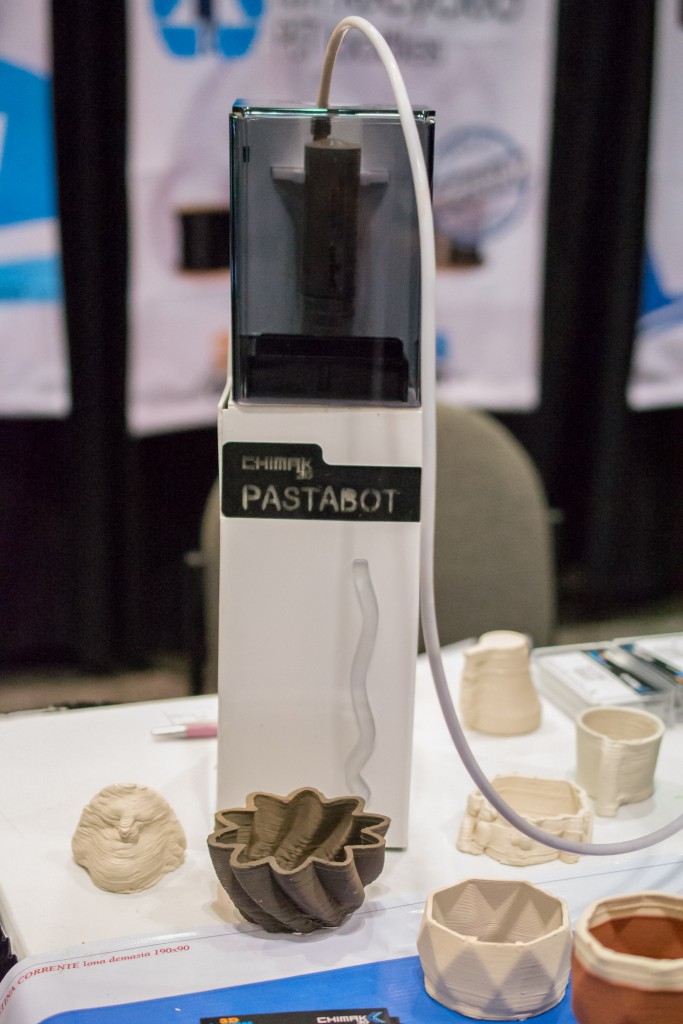 From abroad, there were numerous companies from as far as China, Argentina, and Poland. I met Yasin, a filament manufacturer from China, as well as Chimak 3D, a manufacturer of printers, filament, and extruders from Argentina. In addition to their three models of 3D printers, they have developed the PASTABOT, which, similar to Structur3D’s Discov3ry device, can be attached to their machines to extrude any viscous material, like pasta dough and clay. They’re also producing filaments from 100% recycled PET.

I also finally got to meet Zmorph, which had brought a whole suite of its hybrid fabricators, including their three new toolheads. The new milling head was working away at a piece of wood with great detail, while the mixing toolhead was printing a white and black wheel from what I believe was PLA. This multimaterial mixhead can combine two filaments of most types into a single print, either blending two colors or two materials without any streaking. Tomasz Wykowski, Sales Director at Zmorph, tells me that that it achieves this by purging material inches away from the print onto the printbed, in unused space. To demonstrate its capabilities, Zmorph had a polygonal reptile print that shifted from blue to greenish yellow, as well as a cube with a mix of transparent white material and red filament. Preet Jasani, whose DesignBox3D represents the company’s North American distribution, explained that, while the toolheads might seem intimidating to a somewhat entry-level user like me, the software makes it extremely easy to use any of the machine’s 12 functions. 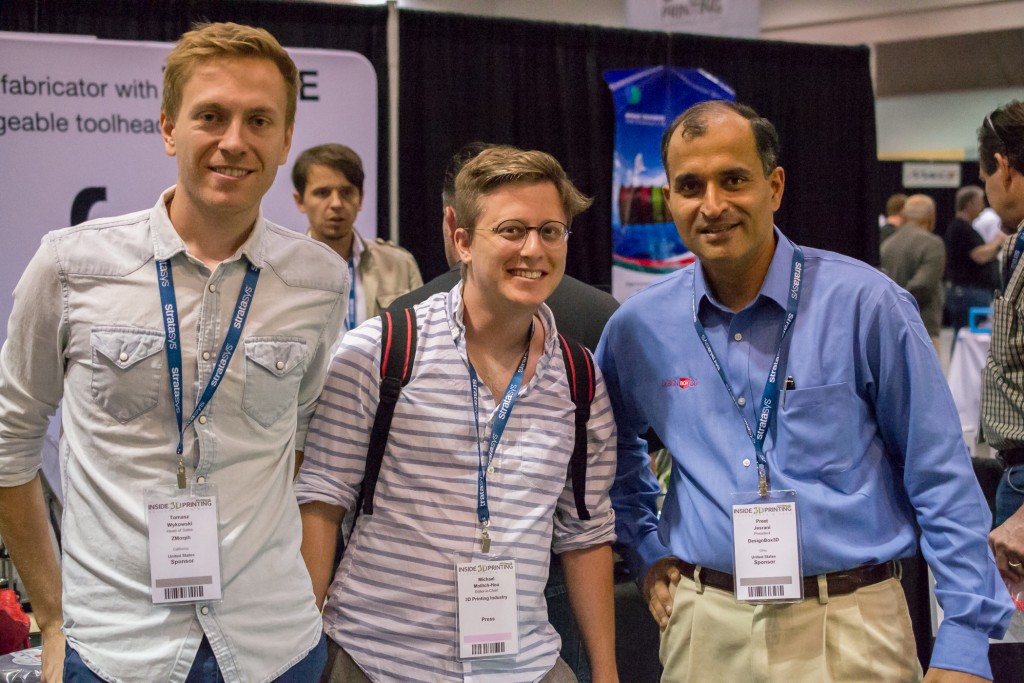 At the LulzBot booth, I got to see their new Flexistruder at work producing some pretty impressive and squishy prints. The Flexistruder maintains a tight hold on, typically tangly, flexible filament, like NinjaFlex, ensuring that the material is printed easily. Now that the company has gotten great feedback from their extruders, and equipment overall, they’ve taken to selling the hardware itself, in addition to their 3D printers. 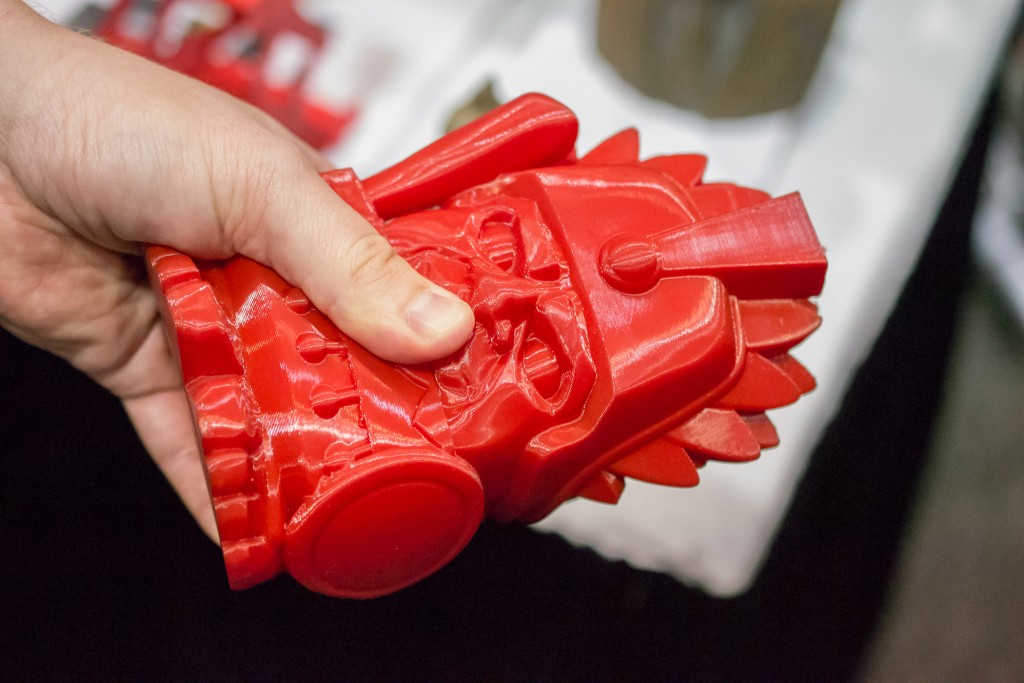 So, if you like their hexagon hotend, capable of reaching temperatures of up to 300 Celsius, you can purchase one for whatever type of machine you’ve got.  And, though Josh Bryant might be a Sales Manager for LulzBot, he was pretty convincing when saying that the extruders are quite easy to swap out on LulzBot machines. 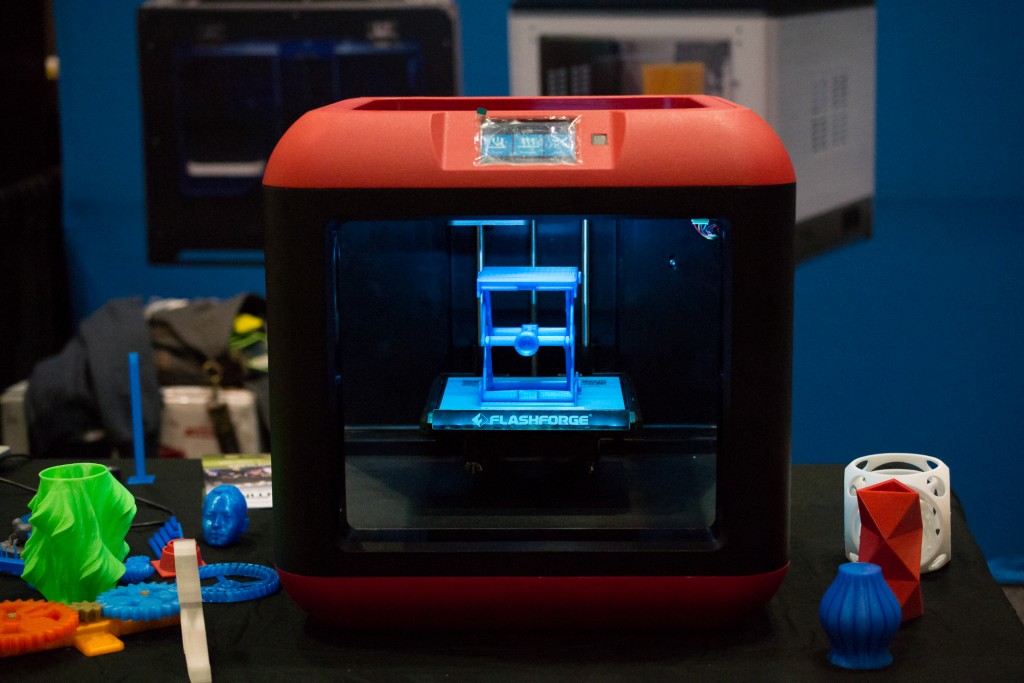 Other companies I caught up with were Formlabs, who were displaying their new Form 2; Tiertime with their complete suite of machines, including the new UP BOX; Raise3D, who are going strong on Kickstarter with an impressive line of new machines; FlashForge, who were displaying their new novice-focued Finder 3D printer; and M3D, who are happily retailing their Micro 3D printer. 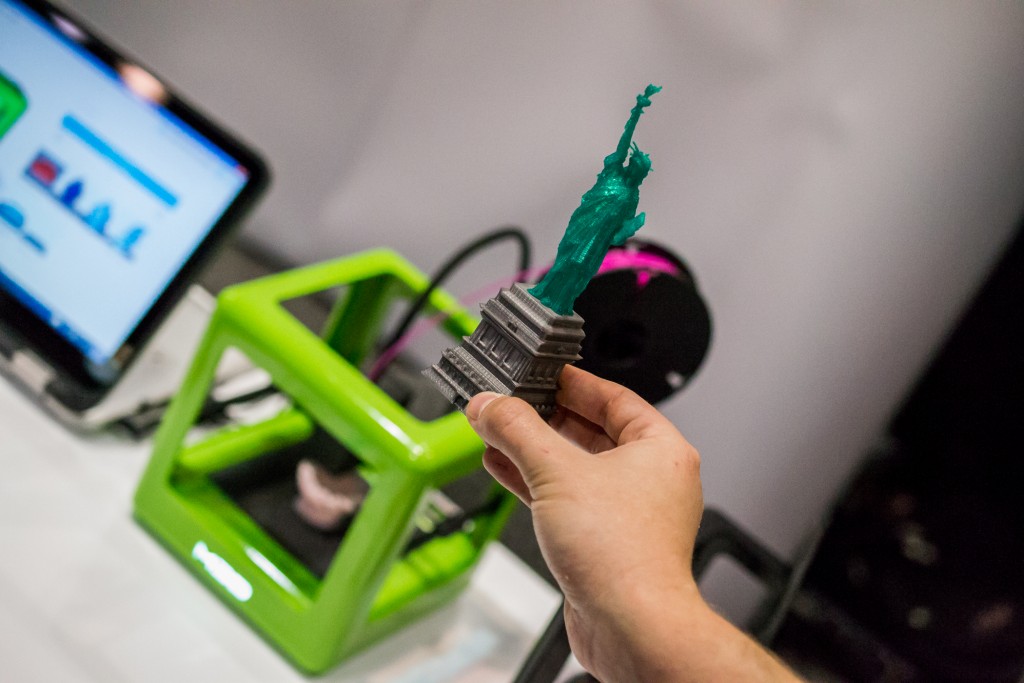 An engineer from the M3D team told me that their successful Kickstarter, which might be compared to some other failed Kickstarters, was made possible due to great engineering and a lack of “feature creep”. Though other failed crowdfunding campaigns promised a low price, success soon led to promising way too many features, like Wi-Fi and heated bes, that could not be delivered at such a low price point.  The Micro may not have a heated bed, but it was delivered to its backers as a great product at a great price. 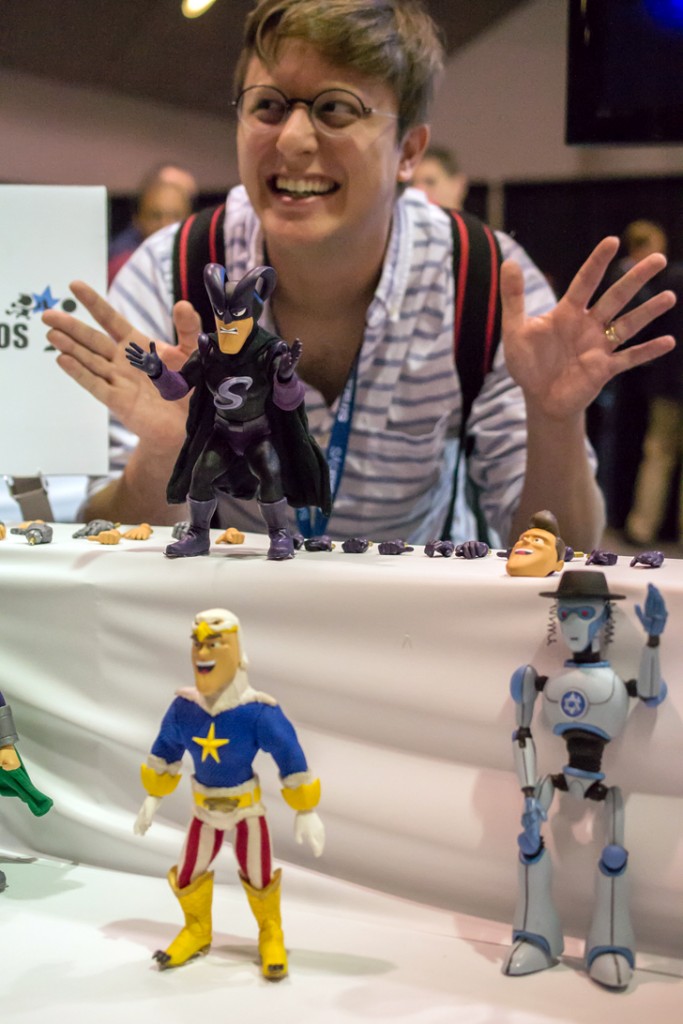 EnvisionTEC was also at the event with a whole table from Stoopid Buddy Stoodios, who were displaying just about everything they’d 3D printed for the new Bryan Cranston animated series, Super Mansion. Goddamn! These were some beautiful figures! All 3D printed on high-resolution EnvisionTEC machines, they had an extraordinary amount of detail. And Tommy Keiser, Director of Digital Design for Stoopid Buddy, told me that 3D printing had saved them tremendous amount of time on production.  To represent every gesture needed for the show, the team had 3D printed 2000 hands in only a few months, something that would have taken at least a year to produce by traditional means.  This amount of time saving, which they’ve also demonstrated in animating the Bratz and the huge-headed Madden 16, is leading Keiser to push the company to purchase even more machines.

There were plenty of new companies there, too, which I will likely devote a few articles to over the next week. Along with talks from Jeff Huber, Founder & CEO of Standard Cyborg; a round table on metal 3D printing; an “Ask the Experts” panel featuring Terry Wohlers; an entire track devoted to virtual reality; and knowledge that Inside 3D Printing is only growing to incorporate more technologies, like robotics, I can say that this year’s event was even more exciting than my first. Not just because the technology is evolving as I mature, but because, now, every time I attend, I have more friends than the last.

All photos by Danielle Matich of Volim Photography, unless otherwise stated.