I had a full morning of scheduled appointments lined up for the second day of Euromold. Going against all my instincts, instincts that in a nutshell can be condensed to “just wing it,” I agreed to fixed times and places to meet with various top 3D printing execs who wanted to talk about their respective latest developments and news today. As it turned out, with the exception of Al Siblani, CEO of Envisiontec, who was bang on time first thing this morning, my instincts proved right. A flurry of apologetic texts, DMs and calls meant that I did, as ever, end up just winging it throughout the whole day. Experience has taught me that at any busy show, schedules never run according to plan as delays caused by prior meetings, general conversations and developing business tend to disrupt even the most rigid of schedules — even despite the best efforts of determined PR people pointing at their watches and giving 2 minute warnings, which invariably means at least 5 minutes more! And the day is generally the better for it. 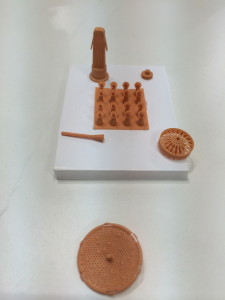 My meeting with Al Siblani and Martin Forth of Envisiontec was first up, as mentioned. It helped me dive deeper into the developments announced by the company at Euromold this year, as well as the motivation behind them and the applications that these developments are enabling. Few, if any, company leaders that I have met are as passionate in defence of their technology as Al. He has said passion in spades and his depth of knowledge together with his hands on capability make him a force to be reckoned with. Like many companies in the 3D printing industry, and a recurring theme this year in particular, Envisiontec is all about developing a holistic solution for its clients. Which is why the new products introduced this week are beyond just the hardware offering and incorporate some significant new materials. One, in particular made me stare hard — the finish, straight off the machine of the RC90 material is incredible. I would have sworn it was seriously post processed, but it required nothing and was as smooth as glass! Literally. The full interview will follow, assuming I don’t slit my wrists at the prospect of all the transcribing that will fill my days once I return to the UK. Some really insightful stuff, but unfortunately, some of the best conversation came once the Dictaphone was turned off along with a “this is for your ears only” disclaimer.

Talking of off the record, I had to leave the Messe and swear my life away to find out about a new tech coming next year. I can quite honestly say my head is still spinning because of the things I saw and heard. And no matter what clichés I may have used in the past to convey my amazement at developments in this industry, nothing, and I mean absolutely nothing, quite compares with this. Spring 2015. It’s going to be a pivotal moment when this goes live. Some things will stay the same, but a lot is going to be turned upside down.

It was delightful to catch up with some of the guys from AMUG this morning — Gary Rabinovitz and Dana Foster are always smiling and great company. Also present was Kevin Ayres who I have not met up with in person for quite a few years, but it was fun to reminisce about some events we both attended in the distant past. Body guards and all. 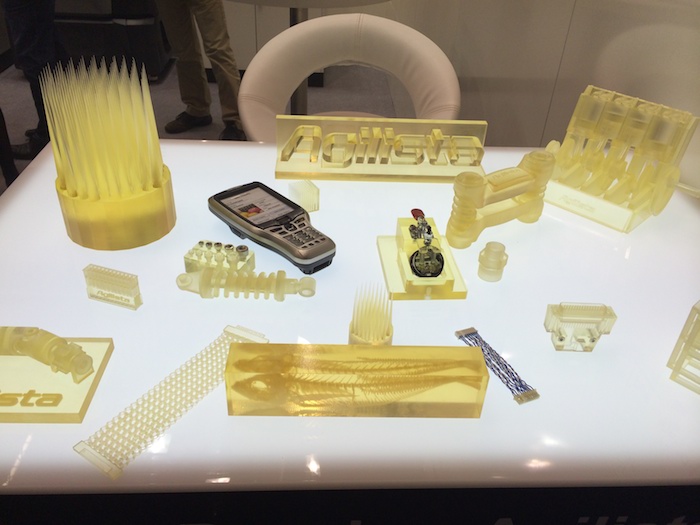 At one point during the day I was pointed to the Keyence stand. If you’re asking “who?” — join the club. I was advised to go look with little more information than that, other than a nudge and a snigger. So unable to resist a bit of intrigue, I did. I stood across the aisle trying to figure out what it was I was looking for before engaging and making a complete numpty of myself without some due consideration. It didn’t take long — among the hoard of identically dressed young girls dressed in the white, red and black brand-matched uniforms, were a couple of mid-range 3D printers and a mass of yellow coloured transparent-ish, impressive-ish resin 3D printed models. The machine platform looked familiar, placing it was a little harder, but unmistakably reminiscent of an Objet machine. I’ve subsequently been informed it was Objet circa 2009. Talking to two of the girls separately about the machines, it quickly became apparent they were working to a script and both closed the conversation with “let me take your card and someone will be in touch.” On the second pass, at this point, I asked to speak with a marketing manager, who quickly appeared beside me to ask what my interest was in the ‘amazing’ new machine. As soon as he (I can’t tell you his name, he had no business cards and I can’t read his writing scribbled on one of mine) discerned my accent, ie not German, he could not explain quickly enough that the machine, launched yesterday, is only available in Japan and Germany with no plans to launch them anywhere else. I asked about IP issues, he said he did not understand what I was asking, but did I know about the three USPs this machine was bringing to the industry. I politely, maybe a little skeptically, asked him to tell me what they were, he quoted (and showed me) the resolution which I said was pretty good, but standard for a multijet process and not unique. He then moved onto the “melting material”, which I did eventually understand him to mean the dissolvable support material. Lost in translation so I let that pass. The third, and I have to quote it precisely because you just couldn’t make it up: “it sits right next to your desk.” I don’t think I hid my incredulity very well before blurting out: “but that is hardly a USP.” Him: “I believe it is.” I gave up — not knowing whether to laugh or cry!

I got straight back into my comfort zone — which is somewhat closer to sanity — because it was time for my postponed interview with voxeljet’s CEO, Ingo Ederer. We talked past, present and future; again, full interview to follow.

Straight into the next one, with Stefan Ritt of SLM Solutions. This one turned out to be much more informal. I got the background story to the 3D printed Rover Asimov R3C. This is a privately funded project sending a vehicle to the moon at the end of next year. This little fella arrived at the show JIT, and is the actual model heading for lunar greatness next year, Stefan told me. I really thought he was messing with me at first, apparently not! Really cool. As are the other applications the team is working on, including electric car parts among others. 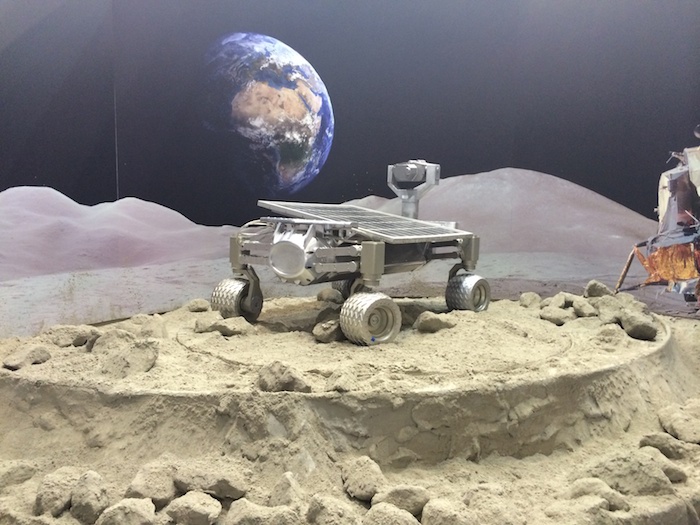 Also got to see first hand the new Concept Laser developments that Davide got a preview of earlier in the year and knew was coming. Impressive looking machine and some nice parts coming off it. Ended up chatting to a couple of engineers later in the day that were really impressed too having had some parts produced and were looking at it seriously in terms of bringing it in house for series production. I asked if I could quote them they said yes but only if anonymously! Not a huge shock, but would have been a nice name to drop! This was another recurring theme — from the metal vendors and people talking to the metal vendors — applying additive metal tech to production facilities. It’s not that people don’t get it anymore, very few people are at Euromold to find out what, they are there to find out how.

I also spent more than an hour being shown around the big 3D Systems stand with Cathy Lewis and other personnel at various points. More insight on the beast (ProX 400) from Kevin McAlea, with the tyre moulds (or tire molds!) being an application highlight. It is heading into beta testing, but looks impressive as an automated metal platform. Cathy took me to a second stand just across the aisle that was dedicated to the new 3DSprint platform (or ecosystem). It’s a cloud based system and I had a 20 minute demo that I can’t detail with justice here. I like what they’re doing though — seems well thought out.

I also managed to grab a seat for a little while with Raphael Gorge, President of Prodways. Reflective of other conversations during the day in terms of the challenges and rewards of managing rapid growth, this is the company that stuck its head above the parapet this time last year, but has ramped up considerably since then with the alternative, large scale DLP process and scaled up in a measured, yet still impressive way. Global resellers are now emerging too, and it was great to bump into Rory Jackson, of RP Support on the Prodways stand. As of yesterday RP Support is a channel partner for Prodways in the UK. 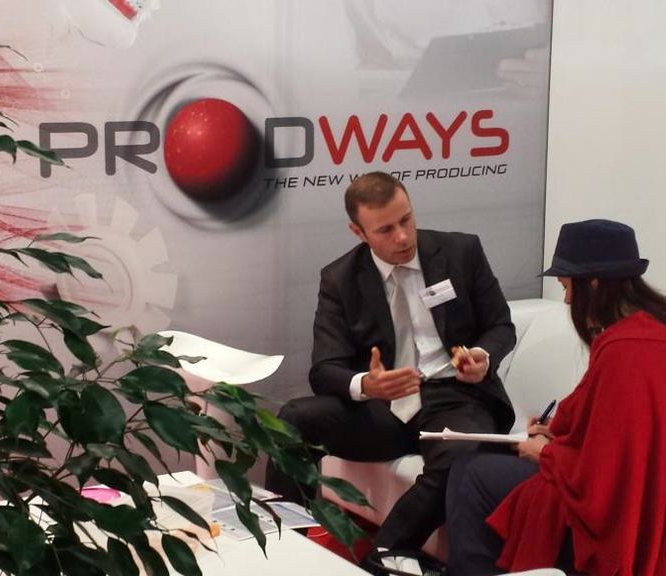 Wonderful to spend quality time with Kerry Stevens of Fabbaloo along with Marnie. Comparing notes and a bit of gossip never hurt anyone, right? Similarly Jochen Hanselmann. Bless him, I think I nearly drove him to distraction with my manic ramblings, as I bumped into him just after I came back from my trip off site. Apologies JH!

One more half day tomorrow at the show, specifically for the 16th edition of the Wohlers Conference, which industry consultant and 3D printing veteran Terry Wohlers hosts annually at Euromold, before I have to head back to Blighty ….. and start those transcriptions!! L

I have not stopped talking for the last 2 days but my biggest regret is not managing to carve out time to speak to some of the many other smaller companies at Euromold. Davide arrives tomorrow and I’m hoping he will help me out with that – the plan being he’ll pick up where I have to leave off.