EnvisionTEC, a manufacturer and distributor of patented 3D printers and manufacturing solutions, has unveiled the newest addition to its dental systems. 3Dent™ has been specifically developed for the manufacture of dental models and has been unveiled this week at LMT Lab Day in Chicago. 3Dent™ provides a 279 x 184 x 76 mm build envelope with 25 micronsresolution. The 3Dent system has been optimized to be used with EnvisionTEC’s E-Denstone material for creating superior quality dental models. This is a nice addition to EnvisionTEC’s already impressive portfolio that includes 3D printers and photosensitive resins, to be used in dental applications such as wax-ups, drill guides, temporaries, models, partials and orthodontics.

The build speed for 3Dent™ is up to 10 mm per hour for the full build envelope, making the build speed 2x faster than competing products. The 3Dent™ user interface is simple and has a built-in touch screen. It is believed that the 3Dent™ will be a great addition to any dental lab wanting to upgrade their workflow to digital. 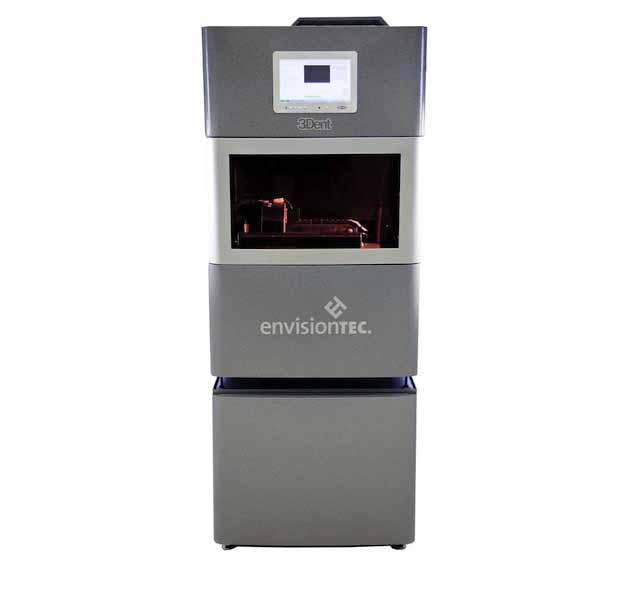 Since its first patent submission in 1999, EnvisionTEC has developed and released a broad array of solutions supporting the individual engineering desktop as well as large-scale enterprises and manufacturers.  EnvisionTEC provides organizations of any size the capability to rapidly manufacture true-to-life and functional duplications of any CAD rendering with 3D representation that is unmatched in the industry.  With nearly 100 patents, EnvisionTEC enjoyas a strong customer and partner base in jewelry, dental, medical, biofabrication, animation, toys, sporting goods and consumer packaged goods.