The pioneers of 3D printed upper limb prosthetics, e-NABLE, is lighting up a promising path for assistive devices once again, this time with actual lights! One of the estimated 1,700 members of the non-profit’s “global village”, Debbie Leung, has just created the Cosmogony, a prosthetic device that’s transformed into a platform for her space game, “Expand Your Universe”. Equipped with RGB LED light capabilities, the Cosmogony is an assistive device inspired and improved upon from her previous e-NABLE project, the Light Show Hand. 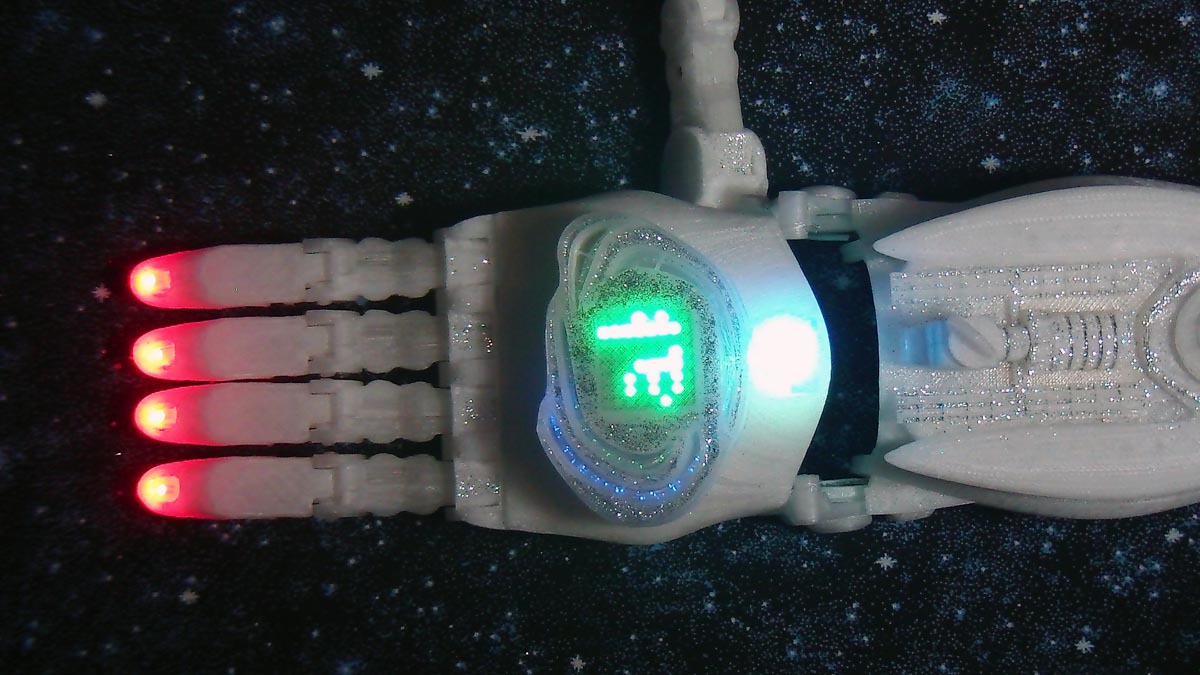 Leung, an electrical engineer, became interested in utilizing additive manufacturing after attending an “Inside 3D Printing” conference, but it was e-NABLE that showed her the medical benefits that 3D printing could offer assistive prosthetic technology. Originating with her experience in microelectronics and circuit analyzation, Leung decided to throw in 3D printing to create this entertaining gaming device. The Cosmogony is certainly a fun addition to the devices made by e-NABLE members, with color-shifting LED lights leading us on an adventure into the unknown confines of space! 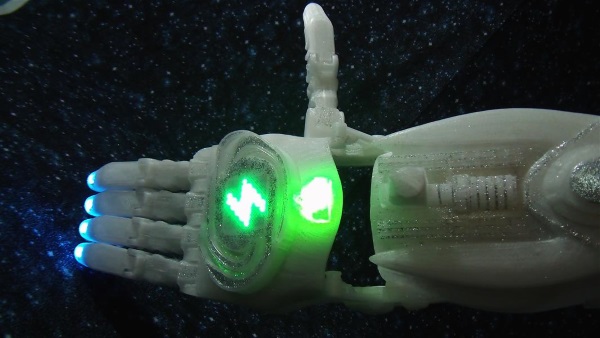 The Cosmogony prosthetic gaming hand is composed of a 3D printed physical prosthetic hand design, Adruino programs that run the RBG LEDs, and the various electronics (LEDs, resistors, switch, etc) that actually create the colorful light action. RGB LEDs display a repeated light sequence of red, yellow, green, blue, magenta, cyan and white, creating a imaginative light show while the game is in progress. The game itself (displayed in the video below) is a colorful adventure into an imagined outer space, the object is to avoid colliding with tiny oncoming LED asteroids heading toward the palm of the hand (where the planets you must protect are situated) by physically moving the attached Cosmogony from side to side, which is sensed by the prosthetic device’s accelerometer. The game, which gets more difficult as the stages progress, is completed once you reach the edge of the ‘universe’, where you then have the power to start an entire new universe to repeat play in.

These imaginative and entertaining gaming functions can help turn prosthetically modeled devices into a platform for physically stimulating gaming. The Cosmogony offers us a glimpse into a future where prosthetics are both useful to use and fun to have. E-NABLE and their collective have yet again helped to influence a bright mind to use her fixation with 3D printing technology to benefit the field of prosthetics. The medical benefits are certainly evident when it comes to 3D printing and prosthetic technology, but who’s to say these assistive devices can’t be used for a good time, too? Leung is making it possible for kids (and even easily amused adults) who are in need of these 3D printed assistive hand devices a chance to enjoy them as well.