An increasing number of designers and online service companies are seeing the potential of making unique jewellery and utilizing the latest 3D printers to create them. Yvonne van Zummeren, Netherlands based designer and owner of Dyvsign is one such entrepreneur operating in this market. Dyvsign is selling its own impressive collection of jewellery designed by van Zummeren, as well as allowing clients to customise their own bespoke designs according to their personal tastes. 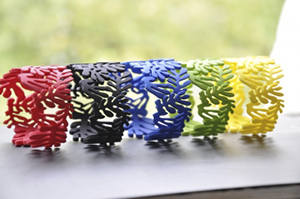 One of van Zummeren’s eye-catching designs is called “La Gerbe”, which was inspired by the French artist Henri Matisse, who used the technique of cutting out organic forms using coloured paper and laying them in such a way to form a vivid composition. Matisse used this technique in his work called “La Gerbe” in 1953 prior to his death as well as in his earlier work when he was designing the ‘Chapelle du Saint-Marie Rosaire’ in the city of Vence in southern France.

The La Gerbe 3D printed bracelet is inspired using this cut out technique from Matisse and shows the recognizable cut leaves and the vivid style in which they are positioned. The designs are made from nylon polyamide and are available in multiple colours. 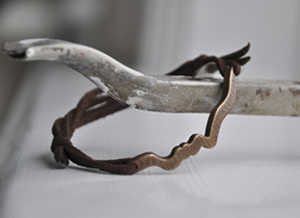 Dyvsign produces jewellery in a range of materials; as well as nylon polyamide this talented designer also works with (guilded) stainless steel, ceramics and others depending on the design. The work of Dyvsign is currently being showcased at the XYZ Shaping Free Dimensions Exposition that we reported on last week and will be there through until 6th June.  The design collection will also be on show at several other up and coming 3D printing shows in Europe later this year for which you can see the agenda on the Dyvsign website.