DYNAMO3D Brings Ultra Fast Evo 3D Printer to the US

A new partnership has formed to bring to the US market a desktop 3D printer that its manufacturer believes is faster than all others on the market. Designed by Italian 3D printing manufacturer DYNAMO3D, the D3D Evo is said to achieve print speeds of up to 450 mm/s and traveling speeds of 700 mm/s. Now, the D3D Evo is coming to the US through 3D printer retailer DesignBox3D. 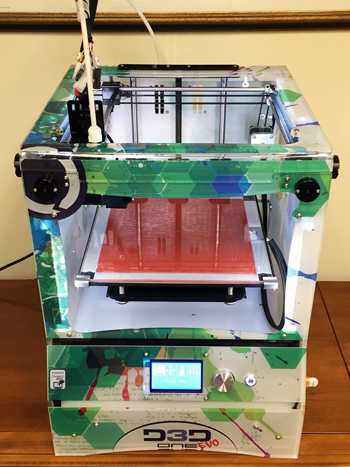 As stated in previous coverage on 3DPI, the D3D Evo relies on technology from Create It Real, a Danish company that develops 3D printers and 3D printing accessories.  Creat It Real engineers implement Real Vision software and their own control board, using their 3D RTP v450 chip, to drive the D3D Evo up to the aforementioned speeds.  Now, by joining forces, Create It Real, DYNAMO3D, and DesignBox3D, will be bringing the D3D Evo to the US.

I asked Preet Jesrani, President of DesignBox3D, to elucidate further on the features of the D3D Evo.  Preet explains that, with a build plate capable of reaching 160 degrees and a build volume of 240x240x250mm, the machine can print layer thicknesses as fine as 0.03 to 0.02mm (20 – 30 microns) at slower speeds and .05mm (50 microns) at higher speeds. The Evo is also pre-wired for a second extruder, in case customers are interested in an upgrade, and a Remote Diagnostic System, which allows customers to send to the DYNAMO3D technical support team.  According to the partners, the Evo has been tested with a range of filaments, including: “ColorFabb PLA, XT, Bronzefill, Copperfill, Brassfill, Protopasta Carbonfiber PLA, ABS and more.” You can watch the Evo in action below, compared with DYNAMO’s first 3D printer, the D3D.One:

DYNAMO3D is surely capable of looking nice, but what about those speeds? In a previous article on Creat It Real’s 3D RTP v450 chip, many readers chimed in with their opinions of the stated speed possible with the chip.  Richard “RichRap” Horne believed that other boards could aid printers in attaining 450 mm/s, saying, “The [Replicator 2] is slow so it’s not hard at all to go 2x or 4x as fast with the electronics we have now and faster open-source ARM based electronics also being released now.” Tom Bielecki, of PrintToPeer, added, “450mm/s is doable on normal 3D printers with the 2560 Atmel chip, but most aren’t solid enough to handle those speeds. The limitation isn’t the electronics.”

Preet tells me that it is the strong frame, in part that contributes to the Evo’s ability to print so quickly, saying, “It is indeed the frame and the parts quality and how well they are made that makes a tremendous difference. What is interesting to me is that those that say any ARM board could get to those speeds do not seem to have launched a fast machine :)”
The DesignBox3D President adds, “And, yes, the prints are precise because there is no frame-shake and vibration – it’s built for speed.”

Some may be saying, “I’ll see it when I believe it!”  Luckily,  anyone attending 3DPrintShow NYC or Pasadena will get to see it in person this April and September.  DesignBox3D (DYNAMO3D Americas), which will also be selling DYNAMO’s original D3D.One, is also ready to start shipping evaluation units to potential distribution partners and resellers.  Personally, I’d like to get my hands one myself and take the Evo out for a test drive.  If you’re interested in doing the same, you can contact the partners through any of the following channels: