First of all, they will heretofore be referred to as “underwear”, so as not to elicit chuckles out of our readers from Lambda Lambda Lambda.  Tamar Giloh, in attempting to solve the problem of heavy menstrual flow suffered by women globally, sought to develop a method for quickly manufacturing biodegradable underwear. After the project’s inception in 2001, Giloh and her husband have come up with a unique method of fabric printing that has garnered the couple’s company, Tamicare, with over $10 million in investments. 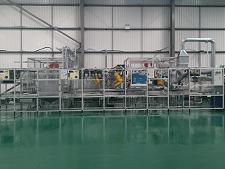 The prize jewel at the centre of the Tamicare company is its proprietary production line machinery, which sprays fibres and polymers in a computerized manner to create stretchable, biodegradable fabric. The process can print fabric products made from a number of “liquid polymers such as natural latex, silicone, polyurethane and teflon, as well as variety of textile fibres such as cotton, viscose and polyamide.” The claim is that they are instantly creating finished products from raw materials and can offer mass production or on-demand production that will cater to immediate local needs. There are not many manufacturing applications with 3D printing that can claim high volumes, so this would be a major boon.

In terms of comparisons with traditional underwear production, an added benefit is that this process requires no cutting and therefore produces no waste.

Renowned industry consultant, Terry Wohlers is quoted as saying: “this is an unusual application and certainly a first in the world of 3D printing,” in response to Tamicare’s manufacturing process. 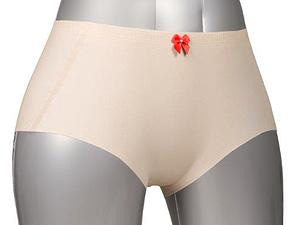 The company’s flagship garment is the Cosyflex line of disposable underwear.  The underwear features a menstrual pad folded into its lining, is extremely flexible, and can be produced in a variety of colours. According to Giloh, the Cosyflex “is like [underwear] with a pad in it, but it isn’t anything like the Kimberly Clark pull-up.” At the moment, the disposable underwear is not yet commercially available, but will begin selling in the couple’s native Israel soon. If successful, Cosyflex could mean a comfortable, less awkward solution for heavy periods that doesn’t mean discarding prized pairs of underwear.

The printing process has potentially profound implications for the design of clothing, bandages and sportswear, among other things.  Not only does fabric printing limit the amount of waste created in the manufacture of clothing, but, if perfected, the printing of fabric could lead to innovative design and automated production of clothing as well.  Giloh tells Bloomberg that Tamicare is in talks with a large US company to sell Cosyflex in the United States and that their compression bandages will be sold by a British company in the near future.