There has been an interesting escalation in development around specific search engines for 3D content online this year. It is really a natural progression from the steep increase in the number of 3D content sites — from the well established such as GrabCAD and Thingiverse as well as the groundswell of start-ups in this area, many of which we have covered on 3DPI as they have announced their arrival.

It still seems a little early to me in that the established few repositories are still few enough to search individually by those in the know, but a useful tool nonetheless for anyone looking for 3D printable content that does not want to trawl individual sites.

The most notable developments include:

A basic 3D Print Search option is available via the DIMENSIONEXT website, which has indexed the two big sites mentioned above together with some other smaller sites. According to the host, it is a work in progress and will continue to be developed.  It is a standard search engine that is controlled by the search parameters of the user. 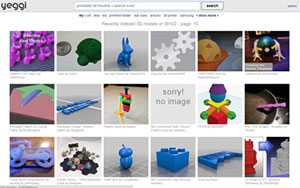 The latest 3D search engine comes from yeggi, which has gone live in the last few days. Already with 39, 192 models available from an index of seven sites to date, this search engine is hosted by Sebastian Karpp based in Germany. The site offers a search based on keywords, but also displays the most recently updated files that are available together with their original source.

FABforall is another 3D search engine currently in Beta that is also a ‘3D printing network’ allowing members (FoC) and non-members to find the latest 3DP sites, files, objects, materials, printers and designers. There are options for members to comment and rate sites via FABforall also.

These sites are all benign even though they are not in full swing yet; they are almost certain to grow in terms of offering and stature within the 3D printing community as 3D printers become more and more prolific.

The same benign label can’t really be applied to the next one, although how successful it will be remains to be seen. 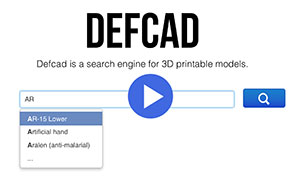 Affiliated with Defense Distributed — the controversial organization that is on a mission to produce the world’s first fully working, fully 3D printed firearm — DEFCAD made known a second mission back in March to develop and launch its own open source search engine for 3D printable models of every conceivable type (ie it will include firearm designs but will not be limited to them), with the aim of eliminating censorship within the 3D printing industry.

The organization is hosting a makeshift repository of ‘censored’ 3D printable parts at DEFCAD.org and is currently seeking funding to develop the search engine at DEFCAD.com, but with just nine days left on the funding campaign they are only just over 50% of the $100k target. Indeed, DEFCAD specifically cites within it campaign its dedicated aim of “disrupting copyright, IP and regulation,” for 3D printing in a similar way to how Napster and the Pirate Bay changed policies around music and video distribution; claiming that: “It is about printing items whose prices have been set to infinity. It is about disrupting man-made forms of artificial scarcity.” Personally, I can sympathise with the belief that stiff regulations and copyright laws are open to abuse by the greedy and the powerful. In fact it is hard to deny, BUT, regulations in particular impose safety standards too that are vital for all of the specific areas that DEFCAD reference, namely firearms, pharmaceuticals, automobiles, drones and medical devices. Any and all of these surely demand regulation in a way that music and videos do not because they require specific training and knowledge to produce them safely. One can’t help but wonder if the lack of funding to date is a key indicator that while many people buy into the rhetoric of eliminating censorship, self-preservation kicks in at the most basic level when considering the real consequences of doing it.