Any 3D printer is a manufacturing robot, but no 3D printer, no matter what the technology involved, looks more like bot than those made using delta architecture. The first delta 3D printer I have had the opportunity to test and play with for while is the DeltaWASP 20×40, manufactured by Imola, Bologna-based WASP.

This is the company whose founder, Massimo Moretti, has been working on a gigantic, 12-meter delta 3D printer capable of building small, clay, inhabitable structures. And, apparently, all of the challenges he faced, while tackling this extra large project, have paid off in the smaller deltas machines produced by WASP: both because selling the smaller machines is how he is financing his dream and because the DeltaWASP 2040 really makes 3D printing smaller objects seem as easy as child’s play.

The numbers in the printer’s name represent the size of its build volume: a cylinder with a 20 cm diameter and 40 cm height. I have to admit I did not test the full potential of this machine, but ever since I have gone to pick it up at WASP’s factory, it has been 3D printing practically non-stop.  And, apart from some errors in the automatic support settings of Cura and some difficulties 3D printing larger parts in flexible filament, it has never given me any problems.

Since I took this opportunity to organize a 3D Print Party and show it off at an art bar owned by friends near where I live in Milan, I designed and 3D printed about fifty keychains in many colors, materials, and sizes. I primarily used the colored PLA and rubber filaments supplied by Plastink, as well as the excellent wooden filament my friend Simone Fontana (from YouTube Tech channel FNTSMN) bought from Fillamentum. We also experimented with some generic ABS. 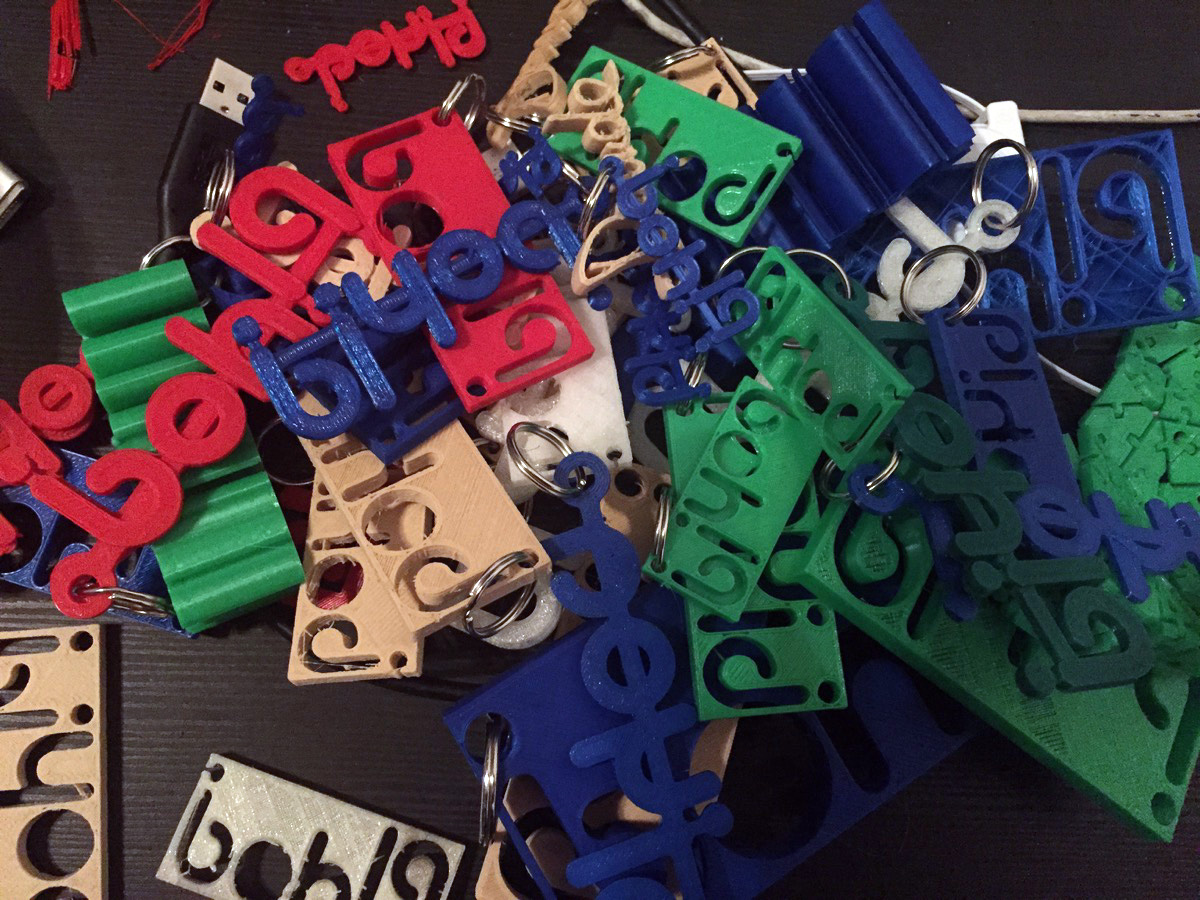 In addition to the keychains, I used the printer for a lot of personal projects, since I have been remodeling my house over this winter break. Knowing that the 3D printer would be able to make just about anything I could design and download, I played around with Autodesk’s Tinkercad and Shapeshifter, discovering that basic 3D design can be a lot more intuitive than I had imagined. 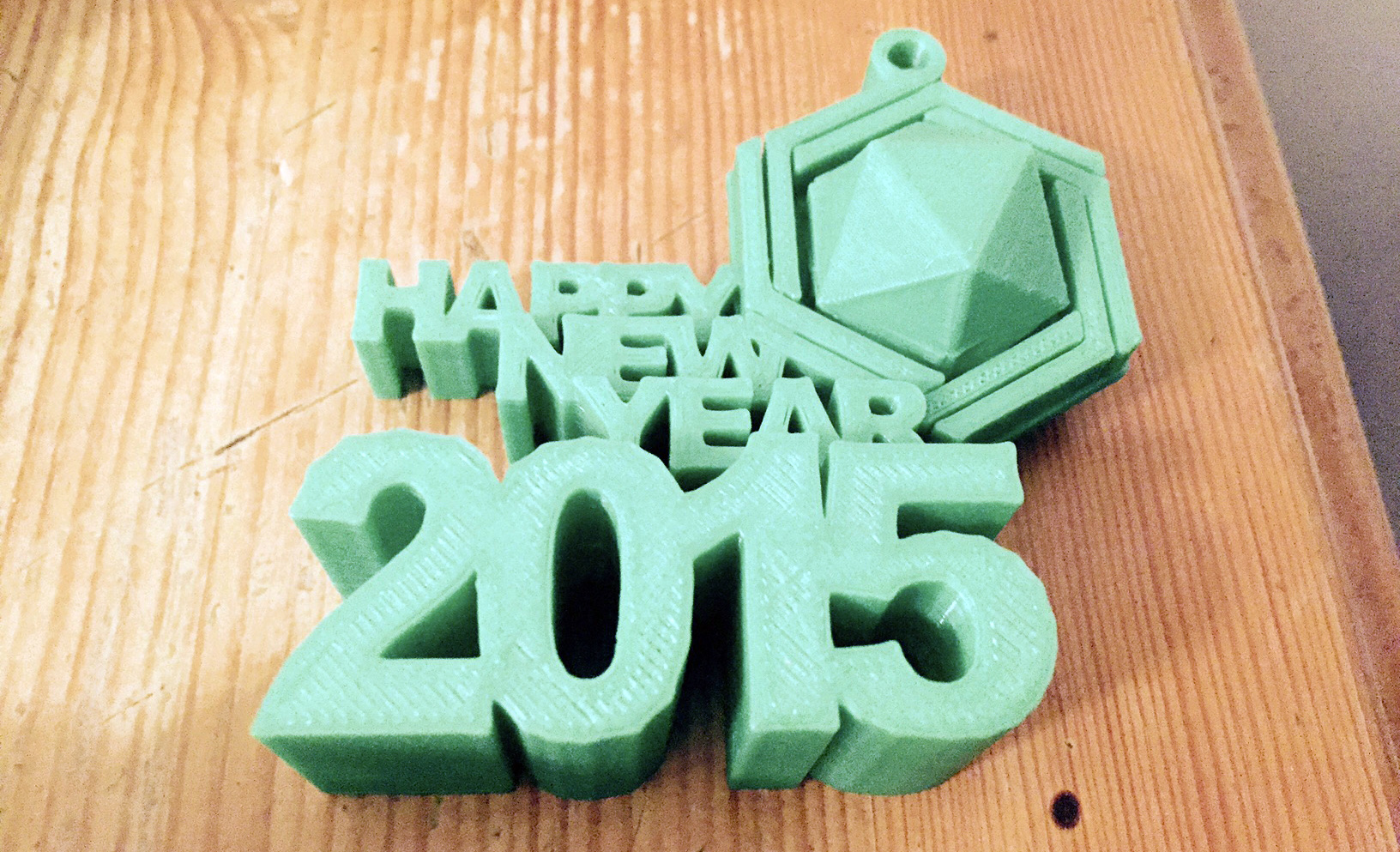 Getting back to the 3D printer, one immediately striking quality of the DeltaWASP (and other delta 3D printer manufacturers confirmed this) is the elegance of its design. The plate basically sits directly on the floor, giving it more stability. It can be heated up to 100° C and regulated easily with three side wheels. And the plexiglass enclosed printing space assures improved temperature control. 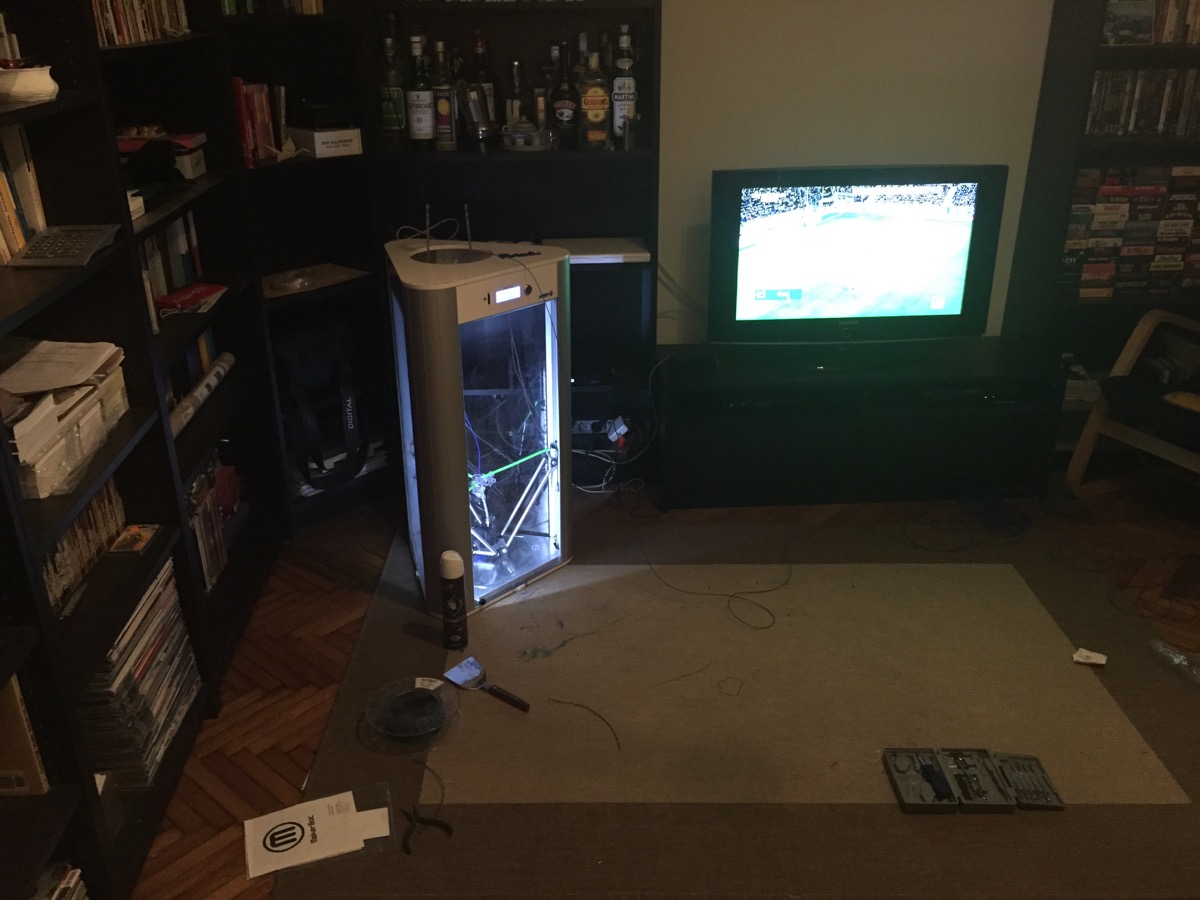 Curiously enough, the oddest looking DeltaWASP feature was the filament pull motor that literally hung over the extruder, held in place by three green, elastic strings.  This also that which contributes the most to the quality of the output. Paradoxical as it may be, the more the motor is free to dance around, the less its vibrations are transmitted to the extruder. One more example of quality Italian craftsmanship.

The machine’s body is aluminum and polycarbonate, with a glass plate. It has a relatively light weight of 20 Kg, which means that it is not too hard to move it around. WASP’s delta print head is very precise and it has gotten better over the past couple of years. Even at a layer thickness of 200 microns, the vertical surfaces appeared almost perfectly smooth and errors were extremely rare in everything I printed. I mainly used Cura for slicing and downloaded all of the software settings right from the downloads page on WASP’s website.

I put it to the test with Nervous Systems’ iconic bracelet, which I printed at 100 micron, and also with a a few other test models, including the Bhold iPad amplifier, which I 3D printed in Timberfill for – I figured – better acoustics. Finally, I used it to 3D print a “dog”, on commission for a contest on my Italian 3Discover.it website. 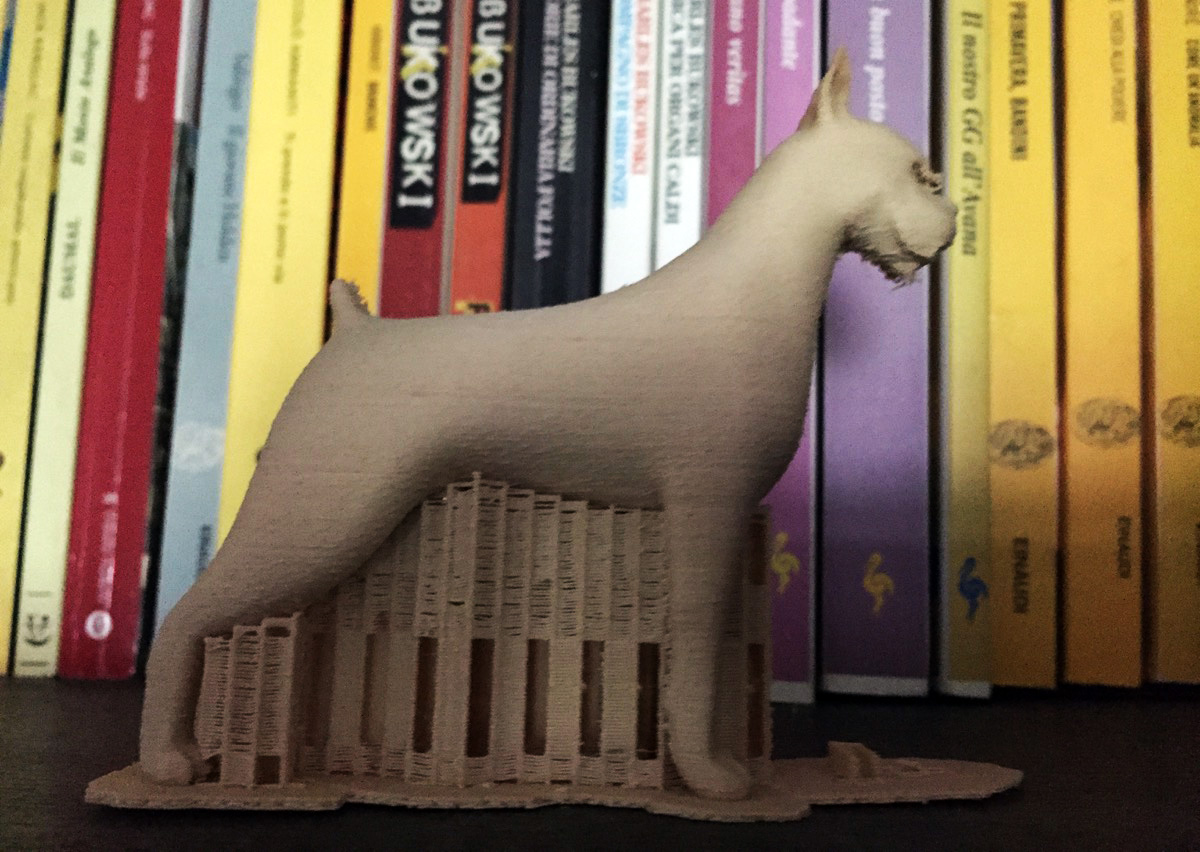 What is impressive about the DeltaWASP, I think, is how easy it is to use. The on-board computer, with single-color LCD display, is pretty much the same as that of any other open source 3D printer and, yet, the firmware has been optimized and is regularly updated. In fact, the latest update introduced the very useful Resurrection feature. I did not realize how useful this was, until I turned on the dryer and oven together while the DeltaWASP was about halfway through the 2.5 hour Bhold amplifier. All I had to do – after switching the lifesavers back on – was just find the “Resurrection” file on the SD Card and hit start. The printing picked back up exactly from where I left off.

The DeltaWASP is a typical example of Italian artisan craftsmanship applied to 3D printing. Although the attention to detail, care, and passion that every member of the WASP team puts into their work is clear, the assembly process is not industrialized and is not easy to scale up. This means that what you get is a product literally custom made with dedication and, as such, might perfectly cater to your needs. Nothing too fancy yet, just everything you need, where you need it, put together in a thoughtful manner. 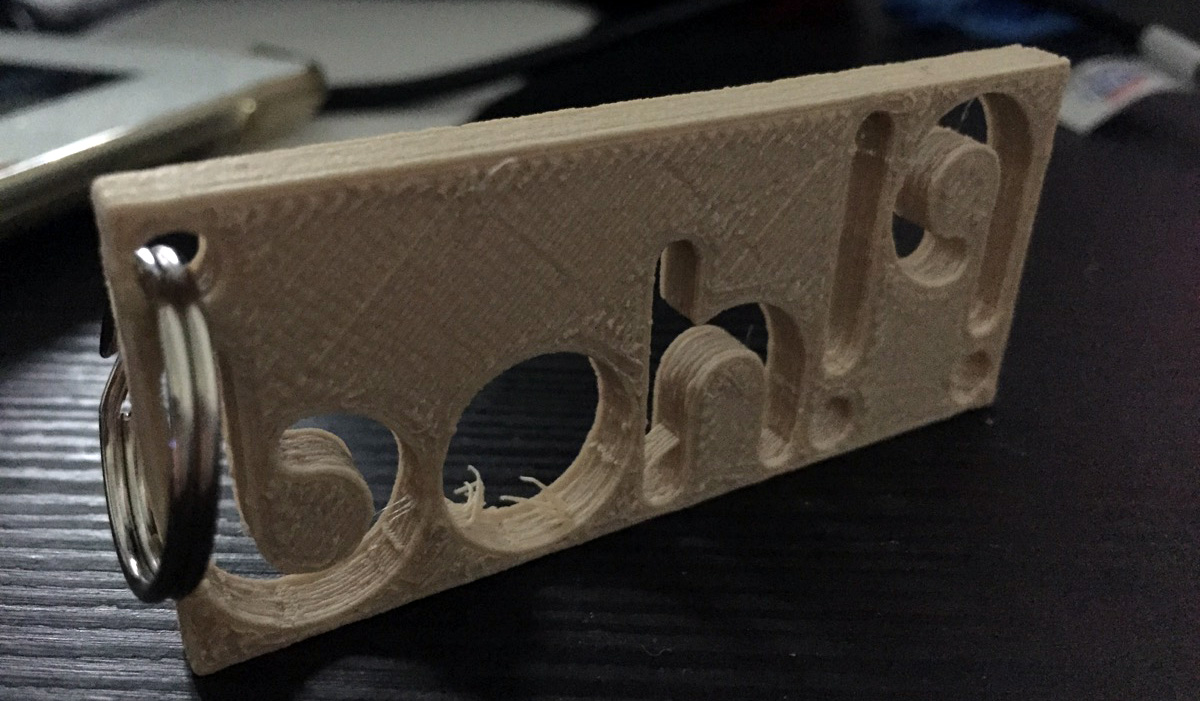 What the company’s neighboring Ducati and Ferrari did with cars, WASP is trying to do with 3D printing technologies. Although the price (€2.300 + VAT) is currently aligned with that of other delta-style 3D printers, this maniacal attention to detail means that, in the long run you, you might pay more per machine, in comparison to mass produced products. Even in the age of manufacturing and possibly even self replicating robots, there are some things that humans will just always do best. Ironically enough, consistent, standardized mechanical performance is just one of those things for WASP.