Da Vinci, renaissance man. From new painting materials to mirror writing to helicopters to parachutes to planes to submarines to… you name it, this profound genius could produce a strong attempt at a solution 500 years ahead of his time. 3D printers also have a knack for producing a vast array of futuristic seeming output. Now, the da Vinci 3D Printer may give you a Mona Lisa smile for its beauty and innovation…

XYZprinting, the developer and manufactuers of this 3D printer, says that: ‘The da Vinci 1.0 3D Printer will revolutionise the way you live. da Vinci allows you to create and customise your home with the push of a button.’

Promises, promises. The modern consumer, accustomed to a daily barrage of products and services from advertising everywhere — from the sides of buses to the sides of buildings, their shopping bags and their glossy mags — is a refined cynic, honed at parting the wheat from the chaff. It takes a lot to impress adults accustomed to the endless promises that Product X is going to make them happy and Produce Y defines them.

However, this little beauty of a printer certainly has the looks to grab our attention — but is fighting in a growing crowd.

Once she has our attention we feel may inclined to dote upon her for a while. Then we ask ourselves: ‘She may be beautiful, but is there any substance behind that smile?’ Let’s have a look at that substance, before we get to the absolutely stunning price of this 3D printer.

A host of refined, attractive looking 3D printers are emerging at the moment. Ion Core’s Zinter glows with radiance. The BeeTheFirst holds our gaze with the use of externals coyly accentuating her curves. My beloved Rapide One and Radipe S are a duo of temptresses that enamour my thoughts beyond rationality. And many more besides. So, what is the da Vinci going to do to stand out of the crowd of pretty young things?

A) Easy to install printing filament.

XYZprinting says that its filament has been designed to be easy to install and replace, including on-board notifications when the filament is running low. There are a number of other easy-to-install cartridges such as corporate monolith 3D Systems’ Cube and even the promise of such in full colour by the bewildering BotObjects, which has unfortunately earned cynicism for the many no-shows with a working version of it proposed ‘full-colour’ plastic 3D printer. But here, judging by images, a genuinely robust system appears to be ready for use. 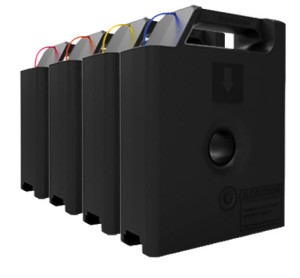 I’ll look forward to finding users of this system to update readers on the reliability when the printer has had more time in the marketplace to pick up purchasers, as the da Vinci 1.0 has yet to be released en mass. It will be displayed in Kinpo / Vibo Telecom stores in Taiwan shortly. XYZprinting will begin the delivery of domestic pre-orders for more than 1,000 “da Vinci” units on Dec. 24, 2013. The company will ship to China in January, Japan and the US in February, and the EU in March, according to chairman Simon Shen.

B) A cloud based input system.

XYZ Cloud is designed to find a design or upload an .stl, G Code or XYZ file of your intended output. A drag and drop control panel allows the users to drop files right onto the virtual build space. Then, XYZprinting says the design can be used to scale, move or rotate individual models or groups of models at once. After choosing your design, material and colour the system then prints. Simple.

What I’m gong to take this as being, as I have not yet had a chance to chat with the company, is a reference to motion in the Z axis. I cannot find clarification on this however but I’ll list it here as a feature until more news may emerge.

In summary, the da Vinci has the looks and ease of use potential for moderate traction in the broader market. Whilst cynics abound as to whether the home 3D printer market will ever ‘take off,’ I see this as little more than primary variables of healthy consumer cynicism in a culture constantly barraging people with ‘must buys’ and unhealthy overly-empirical thinking.

Trend extrapolation points to continuing growth, and the endless comments sections of mass media publications that I have read daily for a few years now points to a lot of people waiting for a wider range of materials (albeit because most, busy, none-specialist journalists are completely unaware of the breadth of materials that already exist) and larger build areas.

This leads me to my final point, that the build area is 20 x 20 x 20 cm (7.8 x 7.8 x 7.8 inches). Whilst this is okay for what I call ‘repairables,’ prints to replace broken parts on your household objects, and a reasonable range of extant final products, it is unlikely to fulfil XYZprinter’s stated aim of selling 100,000 units.

Ultimately, the da Vinci 3D printer does have the makings of making makers consider making her part of their home making machine collection, especially given the price, an astonishingly low USD$500.

Those specifications in full: 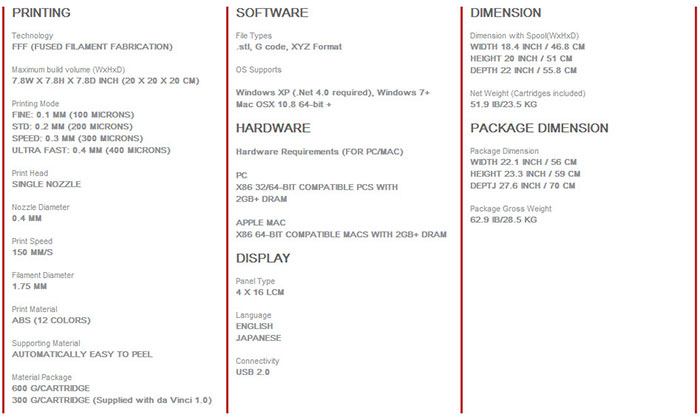