A team from the Laboratory for Additive Manufacturing and Logistics at NC State University were contacted recently, with a fairly unique request and a new application for their 3D printing know-how. They were asked about 3D printing a custom brace for a seriously injured green sea turtle. Now injured animals are, unfortunately, a common enough occurrence, and 3D printing is gaining a growing reputation for solving problems where there are few, if any, other answers. And putting the two together has been done before too. Remember Buttercup? But, each and every time one of these stories emerge it warms the heart a little more, brings a smile and just makes things a tiny bit better. 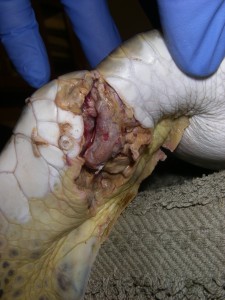 The sea turtle in question, with an uncanny resemblance to Squirt, was suffering from a severe open fracture to the right radius and ulna with a large wound on the ventral aspect. The fracture was continuous with partially healed lacerations of the skin. The poor little thing had been found by members of the public off Carrot Island and turned over to the Coast Guard.

It was severe, but on the upside, the entire flipper appeared to have viable blood flow and nervous function, which meant that there was a good chance of saving it — the flipper and the turtle. According to the team at NCSU: “surgical stabilization of the fractures may have be an option but traditional reduction did not appear to be a practical solution, so we accepted this challenge as a unique opportunity to apply additive manufacturing techniques due to the irregular shape of the flipper as well as the urgent nature of the case. We received CT scans of the turtle, which included both the broken and intact front flippers.” 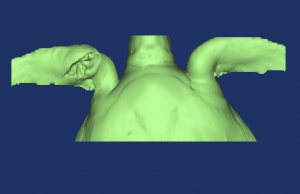 The process was not entirely straightforward, however, due to the distorted geometry of the injured flipper, which prevented the team from directly designing the brace. Therefore, initially the team attempted to design the brace based on the opposite intact limb, which had been scanned, and from the scan data they created a 3D digital model and 3D printed prototypes on their in-house Stratasys Connex 3D printing machine. This methodology proved ineffective however.

The team then went back to the original CT scan and stl model, which they loaded into a software called Clay tools, which uses a haptic interface and allowed them to “feel” the stl model in the computer. This meant that they were able to virtually reduce the fracture on the model of the injured leg and repair the anatomic distortions present in the scan and therefore build a much more accurate and refined brace for the actual injured leg. And,  as the team relay: “rather than design a complex latching system, the rear connection is designed to be sutured together making it relatively easy to don and doff with readily available resources.”

A couple of iterations later and a brace was 3D printed that was perfectly customized to meet the needs of the ‘patient’ who is reportedly doing very well — swimming and eating!