After successfully completing two campaigns on Indiegogo for its ultra-low cost photopolymer-based 3D printers, Lumi Industries is now going for a third round, this time on Kickstarter, to launch the new version of its LumiPocket, with additional PCB etching and laser engraving capabilities.

It is curious that the Lumi Industries’ campaign announcement comes more or less at the same time as the FABtotum’s new SLA add-on, also on Kickstarter. Both companies are based in Italy – although they are very much focused on international markets – and it seems that the engineering behind affordable 3D printing in general is coming to the realization that the mechanics for all digitally-based manufacturing are quite similar, and that the same UV laser can be used for several different purposes. 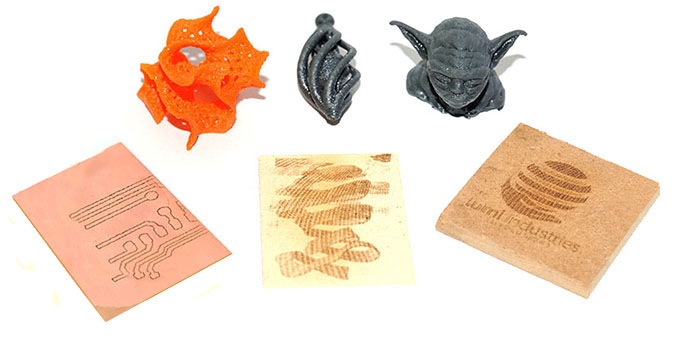 The new LumiPocker LT, SCARA-based 3D printer can use its particular robotic arm to UV cure resin and create objects with up to 50 micron Z-axis resolution, optimizing the build volume. It can also use it to etch a standard (pass-through) PCB, which is then ready to be developed. Finally, with its integrated 200 mV UV laser, it can work as a laser engraver to create business cards, QR codes, coasters, and more on materials such as wood, expanded PVC, heavy cardboard and even leather.

The LumiPocket is already an extremely versatile machine, weighing less than 2 kg and 3D printing with proprietary LumiReact resins as well as SpotA, MakerJuice, FunToDo, 3D Materials and Bukytown Polymers UV pigmented resins. Current users can choose to back this campaign by selecting the $299 LumiPocket upgrade package, in order to receive a full conversion kit, or purchase the full product for little more. 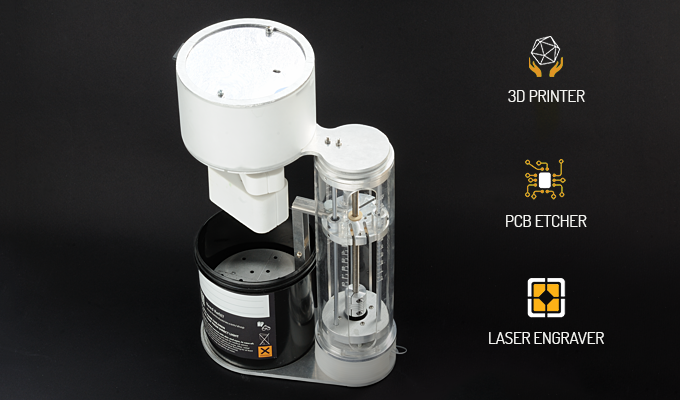 The first Super Early Bird full support package started at just $399; however all 15 are already gone. The next level up is $499, with the final retail price expected to be in the order of $750. Deliveries are scheduled to begin next February and Lumi Industries has, thus far, always followed through with its previous crowd-funding promises.

Although they are based in Italy, I have not yet had the chance to meet the Lumi team personally. Davide Marin is the company’s current CEO and R&D coordinator. He co-founded Lumi Industries together with Manuela Pipino, coming out of the H-Farm Ventures incubator. Their market reach was initially limited but it is continuing to grow and they have now built significant experience with accessible laser and photopolymer based technologies, as with crowd-funding. These are assets that are going to become even more valuable in the years to come.