Them Crazy (Japanese) Cowboys Have Gone and Done It Again

Why do we — as a global society — have such a morbid fascination with guns? It is not only about shooting them, that is just a part of it that we leave to hunters, soldiers, criminals (and a few too many Americans), but we just love to talk about them, especially in the media, too. Now there is another one to talk about — the Zig Zag revolver — and it’s a six shooter but, seriously, it is not the only, nor the prettiest, nor the most complex thing you can make with a 3D printer. 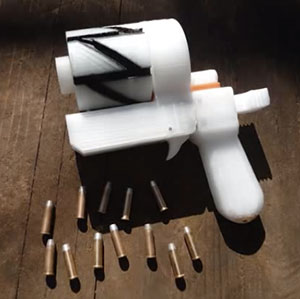 The Zig Zag revolver is, however, one more project that pushes the boundaries of what can be done with 3D printing, as it is the first time a firearm 3D printed in plastic shoots more than one shot. As ugly as it may be, it does seem fairly reliable as demonstrated in the video (below) where it is shot over and over without failing. In this test it only used blanks, so as not to violate Japanese law, its country of origin.

What, in fact, does seem a little more worrisome than the gun itself is that, while Defense Distributed (makers of the first fully working .380 single shot pistol) has been growing quite a bit and turning into a “defender of the right of citizens to defend themselves,” 3D printed weapons databases seem to be popping up around the globe. The Zig Zag revolver test was first published on Kemuridama.com, a Japanese database of all 3D printed weapons. Are there really that many 3D printed guns around that we need a database? And most importantly, do they predict that there will be? 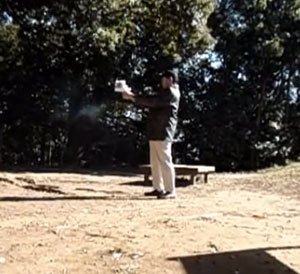 In a way guns are the exact opposite of 3D printing: one creates and the other destroys. Thus, although I am fascinated by guns, I do believe that there are more important things that the media and 3D printing in general should be concentrating on.

Doctors have been 3D printing models for life-saving surgeries for years, industries have been cutting costs and material waste through additive manufacturing since the early 90’s but you know what made the mainstream news on its very first shot (and miss, by the way): you guessed it. A 3D printed gun. The 3D printed gun from Defense Distributed’s Cody Wilson to be precise, and it was not even the Liberator, which went on to get even more headlines, but just the lower receiver of an otherwise standard .22 semiautomatic.

While most 3D printing projects back then had to work really hard to garner coverage in mainstream media, when the Liberator came out, it got so much press (Forbes, BBC, CNN, The Guardian, the NYT, Pop Science, Vice, Wired, PC Magazine… you name it) that it made it, and its creator, instant “celebrities”. At a time when 3D printing was just starting to make real progress, it almost seemed as if all the good was being undone, by media outlets whipping up a frenzy and implying that anyone, including criminals and terrorists, could now print guns and take over the world.

After that it was Solid Concepts’ turn: they 3D printed a full metal gun. Once again just surfing the wave of media attention. Solid Concepts is a serious 3D printing services company and has been 3D printing highly complex stuff for years and yet the media picked up on the 3D printer M1911 replica right away. Which, although historic, was not even such an amazing feat. After all: gun parts are not that complicated to replicate and assemble.

This new project is definitely quite a bit “uglier” than its predecessors and details on it are not clear. It has a gigantic 6 bullet barrel that might or might not be re-used after shooting. One thing is for sure, its size makes it impossible to qualify it as a concealeable weapon and I doubt that any wanna-be gunslinger will want to be seen with it. It’s wouldn’t be an easy one to holster, for sure.