Parc – a Xerox company – has created a novel 3D printing tech called co-extrusion. The name refers to the machine taking two different materials and pushing them out through a single nozzle – without mixing them. The core principles behind this method are to allow the two distinctive materials to shape each other and thus enable the creation of micron-scale structures – which would be impossible to achieve via more conventional 3D printing processes. 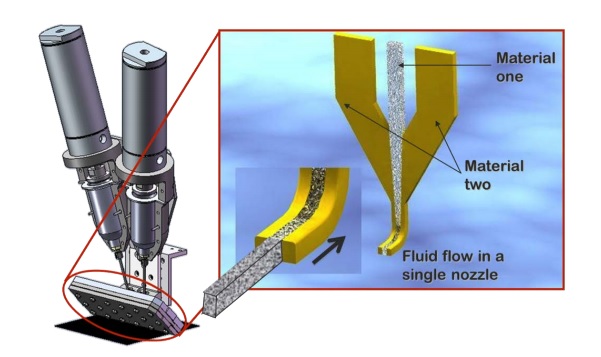 The materials that have been tested on the PARC device consist of viscous pastes including metals, ceramics and polymers, which can be applied to the printing surface in a customized manner – i.e. individually for each region of the final 3D printed structure. The method has already been tested and used in a pilot production line of a solar cell manufacturing company. Other potential applications include batteries, fuel cells, thermoelectrics, superconductors and nuclear fuels.

However, an even more interesting angle than the core of PARC’s co-extrusion – the tech itself – is its potential use in mass production. Creating a novel technology, which not only enables the creation of structures and objects that would be impossible to make in any other way, but also does it in a way similar to traditional assembly or other production lines – thus saving costs. This is a relevant angle for the whole future of the 3D printing industry, as for how to compete with the conventional manufacturing method lines and their scaled economic benefits – it seems that approaches such as the one PARC has developed might prove to be a winning combination – of both tech and cost-savings – in the future.