The Buccanneer Shows its True Specs: Too Little Too Late?

Just when you thought that the Buccaneer 3D Printer from Pirate3D couldn’t get any better… it gets worse.  Pirate3D has finally released the specs of their final machine, after obliterating Kickstarter with over ten times their already lofty goal of $100,000. And, needless to say, the Kickstarter backers are pretty pissed.

The Pirate3D website outlines the specifications for their Buccaneer FFF printer as follows:

The price of the machine on Kickstarter was $347, but for $100 more, you could pay to receive the Buccaneer in December, instead of April. The above specs leave a lot to be desired for backers of the project, especially for those December backers. While the project creators announced that, if they reached the $1 million mark, they’d include ABS support and a heated bed into the machine, as you can see from the specs above, they’ve dropped this feature. Not only that, but the promised automatic bed calibration, automatic filament feeding and air filtration system have also been left out. Since this has become relevant, the comments section of the Kickstarter project has exploded:

I backed this project just because of the ABS support (heated bed, air filtering, reliability with ABS guaranteed by Pirate3D! ). I don’t care about the ABS fumes… WE knew about that in the first place. I invested my money to help Pirate3D build a printer with these specifications, removing the heated bed, the air filter, auto-calibration, auto-feeding and some other nifty features is NOT something I will be supporting. If this is true I will want my money back! The Buccaneer has gone from a prototype machine to a toy to print PLA vases and figurines.

Aside from pure anger, they’re have also been calls to action, refunds and litigation:

Promising stretch goals and not delivering might as well cancel the whole project and give everyone a refund I for one will not stand for this and will seek a lawyer if I don’t get a refund we backers have to stand up to this crap we give these people our hard earned money and they should deliver. Now I know what some of you might say its an investment no where did i see this is an investment firm.

It seems that the Pirate3D team has been trying to figure out the solution to the situation. They have also promised that a software patch for ABS is in development and that a heated bed will be included in all shipments for April.  For early backers, this means getting their machines later than hoped, which may be better than nothing.  But, if you’ve simply had it all together, you can register for a refund from the company here. 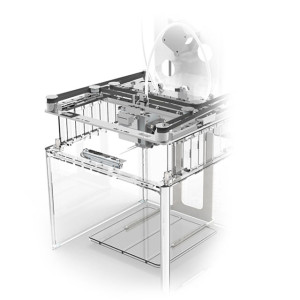 We’re living in a brave new world of crowdsourcing the stock market (thanks, Shane!) and dumb Facebook memes, so I guess it’s not surprising that these sorts of issues would come up.  Not to delve too deeply into the Kickstarter comments, but, as is the case with all comments sections, in this one, we begin to see people reflect on the general nature of humanity as a whole. Perhaps this idealistic Buccaneer backer has some words of advice for the Internet mobs:

I am amazed that, prior to stated updates due tomorrow, ‘backers’ on here are already salivating at the thought of ruining the company & its reputation (insert gag about them already doing this for themselves). So much for creating a community around a project. How about starting with a dialogue, rather than jumping in with threats from the get-go? There may well be work arounds for these issues, but can people not try being pleasant & reasonable in trying to establish them?

I thought that, when I found Kickstarter this year that I had discovered a different type of environment, where people would be supportive and thoughtful and, wait for it, even maybe nice to each other. However what it is turning into is the same sort of litigious, nasty environment as anywhere else.

Yes they have had a bunch of people’s hard earned money and with that comes a responsibility to deliver in accordance with what they stated. And they may even have made a mistake in the way this news was broken. But, really, setting up a chat room to organise a mass exodus? Writing a public post in some sort of quasi-legal jargon. Surely these are last resorts not opening gambits?

The alternative is a fairly jaded, cynical and depressing place to be.