Boneheads 2016: The Biscuit Your Dog Will Surely Elect

The United States presidential election cycle is quite often an entertaining and vicious event, one jam-packed with promises, personal attacks, and a lot of disagreement. The upcoming 2016 election seems to be following suit, but a Kickstarter started by the Chicago-based Funproductive is offering us candidates that anyone’s dog will be sure to vote for. Funproductive has created the Boneheads 2016 dog biscuit, treats that are modeled, using 3D printed molds, after the heads of this year’s most controversial presidential candidates.

The project offers crowdfunders the option of five different biscuit designs, featuring politicians such as Chris Christie, Jeb Bush, Ted Cruz, Hillary Clinton, and, of course, Donald Trump in the form of an all-natural, 3D modeled dog biscuits. The team uses 3D modeling to design the politician’s head and 3D print them into silicone baking molds. These 3D printed molds are then filled with a mixture of wholesome, all-natural ingredients to produce the detailed and nutritious Boneheads 2016 dog biscuits. Funproductive is not trying to replicate the standard dog treat with 3D printing technology, either; in fact, they’re priding themselves on using healthier ingredients and having more transparency then other big-market biscuit makers. 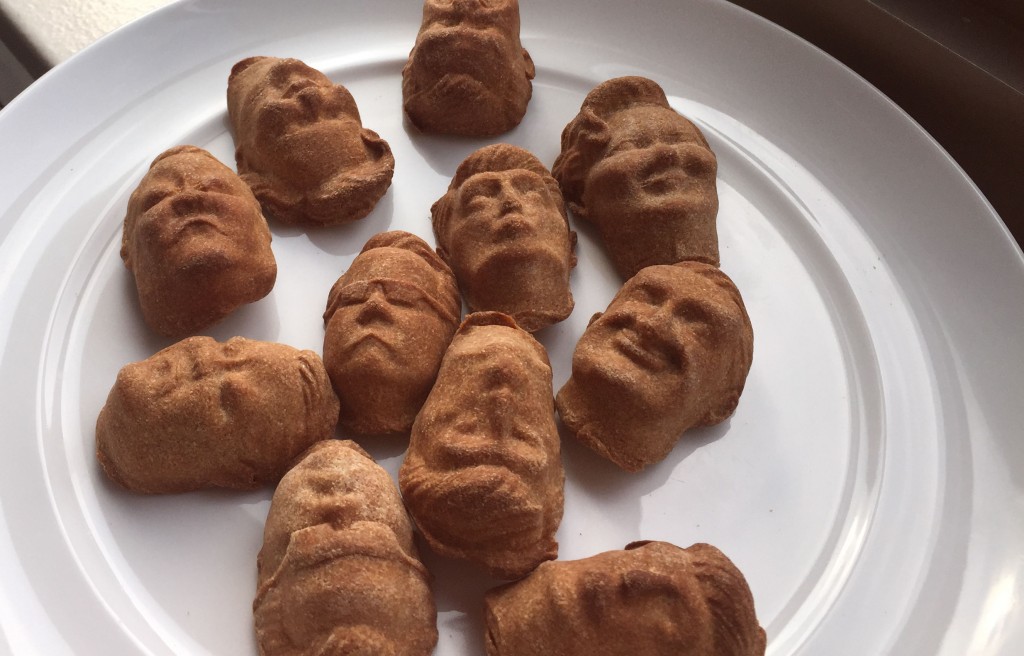 The biscuits are produced with whole wheat flour, butter, dry non-milk, egg, coconut flour, and peanut butter, creating an all-natural molded treat that will be loved by Democrat and Republican dogs alike. The Boneheads 2016 treats pride themselves on integrity, and are open about everything put into their biscuits, promising only to use ingredients that the average person can easily pronounce, unlike their dog treat producing competitors. Funproductive sees similarities between the dog food industry and politics, too. “Through learning about how to make dog treats, and learning more about the pet food industry, you could begin to see a striking resemblance to today’s political landscape,” says Funproductive CEO Jack Knott. “There’s a whole lot of filler – not a lot of real substance.”

The Kickstarter is hoping to meet its funding goal of $5,000 by October 15th, 2015, and is offering funders the opportunity get in on this tasty political action early. For instance, by backing the project with just $15, Funproductive is rewarding investors with a 2lb bag of their Boneheads, a mixed bag including all five edible politicians. They are aiming at shipping the Boneheads 2016 by November, right in time for the 2016 U.S. election cycle that is just starting to heat up. You may or may not be supportive of some of these candidates, but your dog will certainly find themselves in agreement with the Boneheads from every political party.