Well-financed corporations are no strangers to research, with nearly every large company even housing their own research and development departments.  And seeing such businesses partner with research institutions is common, too.  For instance, Organovo, the only publicly traded bioprinting company, is founded on R&D as it explores the possibilities of 3D printing human tissues.  Consequently, Organovo has partnered with schools like Yale to take its research further. But what if a service or retail shop were to do the same thing?

As I was speaking to Justin Finesilver, Operations Manager and part owner of The 3D Printing Store, I kept thinking to myself, “This has to be a first.” The 3D Printing Store, one of the first and largest 3D printing service chains in the US, is accustomed to providing 3D printing, scanning, and consultancy services, but bioprinting would seem like the last thing that a brick-n-mortar 3D printing shop would get into.  Yet, this is what Justin was telling me they’d done.

“As soon as we learned about BioBots’ beta testing phase – I think it was from an article on 3DPI – we called them up to get on their beta tester list,” he explained. “We originally contacted them in February, placed the order in March and, it took about six to eight weeks to arrive before we got the printer in May.” In its beta testing period, the machine had a price tag of only $5,000, which – even compared to high-end desktop 3D printers, let alone industrial bioprinters – is extremely low.  And, though it is now being sold, out of beta, at $10,000, the BioBot 1 is one of the most accessible bioprinting systems in the industry. 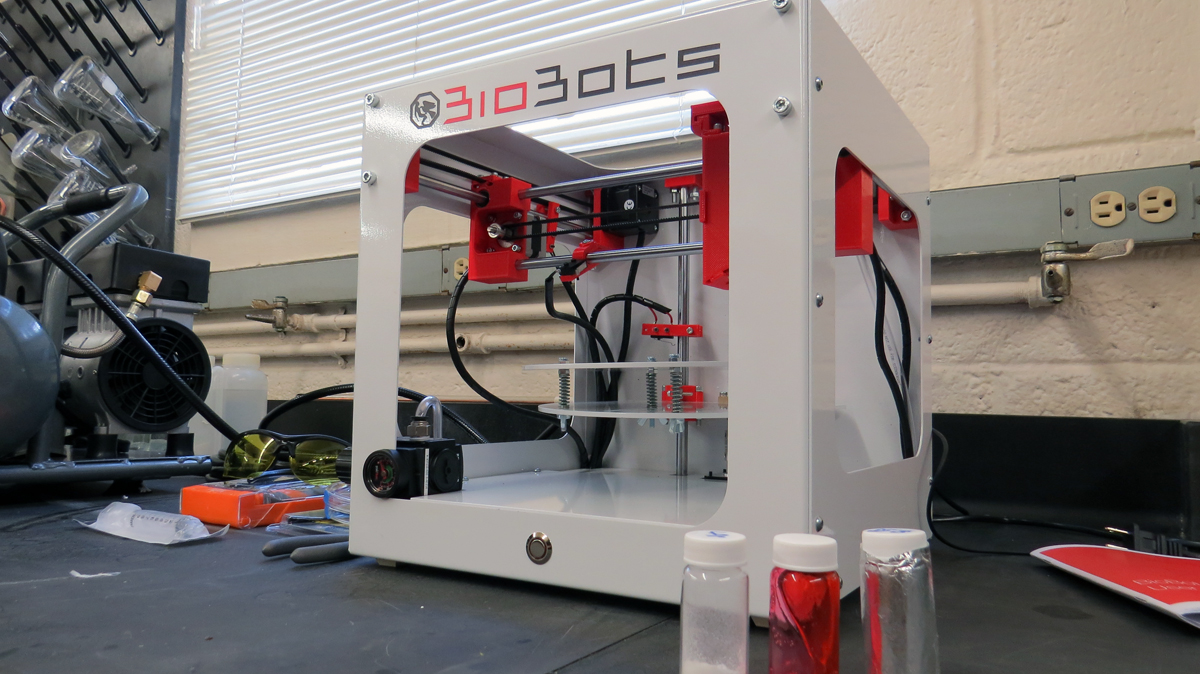 Founded by University of Pennsylvania students, BioBots has born out of the DreamIt Health accelerator program with a vision to democratize bioprinting research with their low-cost BioBot 1 bioprinter. The BioBot 1 takes the cutting edge science of bioprinting and packs it into a desktop 3D printer, not unlike an Ultimaker.  Only, instead of plastic filament, the BioBot 1 3D printer pushes biocompatible hydrogels – from polyethylene glycol and collagen to fibrin, gelatin, and Pluronic F-127 – out of its printhead (pictured below) with compressed air in layers as thin as 100 microns. 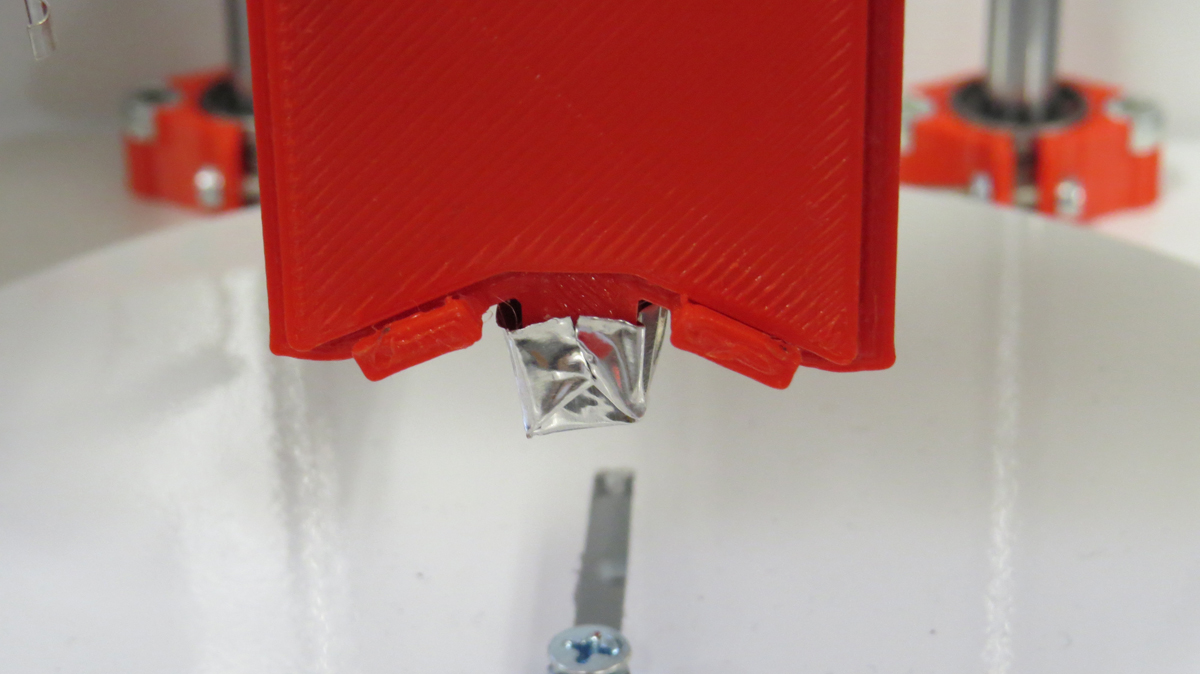 The key to BioBots technology is the company’s visible blue light that instantly cures the material as it is extruded onto the printbed. This light is both safe to BioBot users and maintains the viability of the cells on the plate.  Additionally, the heated extruder mimics the warmth of the body, preventing stress from affecting the living cells.  As the BioBot 1 comes out of beta, it will be bringing with it a dual extruder upgrade that allows for the simultaneous printing of living cells and support structures or multiple types of tissues at once.

“Of course,” Justin continues, “we don’t have the facilities to perform the proper work with a bioprinter – cell culture hoods, incubators, refrigerators.  So, that’s why we connected with the University of Denver.  We basically gave them the printer and said, ‘here are the keys.’”  Since they were able to get the BioBot 1 to the school, the University of Denver has been experimenting with the machine to produce some exciting results. 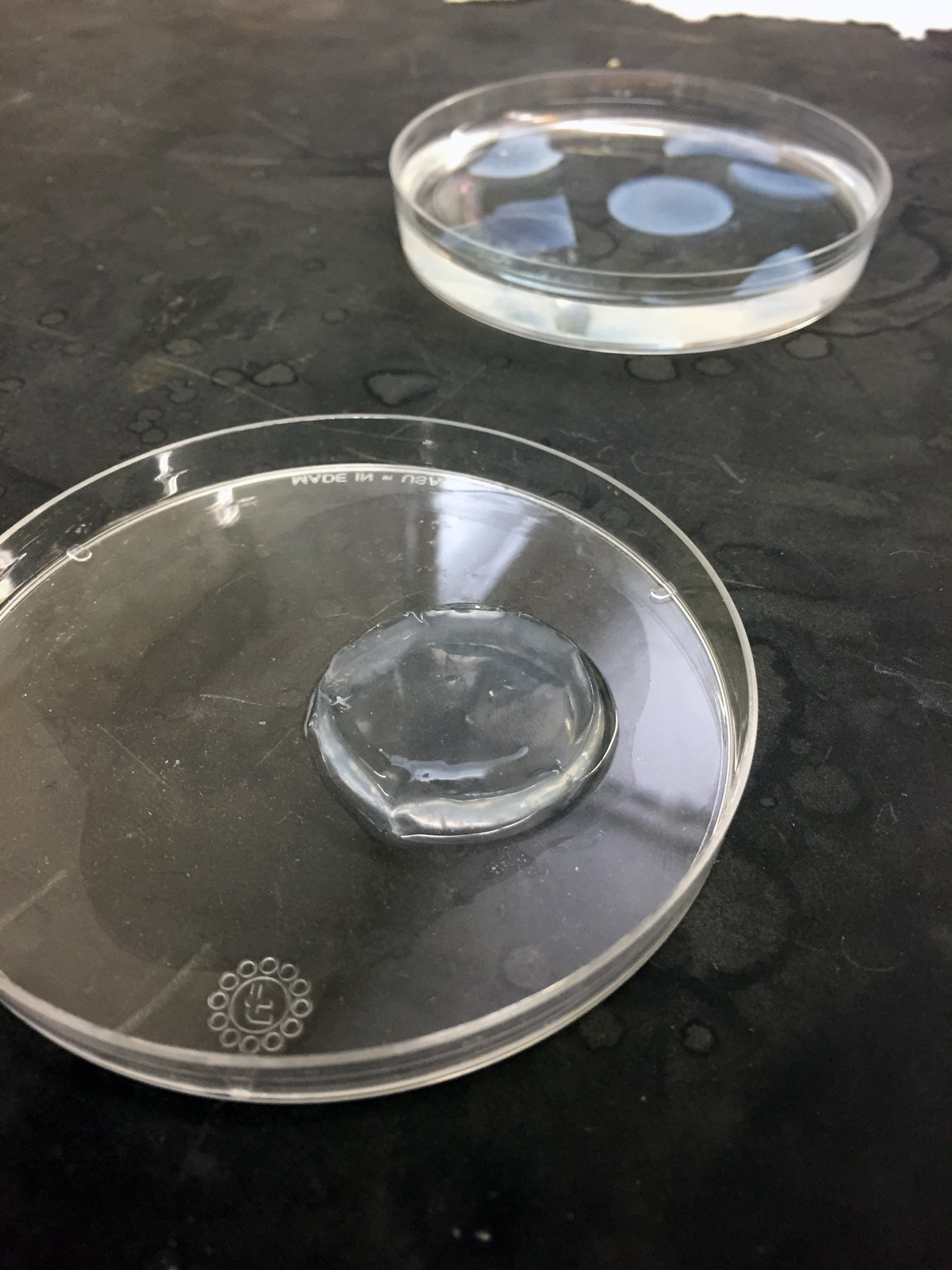 “Bioprinting gives us the opportunity to construct complex biocompatible structures by using the chemistry of natural molecules like collagen to transform gel into a resilient viscoelastic material,” says Ben Stewart, an MS Bioengineering Student Researcher in the Department of Mechanical and Materials Engineering at the University of Denver’s Daniel Felix Ritchie School of Engineering and Computer Science. “Using pure forms of these types of molecules, in their most basic form, it becomes possible to shape geometry before reconstructing the matrix of interconnections.”

To the left is a structure made of material that will be used to build collagen structures.  Though the school is still performing its research and, as a result, is reluctant to share too much information, they have said that they are exploring the bioprinting of heart valves for possible transplantation. Stewart continues, “We are using the technology to look at creating heart valves from various biopolymers and biocompatible synthetic polymers that are compelling as the future of heart valve replacements.”

Naturally, a good deal of bioprinting research occurs in the university setting, but BioBots is ushering in an era of low-cost bioprinting, dropping the price barrier to the point where an even greater number of schools can incorporate the technology into their programs.  For instance, earlier this year, we reported that Michigan Tech was also participating in the beta program, using the BioBot 1 to explore 3D printing nerve cells.  Currently, Associate Professor Tolou Shokuhfar’s In-Situ Nanomedicine and Nanoelectronics Laboratory is 3D printing biocompatible polymers that resemble nerve cells with the hope of bringing graphene into the equation to make them conductive. Similarly, teams at Stanford, Penn, MIT and Drexel have been 3D printing tissues like bone, liver and brain cells.

Debra Wilcox, Owner and Founder of The 3D Printing Store, elaborates, “We know how important bioprinting is. We are not locked into the technology of today, but are helping to define what 3D printing is becoming.” She continues, “Everyday we see new and interesting real world applications of 3D printing.  We intend to serve our customers and meet the challenges they present to us and by pursuing the best the 3D printing technology we can find.”

“Since the beginning, we’ve been about accessibility. We wanted to make 3D printing accessible to people and, now, we want to do the same with bioprinting.” Justin says. “We could certainly arrange appointments with the lab for people to come in and learn about the technology. Of course, you can’t just walk in, but I guarantee that our bioprinting work is a lot more open to the public than the other companies in the business.”

In some ways, the move by The 3D Printing Store is an extension of their existing business model.  Though they have some machines in shop, at each of its seven locations throughout the US, The 3D Printing Store partners with local service providers to expand its portfolio, which includes industrial FDM, SLS, DLP, and more.  Working with the University of Denver, then, would almost be like finding a local bioprinting expert to add that technology to their line-up, except that bioprinting is not at the same maturity level as these other processes. Asked if they might partner with other research institutes for bioprinting, Justin says that it’s a definite possibility, which would open The 3D Printing Store up to connecting with universities in Iowa, Utah, and Texas, in addition to Colorado.

But, if the technology really did progress significantly down the line, Justin imagines, in a sci-fi future, The 3D Printing Store providing bioprinting services, as well. “It may not be in the near future, but, with the democratization of medicine and how medicine has moved into the digital space, one day, people could walk into a retail space or a doctor’s office and 3D print an ear.” Justin concludes, “It could be that accessible.”

Justin admits that he doesn’t know what that scenario would look like, but says that it’s that accessibility that got The 3D Printing Store into this business in the first place, to bring a high-tech process like 3D printing to everyday people.  With its equally accessible BioBot 1 3D bioprinter, BioBots is a perfect match for the service shop.  And, by being the first 3D printing service shop to get into the bioprinting space, The 3D Printing Shop could play a key role in making that sci-fi future accessible, too.