As REAL 2015 is well under way, with 3DPI’s Andrew Wheeler on the ground attending the event, Autodesk has made its first big announcement to establish the ubiquity of reality computing. Previously, the software giant had opened up its Memento reality capture project available as a technology preview, for users to handle large 3D meshes created from photos and scans. With the kick-off of REAL 2015, the company has opened it up to public beta, so that anyone can download Memento and begin capturing reality data via the cloud.

With a combination of desktop and cloud-based computing, Memento is able to process scan data during live scanning and generate 2-billion-polygon meshes for creating 3D models for a variety of purposes, including 3D printing. In addition to the ability to use directly capture information from laser and structured-light sensors, Memento can stitch photographs taken from multiple angles into 3D models. In addition to the ability to register 3D data, Memento also allows for the editing of 3D models, cleaning up noise, filling holes (manually and automatically), and exporting into a variety of files or into a web-based portfolio.  And, with Memento’s built-in 3D printing support, objects can be sent directly to 3D printers or services.

You may also recognize the photogrammetry capabilities of Memento from Autodesk’s consumer-friendly 123D Catch app. Unlike 123D Catch, which limits the number and size of photos that can be uploaded to the cloud for 3D processing, Memento currently processes 250 photos, with more to come according to StudioDaily, with no resolution limits, leading to models of much higher resolution. The software also pairs well with Autodesk’s other software, including the company’s 3D scanning software, ReCap. 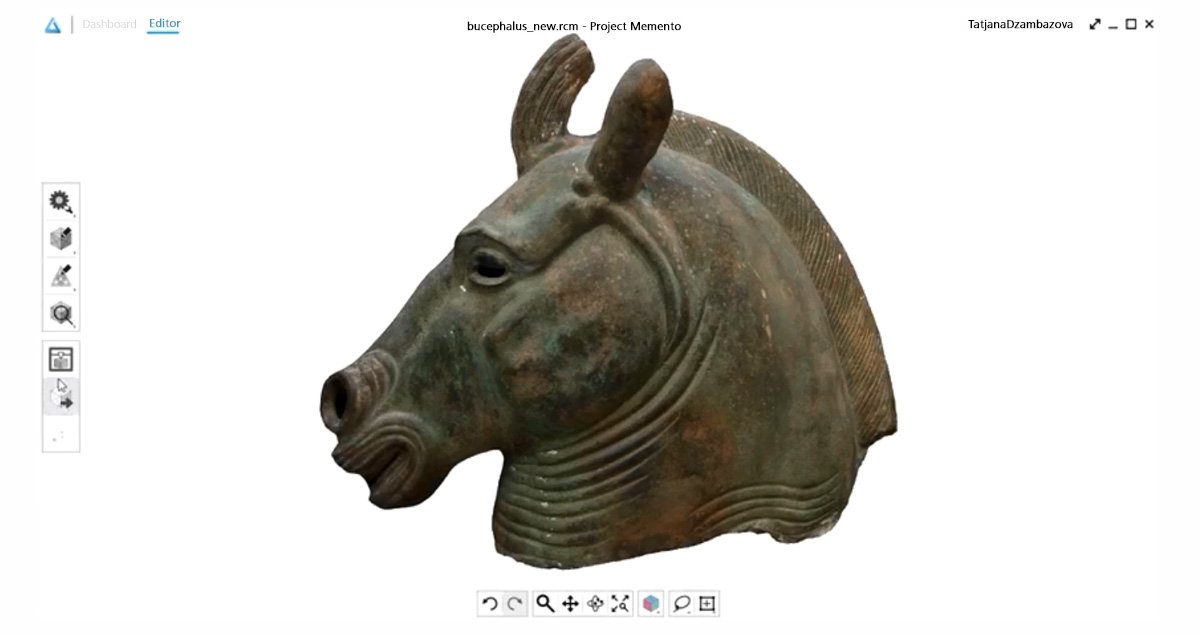 To demonstrate the possibilities of Memento, the Smithsonian utilized the software in their extensive Smithsonian X 3D project.  You’ll remember from previous posts on 3DPI that the Smithsonian X 3D site contains numerous historic artifacts scanned by the institute that anyone can manipulate.  The Smithsonian’s Autodesk-powered project is meant to ask as case study of how any museum or organization, such as Louise Leakey’s africanfossils.org, might convert their reality data into digital data for other ways to present such objects to their patrons.  Autodesk Senior Product Manager Tatjana Dzambazova elaborates, in an interview with StudioDaily, “We show the objects as beautiful as they are in real life. We’re not talking about a 3D viewer. It is really about exploration at many levels, for aficionados and end users, but also for scientists to tell the story in a 21st century way. You can deepen the relief of the 3D objects, color them, add hotspots, and create a tour so that when you’re in the explorer, you can go over what the curator is telling you or you can explore on your own.”

In terms of pay, she adds, “The cloud enables us to be very flexible. You could pay by use, by generated 3D mesh or by exported model. With Smithsonian X 3D Explorer, we’ve prototyped an entire multimedia-rich in-browser tool, so maybe you would pay by number of viewers.” The software is currently free and will likely remain so until the end of the year, but the payment system may change, according to Dzambazova.