At Inside 3D Printing in Santa Clara two years back, Senior Vice President and Chief Technology Officer of Autodesk Jeff Kowalski became known for saying, “3D printing kind of sucks right now.” The software manufacturer has since been trying to solve that problem in a number of pretty exciting ways. It first began with the release of Autodesk’s Spark platform and the Ember 3D printer, which is designed to tackle such issues as speed, reliability, and resolution in desktop 3D printing.  The latest development is Project Escher, which seems to answer just about every sucky bit of 3D printing you can imagine. 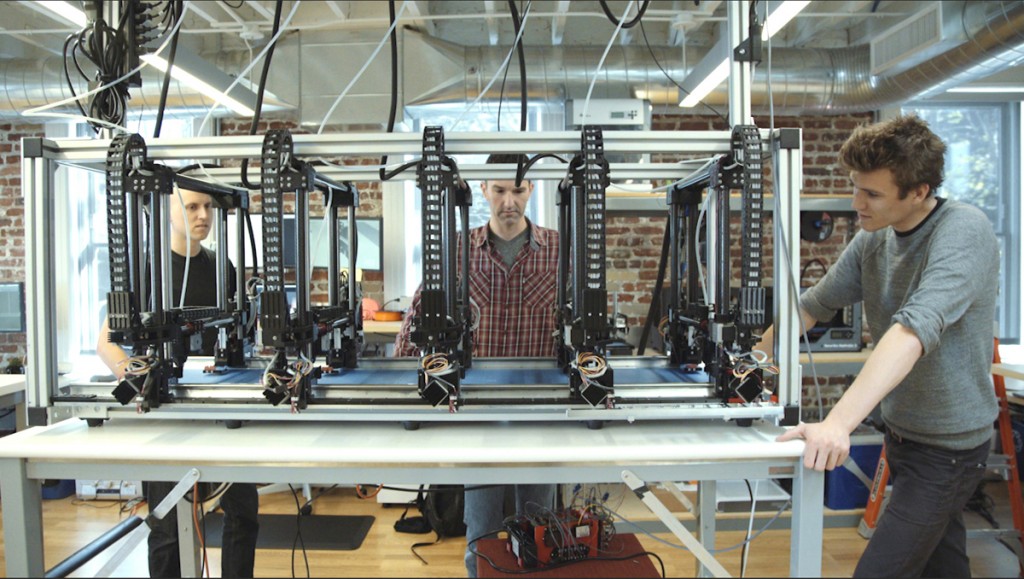 Project Escher is a pretty massive machine, figuratively and literally.  Made up of an assembly line of toolheads, the system is designed to work on large objects and quick speeds.  It does this through a unique software developed by Autodesk to allow each toolhead to work on different parts of an object at the same time. This process of “collaborative fabrication”, as Autodesk 3D Printing Research Scientist Andreas Bastian calls it, sees one computer, dubbed “The Conductor”, orchestrate a symphony of motion on the workbed through the firm’s Conductive Player software architecture.

While Project Escher has so far been used to demonstrate the collaborative 3D printing of a large-scale object, it’s important to note that it is not limited to additive manufacturing.  Autodesk Hardware Lead Cory Bloome explains that the toolheads can be switched out for other fabrication processes, like hot staking and pick-and-place technology.  In other words, Project Escher is really a completely factory in a box.  And, though the existing setup is already quite massive, it’s easy to imagine the system being scaled up to an industrial scale, with some robot arms performing the extrusion process, while others weld and pick-and-place components.

For this reason, the software behind Project Escher is really the key.  Autodesk will not be releasing a new 3D printer, but Bloome has said that he could see the software being easily implemented in FDM technology. Paste Magazine reports that Bastian told an audience at their San Francisco offices that the company is working on partnerships for its Escher software, with hopes of seeing a 3D printing assembly line installed in a manufacturing setting by 2017 or 2018.