Public/media hysteria over 3D printed weapons may once again be reignited after police in Queensland, Australia raided the home of a 28-year-old man and found, alongside a sawn-off rifle, ammunition, and marijuana, a handful of 3D printed gun parts and knuckle dusters. 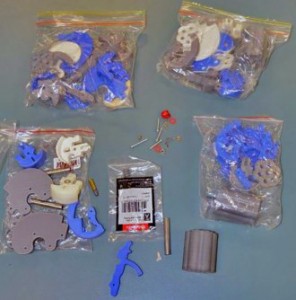 Detective Inspector Scott Knowles, of the Queensland Police, recounts to the local news that the plastic parts found in the man’s home were almost all of the essential pieces to a larger weapon, saying, “We’ve obviously got to get it through our ballistic experts but we can identify most if not all of the major components of a weapon. To us it appears that they are complete weapons just requiring assembly.” In addition to the firearm parts, the police also discovered a set of knuckle dusters, which would otherwise be referred to as “brass knuckles”, if they weren’t made out of cheap plastic. 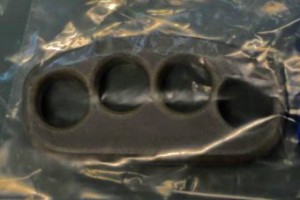 The plastic weapons were not the main focus of the investigation, as the raid was conducted by an organized crimes firearms investigation team who were more concerned with the mass manufactured rifle found on site.  The police are charging the suspect with a weapons charge for the sawed-off rifle, but are not denying the potential dangers of 3D printed guns.  Inspector Knowles commented, “The technology’s dangerous [because for the] weapons they’re trying to design the materials they’re using aren’t able to sustain the sorts of forces that come as a result of the weapons they’re trying to discharge. It could detonate in their hands which is going to cause them serious injuries but then, obviously, it’s a firearm so that then raises issues for the general public as a result of the fact that it is a weapon capable of being discharged.”

As has occurred in the United States, members of Queensland Parliament attempted to regulate the 3D printing of firearms last year, but, also like the US, the bill was rejected.  As dangerous as any gun might be, 3D printed or traditionally manufactured, lawmakers have opted to regulate (or fail to regulate) guns as a whole, instead of focusing specifically on those fabricated on 3D printers. And, as Knowles pointed out, the threat of a 3D printed firearm over a mass manufactured weapon is that it has a likely chance of exploding and injuring the person firing it (as demonstrated by the ATF in the video below).