The open source and Creative Commons protection debate may be about to hot up in the 3D printing and Maker community. Nick Colleranos from Toronto, Ontario, Canada has not just copied the world’s second lowest priced 3D printer, the recently Kickstarted USD$247 Buccaneer by Pirate3D, for his own IndieGoGo campaign: but their entire crowd-funding campaign—text, graphics and all. He has also made some claims that many will find outrageous…

“We have two offices, our admin and marketing side is located in Palo Alto (which will also be the branch that will handle all US orders), one in Toronto, Canada and our main Engineering division is located in Singapore.” read Colleranos’ claim.

Colleranos, whose campaign has since been taken down by IndieGoGo, attempted to claim $347 for the 3D printer… USD$100 more than the companies price for their 3D printer, which is due for release from Pirate3D at the start of next year. 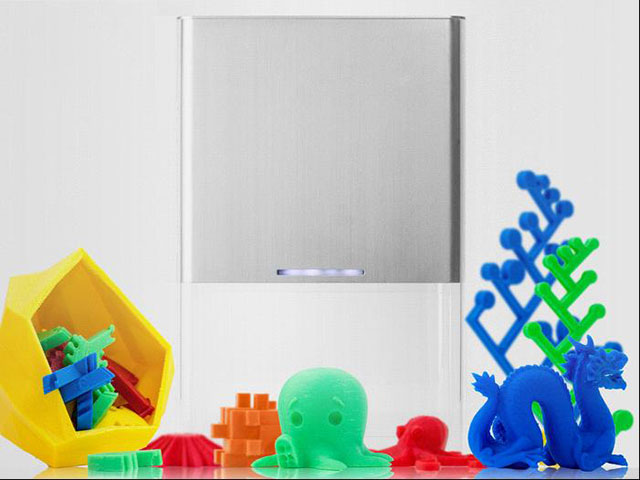 I witnessed this in the wee small hours of Sunday morning (UK time), taking a few seconds to swallow my disbelief: “Is it a second printer by Pirate 3D, seeking to further push the boundaries of high quality, low cost home FFF / FDM with a slightly higher grade 3DP?”

No, it was indeed as bad as it looked it could be. The whole campaign literally copied and pasted from Kickstarter to IndieGoGo, an exact clone. No credit given to Pirate3D, no attempt at even an ideological explanation. Simply, directly, fraud. 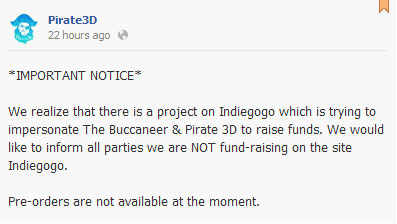 IndieGoGo have a policy of attempting to vet projects that are uploaded for potentially fraudulent campaigns:

‘All campaigns and contributions go through a fraud review, which allows us to catch any and all cases of fraud. If we find fraudulent contributions on your campaign, we may remove them from your campaign Funds and Fulfillment pages.’

‘By way of example, and not limitation, your promise means you will not use the Service:

c. vi. Impersonate another person or otherwise misrepresent your affiliation with a person or entity, conduct fraud, hide or attempt to hide your identity’

For those seeking careers related to the 3D printing industry, who feel that they may have the knowledge and experience to stop these kinds of attack on open source IndieGoGo are currently advertising for a Fraud Analyst to join their team.

Whilst on that subject, if you are living in, or willing to relocate to, Singapore, Pirate3D are also hiring.

I’ll leave you with the link to the Buccaneer’s Kickstarter campaign, which mustered a crew of some 3,520 backers, and a hoard of USD$1,438,765 for their treasure of a 3D printer. This is a battle that hard working innovators won, leaving an individual who tried to use pirate-greed over pirate-sharing left right out at sea.