Terry Wohlers said it clearly in the latest report on the state of the global 3D printing industry: organic growth is taking place primarily in the industrial metal additive manufacturing sector and the interim financial report published by Arcam, one of the leaders in this segment, is confirming it.

The Swedish Electron Beam Melting (EBM) systems manufacturer is reporting a 21% growth in the six months period between January and June 2014, with revenues for 111 million Swedish Krona (SEK), equal to about €12 million, and net profits for 3,9 million SEK (about €400 thousand). These were obtained through the sale of 16 systems of which 11 were delivered during the period and means the company is now comfortably sitting on 377 million SEK (€40 million). 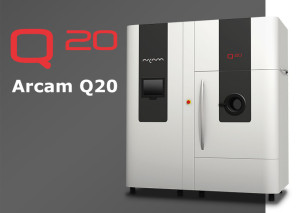 This is not, however, the only good news coming out of Arcam. Apart form the cold sale numbers, Arcam is reporting a rapidly growing interest from the primary fields it is servicing, medical implants and aerospace technologies, for using EBM machines (including eight orders for the new Q20 system) to produce more and more end use components. The company led by CEO René Magnus is thus investing heavily in its organic growth.

Through the acquisition (completed on February 11th), of Canada based AP&C, a leading manufacturer and supplier of titanium powder specifically for AM (through its proprietary Plasma Atomization Technology) the number of Arcam employees has more than doubled from 55 to 113. Arcam has also acquired its agent in the UK and strengthened its service office in China. This growth is expected to continue throughout 2014 with an order book of 17 systems and increasing aftermarket sales.

Seventeen may not seem like a large number of products but when you talk about EBM systems you have to consider that each machine is a technologically advanced factory in and of itself. There are not many companies out there selling 17 full factories every semester.