An Introduction from Mark Lee, Writing for 3DPI from South Korea

I grew up in the 1980’s when the PC first made its appearance, but I was too young and inexperienced to appreciate the disruptive influence that that contraption would bring. I watched as the computer grew from the province of a few geeks into all aspects of daily life.  From business, it spread to the home, and finally to personal portables…there is nowhere today that has not been touched by that technology.  I also came to see the internet grow from a narrow email curiosity to an entity that many (including myself) cannot imagine living without.

Like many people I became aware of the 3D printing movement by chance, tripping over a random video talk on the internet, and I was immediately smitten by this technology’s transformative potential. I began to read and watch anything I could lay my hands on relating to the topic, trying to educate myself on exactly what this tech was, and what it was not.  My enthusiasm grew by leaps and bounds as I imagined how this technology was going to grow and alter our world.  Within a short period of time I found myself the proud owner of a new 3D printer. 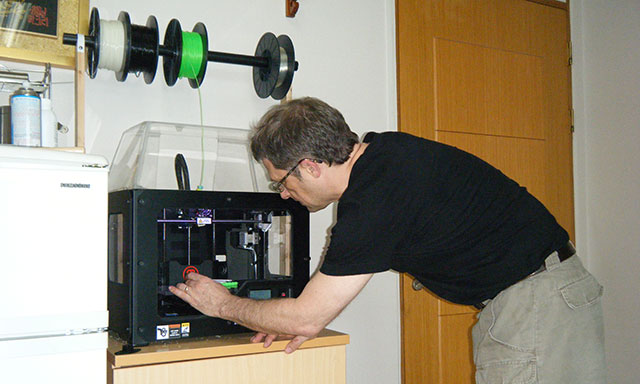 I live and work in South Korea. This is a nation that enjoys one of the fastest internet systems in the world, has one of the most technical savvy populations anywhere and yet 3D printing seems to be having a bit of a slow start. I often encounter people who are dismissive of this technology as something only useful for professional designers and engineers, which, of course, it is, but I believe it is so much more than that too, which chides the professional educator in me to action.

At the university where I work, I have begun to design and construct some new educational and extracurricular technology programmes with the assistance of a few key student leaders. Our goal is to fire the imaginations of our young people and to network them with other universities, organizations and groups. My hope is that young people globally will network with one another and help move this new and exciting technology into an era where its capabilities can be explored and developed to service all parts of the planet, so that all people can share in the abundance that 3D printing promises.

Our project is exciting to us for a few important reasons. First, my students are not engineers, but rather come from a variety of academic disciplines. Engineers and engineering students are already familiar with 3D design and manufacturing techniques, whereas my students (and in fact the majority of students in most universities) are new to these ideas. Since 3D printing has the potential of becoming more and more user friendly, just as computers did, it has the potential to not only decentralize manufacturing, but to decentralize design and manufacturing expertise.  Microsoft recently announced that its new operating system, Windows 8.1, will natively support 3D printing platforms. As new software and software interfaces are developed, moving away from the traditional “computational” models of the past toward more intuitive processes, like Carnegie Mellon University’s Alice program, the design process will be opened up to more and more people who do not understand or like traditional CAD programming.  (Note: Alice is not a CAD program, but is merely used as an example of how programming, and other traditionally difficult computer tasks, will become easier and more intuitive.)

Second, many of my students are young women. Most designers and manufacturers have historically been male, and as a result most of the tools and manufacturing processes created, and the world that results from those creations, has a distinctly male feel. This strikes me as a problem that needs to be corrected, as currently half of the human race’s brain power is being under-utilised and often ignored. What kind of world would we have if men and women were more equally involved in the design and manufacture of the things we all use and need?  What impact would this social change have on global politics and economics?  Men and women see the world in fairly distinct ways, and to be given the benefits of having both the visions and creativity of men and women would certainly benefit us all.  This is not a “woman’s issue” nor a “man’s issue”, it is a human issue.

From my point of view, the future looks very bright indeed. I hope that through the articles I will be writing here for 3D Printing Industry — with a focus on what’s happening here in South Korea — that you can share in the excitement, promise and progress that this new technology has the potential to bring us all.