Back in November of last year, GE Aviation (a GE subsidiary and a global producer of jet engines) announced its acquisition of Morris Technologies and sister company RQM, citing critical investment in emerging manufacturing technologies for a positive future. The crux of this acquisition was to bring industrial grade additive manufacturing into GE.

Last week, at the GE Summit on the Future of Manufacturing the company revealed progress it is making in this area and GE’s CEO, Jeff Immelt provided further insight into just how critical additive manufacturing is within the organisation’s strategy for the future.

Progress centres around R&D into ceramic materials, which are harder and lighter than steel, resist corrosion better and can handle more heat. Despite these advantages ceramics are not a material group you will find anywhere near an engine, for obvious reasons, the most obvious, according to GE is ‘hit it with a hammer and it shatters.’ But, apparently — that’s about to change.

GE Aviation (aka Morris Tech) have been collaborating with scientists at GE Global Research (GRC) to develop a new kind of ceramic that outperforms the most advanced metallic alloys — ceramic matrix composites (CMCs) —within a gas turbine and jet engine environment.

According to Robert Klacka, Technology Marketing Manager at GE Ceramic Composite Products: “Our materials have the strength, durability and manufacturability that other ceramic composites lack. I don’t know if I would have said it 10 years ago, but I can say it now. I’ve seen it.” And collaborative team have also been working on machines that will process the material — additively. 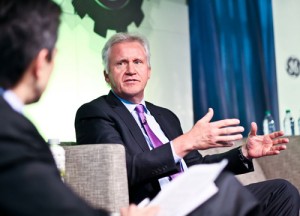 Jeff Immelt, GE’s CEO was present at the summit and made his feelings known about how important additive technologies are for the future of GE.

“3D printing makes unique shapes with high tech material, in a quick period of time, that is worth my time — and a lot of investment. 3D printing helps you make product from the core up so you basically don’t have much waste. The tool is cheaper, the recycle time is faster. That’s the Holy Grail.”

This is backed up by Luana Iorio, who leads manufacturing research at the GE’s Global Research Center (GRC): “It’s one of the biggest things to happen in manufacturing in some time. You give the designers a completely new freedom. They are not bound by the constraints of traditional manufacturing. They can really strip down products to the core of what it is they need them to do.”

Michael Idelchik, VP of Advanced Technologies at the GRC believes 3D printing “has the potential to fundamentally disrupt how complex products like jet engines are designed and made in the future. And we believe that the U.S. is well positioned to lead the way in its growth and development.”